Brandon Barash Returns To Days Of Our Lives Next Week 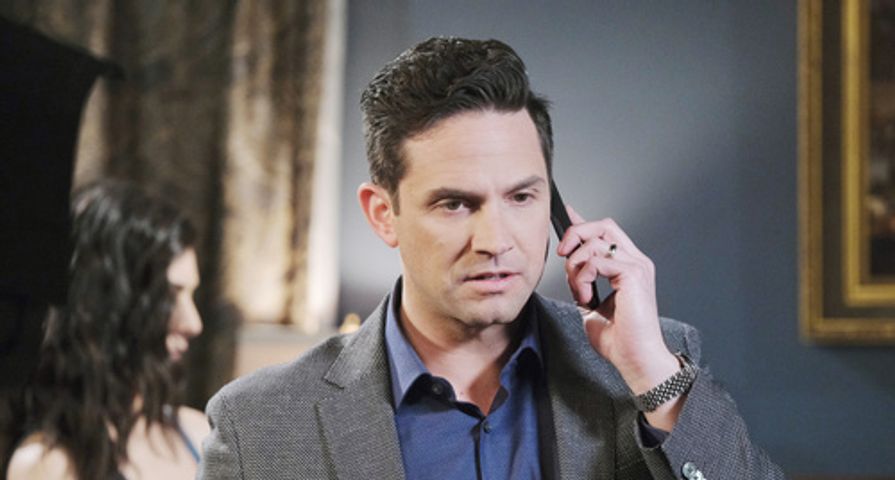 Brandon Barash, who portrays Stefan DiMera, will be returning to Days Of Our Lives (DOOL) the week of April 20, according to Soaps.com.

Barash was recently seen in the DOOL spring preview video. In it, Gabi Hernandez (Camila Banus) saw a reflection of her late husband in a store window. Spoilers tease she will be convinced he is alive and will head on a journey to get to the truth.

The actor had played the role of Stefan since March 22, 2019, when he took over the part from Tyler Christopher. He quickly became involved in a turbulent and passionate relationship with Gabi DiMera (Camila Banus). The pair eventually admitted their true feelings for each other and were married on July 31, 2019.

Stefan passed away on DOOL on October 4, 2019. Just days earlier, he had risked his own life to save his mother Vivian Alamain (Robin Strasser). Before he passed away, his heart was donated to Julie Williams (Susan Seaforth Hayes). Barash’s last appearance as Stefan was as a ghost, speaking to his devastated wife just before his funeral took place in late October.

But will Barash be returning as a ghost or a doppelganger, or was Stefan really alive all along? And will fans be treated to a sweet Stabi reunion next week? Keep watching DOOL to find out!

Calling all Days of Our Lives (DOOL) fans! What’s coming down Salem’s pipeline this following week? Seems like a love triangle could be emerging between three fan favorites and a wedding could get crashed. Also, someone is going to get some bad news. Learn about these storylines and others in the DOOL spoilers for the week of April 13, 2020.

DOOL spoilers tease that Xander and Sarah will prepare for the wedding this week; however, much like any other weddings in the little town, things might not go as planned. With the reveal around Mickey’s baby swap already unraveling, it seems as if things will hit fever pitch in the coming days.

DOOL spoilers also reveal that Sarah will make an unexpected decision mid-week. Does she decide to marry Xander after all, despite knowing what he’s done? Could he convince her to do the unthinkable by marrying him and then leaving town with Mickey in tow? She also could very well decide to marry him, but then leave him at the altar, right before the couple says, “I do.”

At least these two still seem solid! According to DOOL spoilers, Eric will receive a ton of support and comfort from Nicole this week. Eric has been terribly upset since learning the news that Mickey is not really his baby and the child was swapped and is Kristen and Brady’s. The only silver lining in all this is that he can still be a part of Mickey’s life moving forward, but as an uncle, only.

DOOL spoilers hint that Steve will finally remember who Kayla is (at some point next week). For fans immersed in this week’s show, Johnson is about to go through a procedure to rid himself of Stefano. He will wake up, and probably won’t remember who he is, but as the days go by, he’ll start to regain his memory, and the love he had for Kayla. Seems like a love triangle may be on the horizon.

DOOL spoilers relay that once Steve remembers Kayla, it seems as if his “Sweetness” will have some explaining to do. Teasers state that she’ll inform Steve that she and Justin are an item now. Interesting that she did this from the get-go, and didn’t have him believing that she was single, or that they were still together.

Meanwhile, across town, Justin may be shaking in his Kiriakis boots. After all, Steve is the great love of Kayla’s life, plus the father of all her children. With that said, DOOL spoilers reveal that Jack will offer up a pep talk to Justin, encouraging him to fight for Kayla, their relationship, and their love.

Lots going on with Marlena and John this week! First, John will have to break the hard news to his wife that Orpheus is still alive. Will he also let her know that their foe also happens to be David’s grandfather? In an interesting turn of events, Jarlena will also intervene in something, on behalf of Kristen. Does this have to do with Mickey?

Actress Dasha Flynn is set to enter the land of Days this week when she jumps into the role of Marta, a Salem University worker. Seems like the character is set to have some scenes with Kristen DiMera in the coming days, and fans should expect to see Marta pop up early on in the week.

As per DOOL spoilers, Hope will continue to struggle with what she did while was Princess Gina. Should she be so hard on herself? After all, she literally wasn’t herself when Gina did all those terrible things. It’s time for Hope to move forward on all this, and perhaps this is all setting her up for a new storyline. Maybe she and Steve bond over the year they lost, thanks to Stefano DiMera.

Lastly, Rafe is set to get some unsettling news this coming week. it seems as if Zoey, Evan’s lawyer, will be the bearer of this news. This obviously has to do with David, to some capacity, and Rafe will be taken aback with whatever Zoey has up her sleeve, which is probably something sneaky and underhanded.