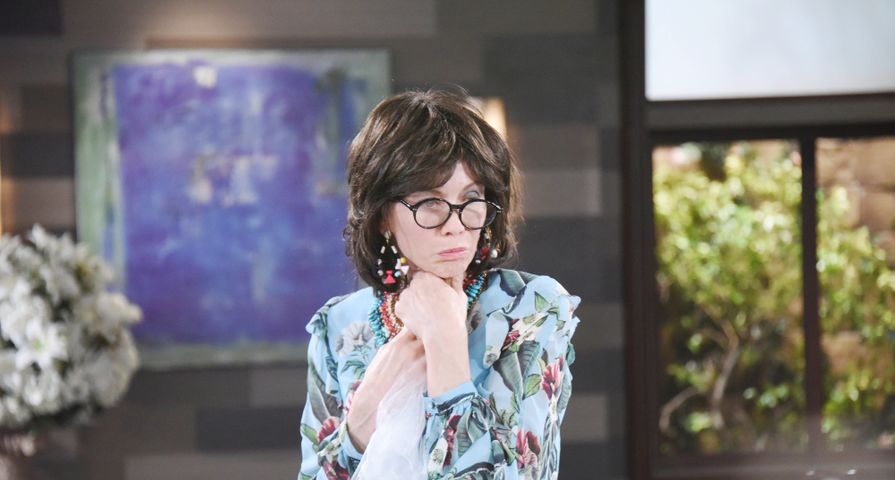 Soap operas are infamous for over-the-top storylines, and no one does this better than Days of Our Lives (DOOL). From island adventures to romances, and battling for corporate supremacy, a lot of characters can get hurt, and even pass away from these larger-than-life arcs. With that said, while characters can be erased from the canvas, no one is ever really “gone” from the world of daytime drama, and more often than not, someone’s demise from a show just means there is an even bigger comeback on the horizon. Below are some DOOL characters who passed away, only to come back to “life.”

The younger brother of Victor, Deimos wasn’t exactly the “good” Kiriakis kid, and arrived onto the Salem scene in 2016. He caught the eye of Chloe Lane and Kate Roberts; however, he seemed the most smitten with Nicole Walker, once time wore on. In the summer of 2016, a jealous Kate would push him down a hill after she found out about him and Nicole. He would hit his head on a tree stump and would fall into a river! While everyone thought he was a goner for good, Kiriakis would turn up very much alive later that year.

With actor Thaao Penghlis playing look-alike DiMeras in Tony and Andre, sometimes it’s hard for Days fans to follow who was who at any point in the show’s history, especially since Andre paraded around as Tony for a significant amount of time. With that said, Tony did pass away in 2009, only to return in 2019, all thanks to Dr. Rolf and his experimental treatment.

Speaking of, Rolf can be attributed to saving many a Salemite over the years, and a huge character return unraveled on December 31, 2018 when Jack Deveraux showed up alive and well. Sadly, Jack passed away essentially saving his daughter from an elevator accident in 2012. While fans were devastated by the character loss, as Deveraux was always a huge favorite, thankfully DOOL writers were able to come up with a storyline that brought Jack back to Salem.

Back in the early 1980s, Roman and Marlena reigned supreme as Salem’s “It” couple. They got hitched, and before everyone knew it, twins Sami and Eric were born. Sadly, a fight with Stefano DiMera left everyone thinking that Roman had passed away in the mid-80s. It would take years for the “real” Roman to surface, as there was a time when everyone thought John Black was really Roman, but it all got sorted out, and is now all water under the bridge.

Interestingly enough, there was even a time when Marlena was thought to be a goner! Some years after Roman came back to life (who was really John Black), Marlena seemingly met her demise too. Who was at the helm? Stefano Dimera, of course! He would end up kidnapping her, circa 1987, and while Roman followed him and almost saved his wife, Stefano whisked her way on a plane that later exploded. Don’t worry DOOL fans! She ended up being okay, and returned to Salem five years after the entire ordeal!

John Black couldn’t escape Stefano at one point either! A few years back in 2007, he and Marlena were written out of storylines, with an arc around the idea that he met his demise after a hit-and-run accident. The bad news was he got kidnapped by Stefano DiMera (for his kidney); the good news, though, was that he was very much alive and fans get to enjoy him onscreen to this very day!

Explosions are always a good way to ax a character, as it opens a door around a potential return (especially when no one can confirm a body). Such was the case when Hope Brady was thought to have passed. This was during the early 1990s, when she and Bo got wrapped up with Ernesto Toscano. He would end up kidnapping Hope and holding her hostage in a cave. When the cave exploded, everyone thought she was gone for good, until Princess Gina emerged in 1994.

Yes, explosions, boating accidents, and plane crashes can often create a smoother transition to help with a character return. So, it was really awkward when news hit social media that actor Chandler Massey (Will Horton) was returning to DOOL 2017 to potentially reprise his role. After all, Will met his demise thanks to Ben in 2014 and had a funeral and everything! Well, Horton would comeback, as it turned out that even though he was strangled, Susan Banks was able to revive him, along with some assistance from Dr. Rolf (of course). Turns out, an empty coffin was buried the day of Will’s “funeral” and Horton returned in full force that year!

Dr. Rolf seems to have had his hand in most of these character revivals, which makes him quite the “doctor.” In 2018, Vivian would get shot by Kate, and while everyone thought she was dead, Rolf sneaked into the morgue and injected her with his infamous serum, giving fans hope that this wasn’t the last time Viv would see the light of day in Salem. She’d end up returning in 2019.

DOOL fans were heartbroken in 1990 when the ever-popular Steve “Patch” Johnson passed away. The only glimmer of hope around a return would be the fact that his coffin was taken away before it was officially buried. It would take 16 long years before Patch returned to the Salem scene, but seeing him (eventually) reunite with Kayla made it worth the wait!

Much like Steve, there was a small hint that E.J. potentially could return to Salem after he “passed away” in 2014. After being shot by his own bodyguard, Sami would say a tearful “goodbye” to her love in the morgue. Moments after, Kristen (as instructed by daddy dearest, Stefano) would inject something into E.J. body (most likely Rolf’s serum, right)? Teasers around E.J.’s return would pop up now and again within storylines, especially in 2017 during the time Will Horton was resurrected, and E.J. would officially return to the canvas in 2018 before leaving town with Sami once again. Will he ever come back to Salem?

In late 2018, DOOL fans were saddened when Nicole seemingly met her demise during a warehouse explosion, especially off the cusp of her and Eric officially reuniting after all of that time. Audiences were equally disappointed when she re-emerged on the scene in 2019, when they realized it was just Kristen DiMera parading around as Nicole (mask and all). There was a silver lining to the storyline that would be played out later that year: Nicole (and Holly) were both alive and well, living in Chicago.

There’s just something about the DiMera clan! No matter how many times they are down and out, they rise above any situation to come out on top. Back in 2015 when Kristen had stolen Brady and Teresa’s baby (Tate), a few Salemites headed to Italy in hopes to get the child returned. Kristen would pull out a gun, and get into a fight with Marlena. Thankfully, Marlena was able to throw Kristen out a window, where DiMera seemingly met her demise at the bottom of a bay – several stories down (she lived in a castle at the time). However, this didn’t stop Kristen from continuing to try and ruin Marlena’s life. She’d return to the Salem scene very much alive only a couple of years later.

They call Stefano The Phoenix, because of all the times he’s been able to “rise from the ashes;” however, perhaps he should be called a cat since this man clearly has nine lives! Played over the years by the legendary Joseph Mascolo, and more recently, Stephen Nichols (Steve Johnson), one has to wonder if DiMera will ever pass on? He’s literally met his demise several times, only to turn up very much alive! Regardless of his evil ways, the iconic character is certainly one that fans love to hate, and he always makes things interesting whenever he pops back to life in Salem.