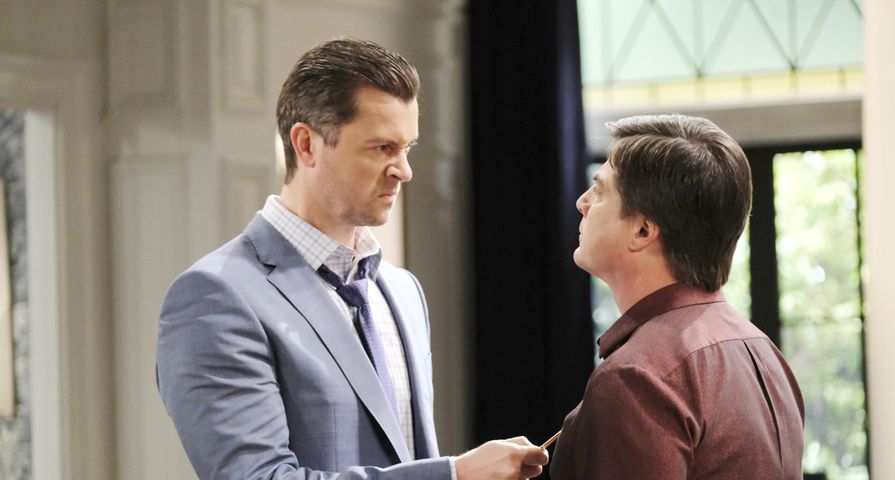 When it was announced that EJ DiMera would be coming back to Salem with a new face, Days Of Our Lives (DOOL) fans couldn’t wait to see the character’s return. The previous incarnation of the fan-favorite, played by James Scott, was revered for his unpredictable mix of menace and humor. Considering Scott’s fan appeal, plus the character’s seven-year absence, it’s clear that Dan Feuerriegel has his work cut out for him.

On paper, Feuerriegel meets the EJ DiMera qualifications to a tee: he’s an imposing figure with a handsome face. Dan also seems at ease with EJ’s mannerisms, which are basically an Americanized archetype of British sophistication, so no problems there, either!

Beyond the physical characteristics, Feuerriegel has the smugness down pat and the brooding look mastered. Sure, he’s been on the stiff side of stoic, but it doesn’t help that EJ’s return has mostly demanded a cold, calculating CEO so far, and nothing more. That might work at DiMera Enterprises, but DOOL writers have given him the same robotic dialogue in EJ’s rapport with family.

Want spoilers? Check out Days Of Our Lives Spoilers For The Week (October 11, 2021)

Feuerriegel’s rigid body language might also be noticeable because his first few months on the job were not exactly a piece of cake.

Those insights might explain another aspect to Feuerriegel’s performance that viewers have taken issue with: the feeling that he’s trying to mimic Scott’s portrayal. I wouldn’t dock him any marks for this, as it’s a pretty standard approach during the first few months when a recast enters a role. Besides, it sounds like Feuerriegel’s feeling much more at home in Salem nowadays.

“I’m having a bit more fun, making EJ a little more cheeky,” EJ shared, drawing a clear line between his current performances and “the stern, kind of grumpy dude” he portrayed at the start. But Feuerriegel is also beginning to change EJ’s clean-cut looks, something that viewers seem to be on board with so far.

“How I am now, with the stubble, that’s how my character looks on the show now,” Feuerriegel said. “At the moment, I think, he doesn’t have a beard. Or, he’s slowly getting stubble.”

Some scruff and a new haircut might shake EJ loose of the James Scott model, but how far will he go? Feuerriegel recalls a DOOL producer suggesting that he get back into his Spartacus shape, and shudders. “I was like, ‘Oh, man. Oh, no.’ Because he wants me, in some scenes, he probably wants me to get shirtless and be all manly. I’m like, ‘Dude, it takes so long to get to that shape.’”

Now that we’re aware of Feuerriegel’s challenges when he entered the NBC soap, perhaps the reason that EJ hasn’t had many jovial or romantic interactions is because DOOL head-writer Ron Carlivati was giving the actor more time to find his footing. Now that he has a new romance on the horizon with Nicole Walker (Arianne Zucker) and a more complex relationship with his son, Johnny (Carson Boatman), we can expect Feuerriegel to assign new attributes to this beloved character.

Want plotline predictions? Check out Days Of Our Lives Plotline Predictions For The Next Two Weeks (October 4 – 15, 2021)

Let’s all remember that Scott’s portrayal was pretty diminished near the end of his run, after Sami caught wind of EJ’s affair with Abigail. Luckily, the writers haven’t saddled new EJ with that baggage, and have instead given the DiMera a healthy shot of testosterone.

After all, at the end of the day, DOOL viewers don’t want EJ nearly as much as they want evil EJ back in Salem. Feuerriegel’s best weapon so far has been his sinister vibes, so I’m hoping we see more flashes of that intimidation.

Feuerriegel seems to be working out, not only because he walks and talks enough like EJ, but because James Scott has made it clear that he will not be returning to daytime drama. As he expressed last fall in response to a fan’s query, “please know that I will never. Never. Never. Never. Never. Go back to Hollywood let alone DOOL. There is nothing interesting there for me”.

Since there’s no use pining over past EJ’s, let’s root for the new guy. Feuerriegel has been a little cautious out of the gate, but it sounds like he’s just getting started with the role.