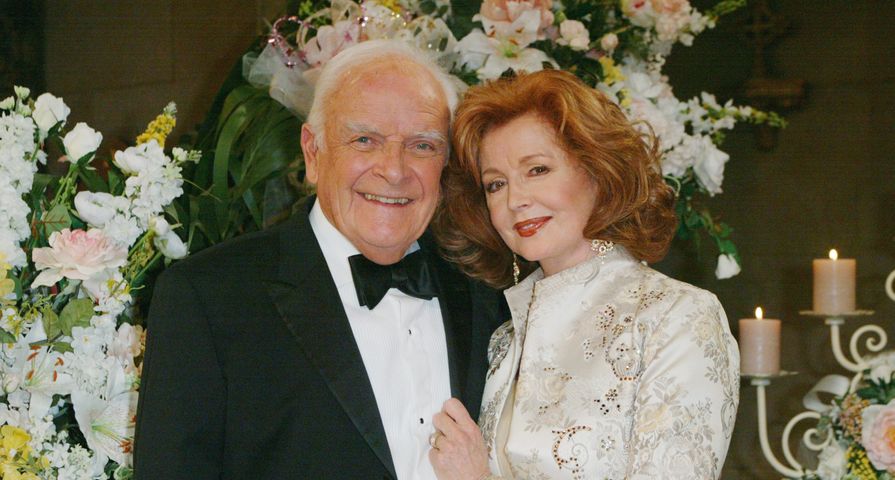 While Days of Our Lives (DOOL) is known for its over-the-top and unbelievable storylines, spy adventures, and DiMera drama, it is also known for its super couples. From “Patch” and Kayla to Tom and Alice, Bope, Jarlena and everyone in between, below is an overview of DOOL’s most iconic couples.

Who else ugly cried during the episodes that explained Adrienne’s passing? The romance between these two was a classic “rich boy falls for the girl from the wrong side of town” love story. Over the years, they would be on-again/off-again, but most fans knew that whenever they broke up, it was only a matter of time before they came back together. Here’s hoping Adrienne can return at some point, as so many DOOL characters have come back to life before her!

These two are a classic case of how life can imitate art, as the actors Susan Seaforth and Bill Hayes are together and have been happily married for decades now. The first real super couple of daytime drama fell in love in the mid-70s continue to go strong, even after all these years, and prove how true love can last the ages.

They started off as mortal enemies, but somehow along the way fell in love, and became one of DOOL’s most iconic super couples. Their hate-on for each other during their younger years seemed to fuel the spark, which would eventually turn into romance, and an ever-lasting love. Thankfully it seems they have outgrown their immature ways, and if this is the case, E.J. and Sami could share the rest of their lives together in bliss (with maybe a bit of drama on the side). Sami is stubborn, and E.J is a DiMera after all!

Truly a love story that DOOL fans continue to be obsessed with, Kayla and Steve embody the “good girl falls for bad boy” love story recipe that dominated Salem in the 1980s and 1990s. They have had plenty of ups and downs, and regardless of how low their relationship gets, they always manage to reunite and become stronger than ever. Plus, those steamy love scenes between them still have Days viewers swooning and wanting more.

Maybe Kayla learned a little about love from her parents Caroline and Shawn? While both have long passed away, their romance continues to inspire their children and is discussed within DOOL storylines to this day. Their love and commitment were simple yet beautiful, and they raised four strong and morally-sound individuals who continue to be heroes in the land of Salem.

Speaking of, while Bo may not have been Shawn’s biological son, he was his child in every other sense of the word. Bo may have been a tad wild in his younger years, but ended up being a good man when all was said and done. During a time when he thought Hope had passed away, he engaged in quite the romance with Billie Reed. So much so that when Hope was revealed to be alive, fans were torn on whether they were Team Bope or Team Billie.

Before Jarlena ruled the roost, Marlena and Roman were wrapped up in a pretty intense romance in the 1980s. They were a bona fide super couple on all accounts, with a ton of chemistry and true love between them. So much so that Marlena raised Roman’s daughter Carrie while she thought he had passed on, and Roman carried quite the torch for Marlena for many years after their romance fizzled. Recasts of the character could have been this couple’s downfall, not to mention a man named John Black, but fans still love to reminisce about this iconic couple’s love story from time to time.

While Maggie has shared quite the love story with Victor, many fans could argue that the true love of her life has always been Mickey. They shared a romance that spanned over three decades, and despite their many ups and downs, they always managed to support each other, and simply “be there” for one another.

Affectionately known as “Chabby” to DOOL Internet fans everywhere, they are a relatively newer super couple to this list, but iconic nonetheless. Days cannot survive on romances of the past, and when the love story with these two began to unfold in the 2000s, fans were hooked. They have had a rollercoaster of a relationship, but also have learned their lessons from past mistakes, and continue to make life in Salem very interesting!

During the late ‘80s and early ‘90s, DOOL’s storylines centered around the Brady family, the adventures of the four siblings, and their love lives! Roman and Marlena, Bo and Hope, Kayla and Steve, as well as Kimberly and Shane! Brothers, sisters, and spouses were all tight, and all loved nothing more than to hop on some spy missions, and bring Stefano down! While fans don’t get to see that much of Kim and Shane these days, many still fondly remember their trials, tribulations, and love scenes!

What made Bo and Hope work so well in the land of soaps and romance? She was a “well-to-do” Horton, destined to be with someone proper while he was a wild-child, motorcycle-loving, bad boy, with a heart of gold. Plus, it didn’t hurt that they were both uber stubborn (which added to their chemistry), and good looking to boot. Raise your hand if you miss this super couple in the land of Salem!?

One super couple fans don’t “have to” miss is J&J, and it’s been wonderful to see their official reunion play out on daytime screens. Their banter, their flirting, their slight comedic relief (at times) is not only endearing, but has been highly entertaining over the years, and it is nice to have some of that J&J magic back in Salem, today.

John and Marlena have, and continue to, defeat the odds when it comes to romance and relationship. Sure, they are both grandparents – great grandparents at that – but, there is something about their love and chemistry that continues to wow DOOL fans to this very day. A romance that surpasses decades, nothing truly beats the iconic pairing of Jarlena!

You can’t get any more iconic than Tom and Alice Horton, and despite the fact that the couple has passed on for many years now, their love is continually mentioned within episodes and storylines due to the legacy of not only the characters and their romance, but also the actors who played them.