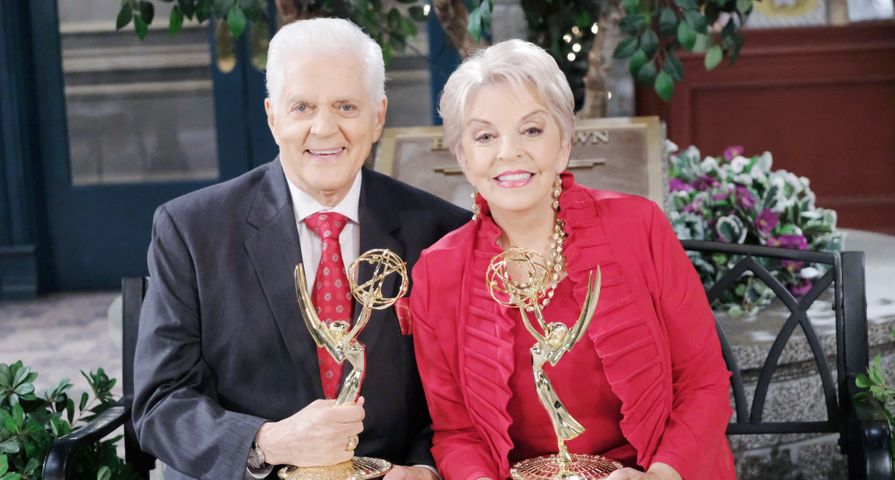 Long before General Hospital’s Luke and Laura Spencer shattered daytime television ratings with their wedding episode in November of 1981, Doug and Julie Williams were paving the way for soap opera couples. As the original super couple of daytime, they hit the cover to Time Magazine in the January 1976 edition, becoming the first and only daytime drama stars to achieve this goal. So, while we all adore our soap opera super couples, there would be no Bo and Hope, Patch and Kayla, or Luke and Laura for that matter, had there not been a Doug and Julie.

8. They May Have Never Met

As previously mentioned, Bill and Susan met on the set of DOOL in 1970. Susan had been on the show for about two years prior when Bill landed the role of Doug Williams, and if all stars and moons hadn’t aligned the way they did, this real-life couple may have never come to be. In the 2005 autobiography that the couple wrote together, Like Sands Through The Hourglass, Bill relayed that he was reluctant to work on a daytime drama because of the ‘bad acting’ stigma associated with them, and was pleasantly surprised once he started working for the show. Meanwhile, according to a WeLoveSoaps.net interview that was published in May 2010, Susan first auditioned for DOOL in 1965, and the character of Julie went through three actresses before Hayes was handed the role in 1968. Had they both not pursued the opportunities set forth by the soap opera, Doug and Julie would never have come to be.

Despite the fact that Bill started working on DOOL in February of 1970, these two lovebirds didn’t actually meet until months later in April of that year. This was because they were working on completely different storylines at the time of Bill’s debut and didn’t have much interaction together. Beloved Macdonald Carey, who played the legendary Tom Horton on the show, changed that right away by introducing the two. As Bill Hayes recalls in a May 2010 WeLoveSoaps.net interview, Carey began the introduction by saying, “This is our Susan Seaforth.” The rest as they say was history.

As previously mentioned, when Bill entered the land of Days, he and Susan were participating in two separate plots … that is until head writer William Bell saw something big between them. Bell saw a spark and the love story between Doug and Julie began. The spark has not slowed down one bit, with the two onscreen lovebirds celebrating almost 42 years of marriage! They got hitched in 1976 and real-life super couple Bill and Susan tied the knot in 1974 and they are now celebrating 44 years of marriage.

5. The Real-Life Wedding Was Low Key

Sixteen million DOOL viewers tuned into watch Doug and Julie get married. It was such a popular event that many fans had parties and gatherings to watch the grand episode. The wedding was beautiful, with Julie decked out in a gorgeous gown and four of her closest friends acting as bridesmaids by her side. However, when it came to their own wedding, Bill and Susan chose something more intimate. The two got married in front of a mere 16 of their closest friends in their living room at home.

4. Bill Was Married Before

The real-life soap opera couple are such a perfect match that it’s hard to believe that either of them were with anyone before they got married. Truth is, however, that Bill had a previous marriage that lasted over 20 years, and the couple ended up having five children together. Bill and Mary Hobbs were husband and wife from 1947 to 1969, with the marriage ending well before he met and fell in love with Susan.

3. The Role That Was Never Meant To Be

While Bill didn’t quite stray from his gig at DOOL (the Doug Williams character was on-and-off and a recurring role from time to time), Susan did spread her wings and explore other soap opera roles when she was not on contract with Days. She played Lauren Fenmore’s mom on the Young and the Restless (Y&R), and as such, spilled into the world of the Bold and the Beautiful (B&B), the Y&R’s sister show. Interestingly enough, the B&B‘s Stephanie Forrester role had originally been created with Susan Hayes in mind by former DOOL writer, William Bell. While Hayes turned it down, her costar at the time Susan Flannery picked it up and had an incredible run with the B&B part.

2. Their Great-Granddaughters Were On Days

In a 2014 holiday episode, the couple’s great-granddaughters Annabelle, Uma, and Eden popped into Salem to help out their great-grandparents on set. The three little sweethearts made a guest appearance during DOOL’s annual Christmas Story segment, where they played hospital patients, listening to the re-telling of the original Christmas story. Will these three cuties carry on the Hayes’ tradition of acting? They definitely look like star material!

The couple has shared many incredible scenes over the forty years their on-screen characters have been together. Might be hard for them to narrow down their favorites, but during a November 2015 interview with TVInsider.com the couple did just that by revealing three. They listed when Bill sang the song “The Look of Love to Julie” in 1970 as one, then in 1976 when the couple danced in a dream sequence to The Most Beautiful Girl in the World, and the last of their favorites was, of course, the 1976 wedding Doug and Julie shared.