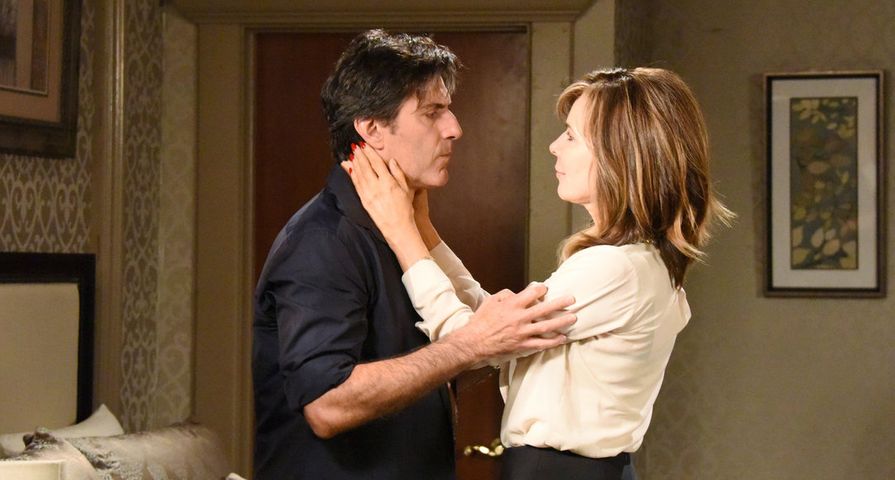 Days Of Our Lives' 7 Most Shocking Character Transformations

Days of Our Lives (DOOL) is famous for its super couples. Patch and Kayla, John and Marlena, Bo and Hope … the list can go on and on. In Salem, love always seems to be in the air, regardless of whether or not a little bit of drama is mixed in there too. While there are a ton of DOOL couples that fans would love to see reunite, there are also a handful out there that have broken up and should stay that way! As such, below is a list of seven DOOL couples who should never (ever, ever) get back together!

When these two lovebirds were younger, they had quite a thing going on. It seems that this romance has rekindled a bit as of late, despite the fact that Chad’s long-lost (well, not that long) wife, Abigail has re-entered the picture. Regardless, Chad and Gabi continue to be drawn together in various situations, despite Chad’s re-commitment to Abby. Should these two think about get back together? Not if Chabby fans have their say …

These two had quite the love affair from about 2009 to 2012. In fact, it seemed that Rafe was the fresh-face Sami needed to get over her troubling past and failed relationships with E.J. DiMera and Lucas Horton (just to name a few). Sami did cheat on Rafe and in many ways her scheming and manipulation placed a wedge in the relationship. Rafe has since moved on from Sami and seems quite cozy with Hope Brady, Sami’s aunt. While Sami is out of the Salem picture (for now), if she returned looking to spark up a romance, she should steer clear of Rafe. After all, she hurt the handsome cop so much during their time together and he deserves some happiness with Hope.

In their younger years, these two made quite the super couple. They were married at one point in time and Brady was incredibly smitten with the singer. While the marriage ended due to Brady’s addiction, the two haven’t really been able to re-connect after their 2008 divorce. Chloe has always struggled with poor decisions and manipulation while Brady has become a hero in Salem (of sorts) and tends to always do the right thing. Mix this with the fact that Chloe has essentially taken his friend Nicole Walker’s baby girl away from her, a child she has long for since forever, and there is a huge rift between these former lovers. Do any DOOL fans think Nicole and Brady should get back together?

Speaking of Chloe, she’s had love affairs with a couple of Salem’s leading men, one of those being Philip. She adored him when they were teenagers, but again, Chloe’s been known for making bad decisions and in a lot of ways, she’s used Philip over the years. For one reason or another, he’s also allowed himself to be used. She falsely accused him of rape at one point, had a friends with benefits relationship with him, and even recently asked him to lie about the paternity of the baby she was carrying. While these two have always seemed drawn to each other, they need to steer clear of one another – too much drama ensues when they are together.

Can one really say that Austin and Sami were ever a couple? Sami was obsessed with Austin in late ‘90s and as such, convinced him to marry her, not once, but twice. The first marriage was a mere technicality and a plot to get their son Will back, but the second time Austin proposed on his own accord. Sami lied, manipulated, and schemed her way into Austin’s heart. Thankfully, Austin saw the true Sami for all she was and dumped her. Meanwhile, good old Sami has moved on too.

These two started off quite lovey-dovey when Deimos strolled into town in early 2016, but things turned sour fast when Nicole Walker caught his eye. Then there was that time in the summer when Kate (accidentally) killed Deimos in a fit of jealous rage, only to realize he was alive? No rekindling that romance and it is better that these two stay exes in the long run.

Nicole has evolved since her gold-digger days, but there was a time when all she cared about was money. No one was wealthier in Salem than the infamous Victor Kiriakis and a creepy relationship was born. The two even got hitched at one point, with Nicole scheming to kill Victor to become a wealthy widow. Sadly, there was no love in this relationship at all and Victor soon came to realize this. Thankfully, he has moved on to a nicer better half in Maggie Horton. Nicole has also moved on, turning her back on her scheming ways and is now trying to live a good and decent life in Salem.