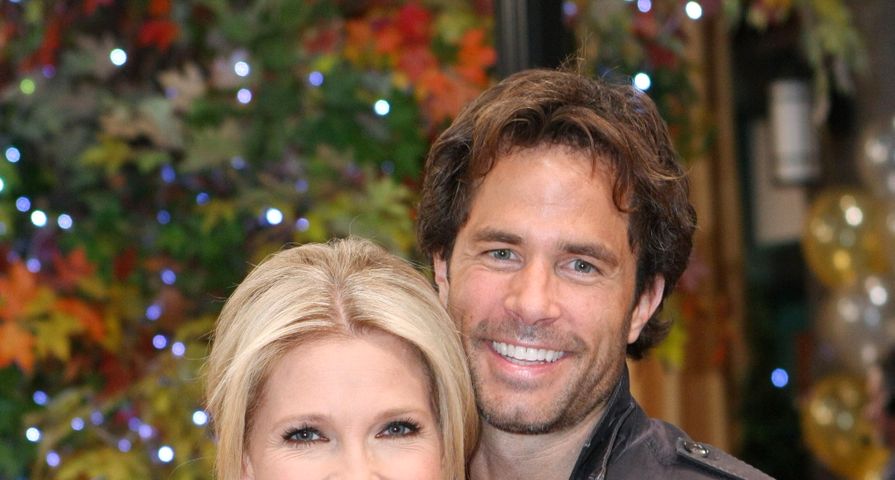 Love can be a tricky thing in the land of soap operas. Not only do characters have to battle some drama when it comes to romance, but also others trying to break them up, love triangles, and affairs. Days of Our Lives (DOOL) is known for creating some incredible super couples over the years; however, as great as some relationships are, sometimes they don’t always work out. Below is a list of 12 great DOOL couples who should have made it, but didn’t.

These two had super couple written all over them. Rafe and Carrie flirted with a relationship for a while back in 2011, but never really ‘made it’ at the end of the day. They were in-laws that also worked together, with Rafe married to Carrie’s sister Sami and Carrie hitched to Austin. While two teased the idea of coupledom, especially after they both found out that they were cheated on by their spouses, Carrie decided to stay with Austin (she thought she was pregnant at the time), and moved out of town to get Rafe off her mind.

Victor and Kate made quite the power couple during their relationship. Kate almost seemed to make the perfect match for Victor thanks to her business savvy and strong will. While Vivian Alamain did various things to break these two up, Victor and Kate didn’t make it the long haul due to Kate’s constant manipulations and lies.

After Victor kicked Kate to the curb, she jumped into a great relationship with Roman Brady. The two made a lovely Salem super couple; however, much like the other relationships Kate has gone through in the past, her lies and manipulation cost her when it came to Roman. In the end, Roman left Kate and has never really looked back.

These two have a crazy history together. From their dysfunctional relationship in high school to a one-night stand where they thought Philip was the father of Chloe’s son (for a long while), to more recently becoming close during Chloe’s surrogate pregnancy (carrying Daniel and Nicole’s baby), these two friends are always there for each and dabbling in romance, but never have been able to make it the long haul. What’s the deal? These two really should have made it as a couple, but in the end, they never did.

How cute were Brady and Chloe in their younger years? The two had a great love story, but Black’s addictions got the better of this relationship as time wore on. What’s even more interesting is that despite the incredible romance they shared, they’ve never tried to give their love another chance over the years. That could be because both have had their hands full with other romances in Salem. Maybe someday they can make it work again.

Rafe and Sami made a great super couple back in the day; however, her one-night stand with E.J. while the two were married tore this couple apart to the point of no repair. They didn’t make it in the long run, but do they still have a chance? Their own one-night stand back in October 2017 rocked Salem and ruined Rafe’s relationship with Hope. With Sami set to return to DOOL later this summer, could a baby be on the horizon for these two? Only time will tell!

Back in the early 1980s, there was no super couple stronger than Marlena and Roman. They had tremendous chemistry and built a beautiful little family together with children Carrie, Sami, and Eric. Sadly, the real reason that these two never made it was Stefano DiMera. Had he not switched Roman with John Black, Marlena would not have ended up falling for a fake Roman, while the real one was presumed dead.

Jennifer and Daniel made an interesting couple for a few years and certainly had their struggles. Dealing with the acceptance of Jennifer’s son J.J., and others constantly trying to break them up, this couple’s relationship felt like a roller coaster ride. In the end, their downfall was Jennifer not fully trusting Daniel, and this was something Jonas could not ignore or get over. The two went their separate ways but were still able to remain friends until Daniel’s unexpected death in January 2016.

Speaking of Jennifer, she had a sweet little romance in the early 1980s with Frankie Brady. The two were all lovey-dovey until Frankie cheated on her. In fact, Brady would end up leaving town because of the entire situation. When Frankie left Salem, Jenn moved on to Jack Deveraux, and the rest, as they say, is history.

Lucas and Sami were constantly drawn to each other in their early years, with a love-hate relationship where they had chemistry together, but couldn’t stand each other at the same time. That eventually turned into a healthy and loving relationship as the years wore on; however, once E.J. DiMera entered the Salem spectrum, all bets were off between these two. Lucas and Sami probably would’ve made it, but thanks to DiMera’s constant interference, they did not. At least they are able to co-parent effectively and maintain a solid friendship.

Wonder what would happen if Melanie Jonas strolled back into town? With Brady preoccupied with both Theresa and Eve right now, could Melanie help him forget about the Donovan sisters for good? Most likely. Melanie and Brady had incredible chemistry and the only reason these two did not work out was because she bowed out of their relationship when she realized he and Theresa had a son together. Theresa ended up leaving Brady about a year later or so later, so if Melanie returned and re-connected with Brady, would she be so noble this time around? Probably not.

Spoiler alert! Nicole Walker is set to return to the land of Salem in the next coming months, and one can’t help but wonder if this could mean that she and Eric will finally have their happily ever after. These two have had a roller coaster of a relationship over the years, with so many obstacles keeping them apart. The latest one was Brady blackmailing Nicole to leave town before she and Eric could reunite. If she returns, is an Eric/Nicole reunion on the horizon? Only time will tell.