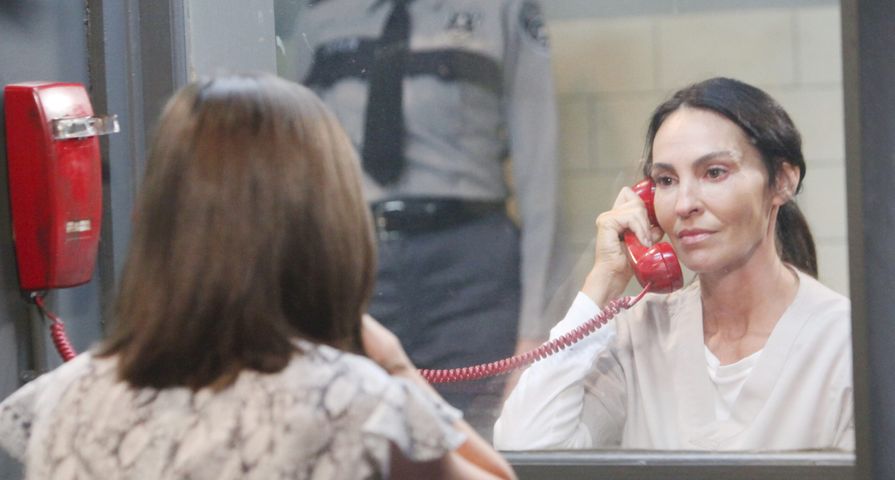 As General Hospital (GH) fans bid adieu to July and welcome in August, they can expect some massive drama on the horizon in the land of Port Charles. Valentin and Anna will move forward with their romance, while a major character return is nearing. Also, there’s a good chance Sonny regains his memories. Learn about these storylines and others in the below GH spoilers for August 2021.

12. Anna and Valentin Heat Up

Actress Finola Hughes recently appeared on Live with Kelly and Ryan. During the interview, she revealed that things would “heat up” between her character and the “guy” who used to be a part of the WSB. Sounds like she means Valentin! The two have already kissed in July, so will fans see more come August? It’s highly likely!

GH spoilers suggest some conflict between Terry and Britt as they embark on their co-Chief of Staff roles in August. Britt feels as if this is a demotion, while Terry believes there is more to Westbourne than meets the eye. At some point this month, added teasers state that Terry will swallow her pride to try to make things work. It’s going to be a shaky start, but does anyone else see a beautiful friendship on the horizon between these ladies?

GH spoilers are teasing that Sonny could regain his memory any day now. Actor Maurice Benard recently revealed during an interview that once Corinthos remembers, he’ll explode at anyone who’s betrayed him. Does this include Nina? Added teasers imply that she’ll pay a high price for keeping secrets, so she may feel Sonny’s wrath. But could Sonny’s bad reaction also apply to seeing Carly and Jason “together”? That could be considered a major betrayal if no explanation is provided.

Regardless of what happens, GH spoilers state that Nina will feel guilty in early August. After all, she knows the entire truth about “Mike”, and while she’s developed a relationship with him, it is a romance plagued by secrets. Will Sonny be the one to find out about Nina’s lies, or will she finally gain the courage to tell him the truth?

GH spoilers note that Jason will be “torn” between love and duty this coming month. His mob duties are telling him to marry Carly, and help protect the Corinthos mob family; however, he is quite drawn to Britt Westbourne. Jason has always put Carly (and Sonny) first, plus his work in the mob world. Will he decide to push this all aside in the name of love?

GH spoilers for early August indicate that exes and co-parents Jax and Carly will continue to face off against each other. They won’t be on the same page, and added teasers imply that Jax will believe that his ex-wife is continually placing their daughter’s life at risk. He won’t think Josslyn is “safe” with Carly. Is Jax right?

Across town, GH spoilers hint that Monica will get a second chance with someone she loves. She and Drew Cain were quite close, especially right before the character “passed away”. Monica almost had the strongest bond with Drew, out of her three boys, because the two just “clicked”. Could Cain be returning to town?

Actor and soap vet Cameron Mathison is joining the land of Port Charles come August. His role has been a bit hush-hush; however, a recent Instagram post has viewers wondering if he’s been recast as Drew Cain. If so, Cain would be Monica’s “second chance” with a loved one.

GH spoilers for early August suggest that Jordan could decide to fight for her marriage. The woman has impeccable timing, especially since Curtis and Portia have grown close. Added teasers imply that Jordan will ask Curtis if he wants to work things out after all. What will his response be?

GH spoilers indicate that Harmony will re-enter the show’s storylines in early August. In fact, she’ll befriend Alexis in jail. Sounds like Ryan won’t be the only familiar face that Davis runs into during her stint at this new, spa-like jail. In added teasers, Alexis will wonder if Harmony has ulterior motives.

As Chase works harder than he’s ever worked in his life to get back to his “old self” through rehab, Willow will struggle with the web of lies she’s woven. Michael will be there to comfort her, but how long before these two get caught? Plus, it doesn’t sound as though Chase is anywhere near full recovery but he will get some motivation and stern warnings from Dr. Austin.

Actress Kirsten Storms is currently on medical leave due to brain surgery, which is why Maxie Jones left town with Georgie and James. The good news is that she’s healing very well, but as per Soap Opera Digest, it doesn’t sound like the actress will be back in the land of Port Charles in the foreseeable future. There is currently no airdate to Maxie’s possible return. It’s better that Storms takes her time and recovers, instead of rushing back to work. While fans miss Jones, Kirsten’s health takes top priority.