Days Of Our Lives’ 10 Greatest Moments Of All Time 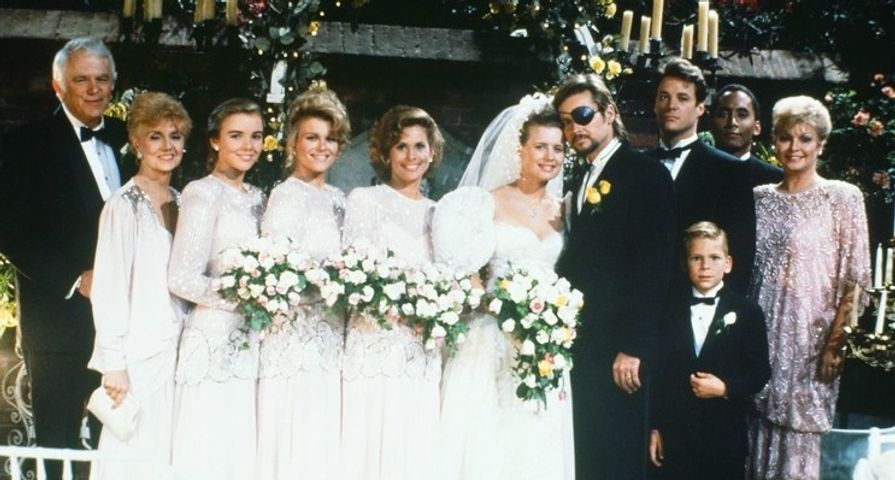 Since Days of Our Lives first premiered on November 8, 1965, the show has had its fair share of drama. From serial killers to people buried alive to demonic possessions, the soap knows how to keep fans hooked. In honor of the Days’ 52nd anniversary, we are counting down the soap’s 10 greatest moments:

Long-time fans will remember November 8th, 1965 as that fateful day when the soap first began. The very first scene profiled a character that still appears on DOOL today, a teenaged Julie Olson (now Williams) trying to steal a coat from a shop. One cannot even begin a list like this without starting from the very beginning and remembering a young Julie, who now holds a very iconic role as one of the longest reigning daytime drama characters today that still appears within DOOL storylines.

Not one single moment, but a collage of many. Who else looks forward to celebrating the holidays every year with Salem residents? Every Christmas Eve, one of the town’s largest and most loved families gather to decorate the Christmas tree at the Horton residence. Each family member – whether by blood, marriage, or adoption – has an ornament donned with their name that is placed on the tree. DOOL sometimes provides flashbacks for these warm and fuzzy episodes each year, with wonderful memories of holidays’ past. Here’s hoping fans get to see yet another legendary holiday tree-trimming episode for 2017.

Sure, Stefano might still be alive, but when Hope shot him in January 2016, everyone pretty much thought he was gone for good. Joseph Mascolo announced his retirement prior to his last official episode and DOOL fans knew the end was near. Shooting DiMera signified the end of an incredible era on the show, as Stefano was the biggest villain the show had seen. In a lot of ways, Stefano was one of the greatest bad guys to grace daytime drama screens ever. Alas, when Mascolo passed away later in the year in early December, fans knew (or thought) that Stefano was gone for good. While our DOOL heroes and heroines currently search for DiMera in Prague, Mascolo’s final curtain will never be forgotten.

As the first official super couple of the daytime world, how could anyone forget the first time this duo said their ‘I dos’? The affair happened in 1976, with much splendor and about sixteen million DOOL fans watching. In an interesting tidbit, not only does the wedding hit this list as one of the greatest Days’ moments of all time, the individuals that play these iconic characters (Bill and Susan Hayes) listed the 1976 wedding as one of their favorite scenes ever in a TVInsider.com interview that took place in November 2015.

Sami Brady has to be one of the most popular DOOL characters of all time. A fan favorite, at one point in time she was a troubled teen that turned into a manipulative schemer. But what brought her to this terrible path of destruction? A moment in 1993 when Sami sees her mother Marlena cheating on her father with John Black. It was a pivotal scene that caused a downward spiral for Sami. While she might be considered a heroine today, the scene helped shape her into the woman she currently is. Not only did Sami develop bulimia shortly after, but she began a web of deceit that included stealing her baby sister and selling her on the black market, as well as trying to steal her sister’s boyfriend, Austin. The good news is that, as far down as she went, Sami evolved into a pretty strong (good) character when all was said and done.

It was the beginning of a love story that still exists today. In 1986, a young Kayla was smitten with bad boy Steve “Patch” Johnson, and as he was wounded, she proceeded to help clean him up. She began to remove the patch that hung over his eye, and even though he protested, Kayla was persistent. While audiences did not see what was behind that patch, they did see a love emerge between these two, when Kayla did not blink or show any disgust when she removed it. She accepted Patch just the way he is. It’s chemistry like this that keeps these two characters together (and fans glued to the screen when they are around) to this very day.

4. Vivian Gets A Taste Of Her Own Medicine

Who could forget that time when villainess Vivian Alamain buried long-time rival Carly Manning – alive – in a casket, six feet under the ground? Faking Manning’s death, Vivian also snuck a radio transmitter to taunt poor Carly as she lay there, waiting and helpless. Fast forward some years and good old Viv thought she could get away with the same plot twice. Crazy, right? Totally! Especially since karma bit Alamain in the butt and she ended up locked in the sarcophagus instead of the intended victim, Maggie Horton.

Source: Days Of Our Lives Wikia

In late 2015, Days’ fans witnessed the long-awaited return of their prodigal son, Bo Brady. Bo had mysteriously disappeared in 2012 and was written out of storylines. It seemed like one day he was there, and all of a sudden, he was gone without much explanation. Brady returned in November of 2015, with a very good reason as to why he had stiffed Fancy Face all these years. Not only did he save the love of his life from impending death, the two reunited and all was well with the world … for a bit. The good news is Bo’s return was glorious and provided closure to both the characters and DOOL fans. The bad news was the return was short-lived, with Bo dying from a brain tumor mere days after his return. Very bittersweet for DOOL audiences and all of Bo Brady’s biggest fans.

When Stefano DiMera strolled into Salem in 1982, he worked hard for many years to destroy the beloved Brady family. But why? Why did he hate them so much? Everything was explained in 2008 when it was revealed that the sister of the patriarch (Shawn) of the Brady clan had an affair with Stefano’s dad (Santo) that resulted in an illegitimate DiMera son. Back then, the audience was led to believe that John Black was said love child, but this all changed as the years progressed. It was a great moment when Auntie Colleen Brady explained the affair to the family and the reason why Stefano hated the Bradys. For the first time in a long time, a soap storyline actually made sense …

Many weddings have occurred on DOOL during the over 50 years that the show has been on the air, but none have been quite like the day Patch and his Sweetness said ‘I do.’ In fact, this moment not only hits this list at number one, but it also happens to be DOOL Executive Producer Ken Corday’s favorite as well. In a November 2015 TVInsider.com interview, Corday lists the 1988 wedding when Kayla could not speak, but eventually says ‘I love you’ to Steve as her first words (in a long time) during their ceremony as being an “incomparable” moment for him. It was a day to remember and one that most Days’ fans won’t soon forget.