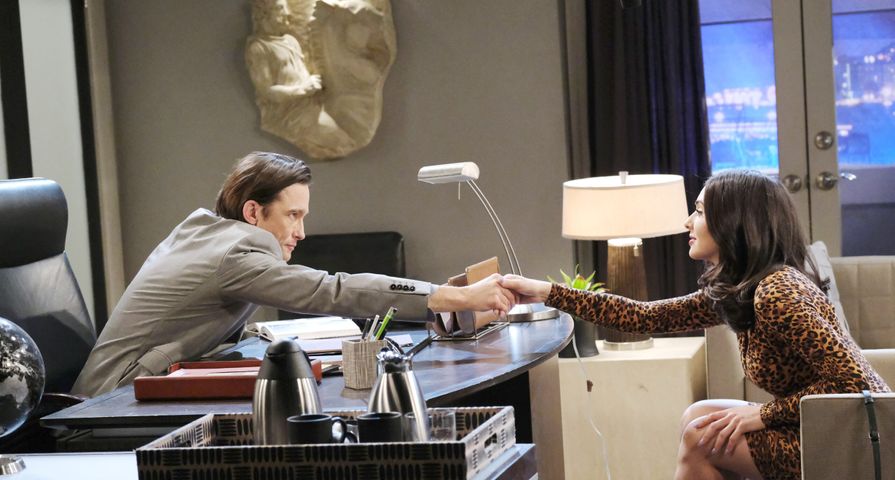 Calling all Days of Our Lives (DOOL) fans! What’s on tap for the coming week? Xander attacks Roman, while Kristen is ready to confess to Brady, and could Steve and Kayla be expecting? Learn about these storylines and others in the below DOOL spoilers for the week of March 29, 2021.

DOOL spoilers hint that Xander will drink a little too much early on in the week. He’ll still be reeling over Sarah leaving him at that altar, and who could blame him? Added teasers hint he’ll be so out of it, he’ll attack Roman. What could Roman say to trigger Xandy? Could he reveal that Sarah didn’t leave town with Rex? This could have Xander wondering what is really going on with Horton.

DOOL spoilers imply that Kristen might still be dealing with the “Sarah” situation next week. Added teasers suggest that she’ll be in a bit of a jam, and need some help. She’ll decide to turn to Vivian Alamain for some help. Could things go wrong as she tries to transport Sarah Horton to the island she had promised?

DOOL spoilers reveal that Brady will visit Kristen in Statesville. Added teasers for the week note that his girlfriend will be ready to confess. Will “Susan” let the cat out of the bag, or will these two women switch back by the time Brady visits Kristen in prison? Hard to say. There’s a good chance that being locked up has gotten to Banks. She may want to confess to Brady so that she and Kristen can switch back again.

Across town, DOOL spoilers offer some cryptic news. It seems as if super couple Kayla and Steve will be dealing with some stunning baby news. The entire thing will be unexpected, but is Kayla the one that is expecting? Seems hard to believe; however, this is the land of Salem where anything is possible. With that said, maybe this “unexpected” baby news is linked to one of their kids.

John and Sami have always had a unique relationship. There’s a lot of love there, but there is also a ton of resentment, especially where Sami is concerned. DOOL spoilers indicate that the two are set for a major confrontation next week. Does this have to do with Charlie Dale’s shooting?

Added Days teasers hint that the two might fight over Sami’s scheming. Regardless, tensions will run high, and things will “boil over” between John and her. Sounds like his short temper could play a role in their showdown. Brady recently confessed to Dale’s shooting, although she was not the one responsible. Could more information place John as a suspect?

Speaking of confrontation, DOOL spoilers suggest a major one near the weekend as Jan Spears returns on Friday, April 2nd. Actress Heather Lindell will reprise the role, and added teasers hint that she will “faceoff” against Shawn and Belle. Will things get ugly between these three, or has Jan returned to apologize? Being in a coma may have changed her outlook on life.

Seems as if the week of March 29th will provide more of the same between Ciara and Ben. While Weston will continue to be concerned over Ciara’s short-term memory loss, there is a glimmer of hope. Days spoilers state that Marlena might be able to help Ciara after all, so could hypnosis be on Ben’s mind?

Lastly, DOOL spoilers reveal a date night between Philip and Gabi in the coming days ahead. They’ll decide to talk business over some dinner, which might prove to be a major score for Hernandez. Added teasers imply that Kate and Jake will both take notice of the two on their “date”. If Jake seems upset, this could cause further conflict for Kake.