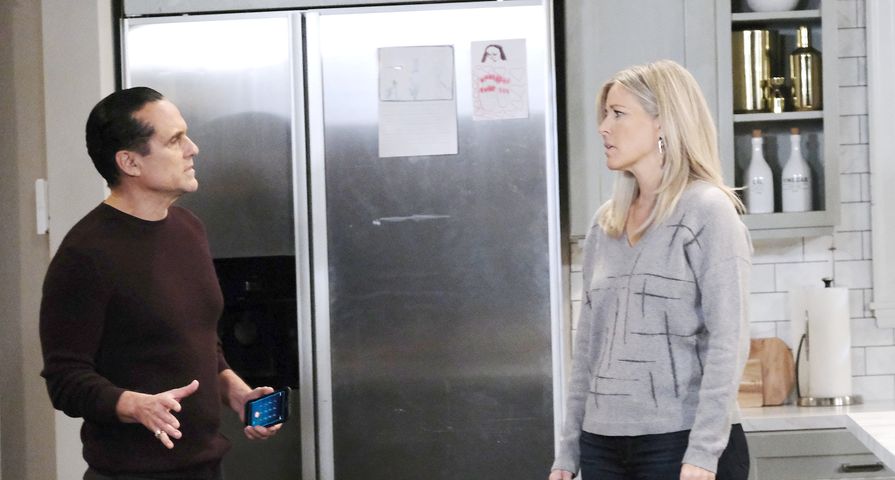 The first month of a brand-new year in Port Charles means General Hospital (GH) fans should gear up for some major drama! Will the Wiley paternity secret finally come to fruition? Will CarSon fair well up against all their issues? What will Nelle do upon her release from Pentonville? Hard to say, but easy to speculate about! Below are some GH plot predictions for January 2020.

12. Friz Crack, Thanks To Nikolas

GH spoilers imply that Nik’s return will cause some unexpected issues for Franco and Liz this coming January. Liz and Nik are long-time best friends, but also former lovers, so will this bring out the jealous side to Franco? Will there be romantic tension between Nik and Liz that Franco picks up on? Either way, expect the Friz super couple to crack a little under this pressure.

11. Anna and Finn Break Up Over Peter

GH spoilers hint a wedge is forming between Finn and Anna this month, and this will all be thanks to Peter. Some friction is one thing, but what if this super couple breaks up over the differing points of view when it comes to August? There is a very good possibility that this happens.

According to GH spoilers, it seems as if in the end, Jason and Anna may be the ones who eventually expose Peter for who he really is. With that said, could Anna also stumble upon some proof that August might not be her son? Could she finally find information that points to the idea that Peter is really Alex’s child?

Once Maxie finds out that Peter has been lying to her, she won’t be too pleased with him. She’ll obviously dump him and kick him out of their apartment. While it will be hard for her to deal with, she will; however, what if weeks later, she finds out that she is expecting Peter’s child? That would complicate the situation and fast.

GH spoilers indicate that the Quartermaine clan will have to work together in January to protect the family legacy. Could an outside force be after ELQ … perhaps, the Cassadines? Regardless, all will come together to battle this force, which may have fans seeing Tracy linger around Port Charles for a little longer, and Jason join his once estranged family, to help them.

GH spoilers tease that a crisis will hit Port Charles, as Laura takes on a leadership role to help save the little town. This teaser sounds a little like the Metro Court hostage situation that happened years back; something Jerry Jacks was at the helm of. What if GH fans are privy to a Jerry Jax return? His name has been mentioned here and there since Jasper Jacks has comeback. He could also be behind the Quartermaine’s threat.

Sonny is obsessed with helping his dad Mike, and for good reason: he wants to use his money and power to help relieve his father’s Alzheimer’s symptoms and keep him around for as long as possible. His heart is in the right place; however, what if he crosses the line? What if he pursues a medication or therapy for Mike that has yet to be approved by medical professionals, causing his dad’s symptom’s to worsen. What if Baby Donna is put at risk when Mike spirals out of control?

CarSon is cracking at the bits, with Carly in on the Nikolas secret, while she keeps it from her hubby. The lack of trust between them will continue to escalate in January, thanks to this, and along with all they are dealing with when it comes to Mike. Could all their issues cause Carly to turn to her ex-husband Jax for support? Furthermore, could this cause the two to re-ignite a romantic connection that was once there?

4. Nelle Is Released From Prison

GH spoilers hint that Nelle will get released from prison this January, and fans should brace themselves, as it seems that the Wiley secret will finally explode. Teasers also state that Nelle’s next move will affect Chase, Willow, Michael, Sasha, Carly, and others. She obviously has her sights set on Wiley, and if she tells everyone the truth about his paternity, does that mean that she plans on gaining custody of the little one, and taking him far away from Port Charles? Does she potentially kidnap the little boy? This is Nelle, so anything is possible!

GH spoilers indicate that Neil will get some unexpected news in January, which will ultimately affect his relationship with Alexis. Could this be a health issue he has to deal with? Perhaps he’ll get fired from General Hospital and need to find a new job out of town? If he were to move, would she move with him?

As per GH spoilers, Dustin and Lulu’s romance will hit a snag when a person from “someone’s” past comes back into the picture. Could Dante be making a Port Charles comeback? After all, his name has been mentioned quite a bit as of late. Then there’s also a possibility that Johnny Zacchara returns, or even Dillon Quartermaine (after all, his family may need him to help out with the threat they are facing). Any ex-boyfriend could cause tension between Lulu and Dustin at this point. There’s also a potential for someone from Dustin’s past to enter the picture, too.

1. Who Could Trina Be Linked To?

GH spoilers relay that Trina finds out about a mystery relative living in Port Charles. Who could Trina be linked to? Curtis and his family? Maybe she’s a long-lost Quartermaine, and her connection to the clan is where this “threat” against the family will linger from? There’s always a possibility that she’s also connected to the Cassadines in some form. Then there’s Ava. The two have gotten close since Trina started working at the gallery … could Trina and Ava be related in some fashion?