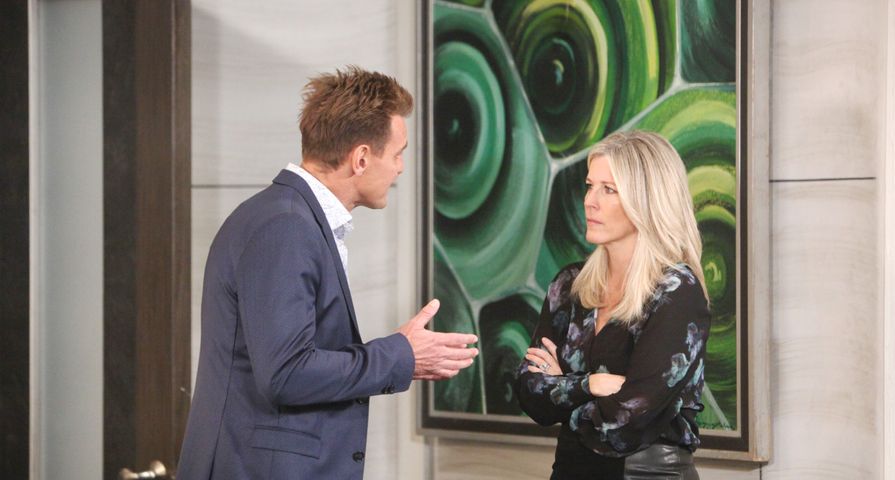 Calling all General Hospital (GH) fans! Who’s excited about February Sweeps? Should prove to be an interesting month in the land of Port Charles! Will Jason end up doing the unthinkable to Franco? Will the double wedding go off without a hitch? Will Peter ever get found out? Viewers just love to speculate! As such, below are some GH plotline predictions for February 2021.

Franco is spiraling right now, hearing voices, and becoming increasingly agitated. Thanks to Peter’s article, Baldwin also has a target on his back. As Elizabeth does all she can to help her hubby, Jason won’t revel in the idea of shooting Franco; however, he’ll have his eye on him. He made a promise to Franco that he’d protect Liz and her boys. Jason won’t want to pull the trigger, but will if he’s pushed.

There’s a dire situation on the horizon, as GH spoilers hint that there will be a shooting that could occur during the big event. In fact, Maxie and Chase are said to become “unintended” victims at the wedding when all is said and done. Could Jason hurt someone else, trying to aim for Franco? What if Baldwin “freaks out” during the wedding? Jason is a pretty good shot, and it seems unlikely that he aims and misses. With that said, someone else could try and shoot Baldwin. Plus, with so many people around, a power struggle and gun could equal out to a terrible situation.

11. Could Liesl Try And Stop The Wedding?

Sounds very extreme, but Liesl believes that Peter is public enemy number one. The last thing she wants is him anywhere near Maxie or her grandson. With Peter and Maxie getting married, he’d officially become little James’ stepdad. Could Obrecht do something over-the-top and try and shoot Peter before he says, “I do?” Could she miss and hit Maxie and Chase? They’d both be up at the altar during the ceremony.

Perhaps whoever shoots Maxie and Chase is after Peter. If Maxie gets shot, she could lose their baby girl. Whatever happens, Peter will know it is his fault. The truth is bound to come out at some point, especially with Anna hot on the trail. Plus, Jason and Britt are also in the know about August. Peter’s world will come crashing down on him, and losing his baby daughter, along with Maxie, will only amplify his remorse around the terrible deeds he’s tried to cover.

Whether Chase is Finn’s son or brother, he’ll lose his mind if Harrison is hurt or suffers from a medical emergency due to this shooting. With that said, Chase may need blood or a transplant of some sort, something linked to what only a bio dad can give. The truth about Chase’s paternity, as well as Finn and Jackie’s affair, will be exposed at the worst possible time.

Leading up to the double wedding, Willow may have second thoughts about her reunion with Chase. She may feel as if she misses Michael, or there could be a nagging feeling that she no longer “belongs” with Chase. When Chase gets shot, she’ll be forced to stay with him. She can’t leave a man when he’s down, and she’ll commit to stay with Harrison during his recovery, which could take a while depending on his condition.

7. Michael Not Feeling It

Michael will not feel right about his reunion with Sasha either. While he still cares for her, he’ll be thinking about Willow. Sasha will also have Brando on the mind, so these two might part ways amicably, and she may gravitate towards Corbin. He’ll stay away from Willow, as she’ll be preoccupied with Chase and his recovery.

6. Willow and Michael Cross A Line

Willow will need some support, and she’ll reach out to Michael after Chase’s accident. If Harrison is unconscious, with his life hanging on a limb, Willow could feel as if her world is falling apart. Could Michael and Willow get caught up in some emotions and have an affair while Chase is struggling in the hospital?

Over to Sam and Dante, they’ll continue to bond but won’t cross any lines. They’ll develop a friendship, and feel some chemistry between them, but because of everything going on, they’ll move very slowly. They may deny any feelings between them, even though sparks will be there. They’ll take their time when it comes to a relationship, as both of their hearts are still mending from what’s happened in the recent past.

These two are bound to hit the sheets sometime in February. As they’ll be navigating dangerous waters between Cyrus and Peter, organizing a plan, and placing it in motion. They’ll feel an adrenaline rush. Things will be both scary and exciting. They may find themselves overwhelmed with a situation and simply follow their emotions. They’ll keep their “romance” on the down-low due to Jason’s “business” and the dangers that surround him.

Carly and Jax aren’t out of the woods yet. Sure, Nina knows the truth about Nelle; however, she doesn’t know the entire story around Benson’s demise. She may want to learn more about her daughter, or fully confirm that Nelle is hers via a DNA test. If someone can find an old hair strand from a brush (or something of that nature), things may not get overly complicated, but what if they exhume her body? If the test states that Nelle isn’t Nina’s daughter, this could raise an eyebrow with both Reeves and Valentin if he’s helping her.

DNA tests that don’t match could also have Nina and others wondering if the body found in the woods was Nelle’s after all. Nina may decide to look further into the path that her baby took once Phyllis dropped her off in Florida. Sounds like Nina could pay Phyllis a visit at some point in February so she can confirm names with the nurse, or get more information. Could Sonny and Nina cross paths?

Sonny is sure to start having some flashbacks of his life in Port Charles. He won’t be able to piece things together, but it’ll have him taken aback, especially if he starts remembering mob things, or adventures in the past. Sonny is sure to struggle in February, and wonder who he is and what he was up to in his “former” life.