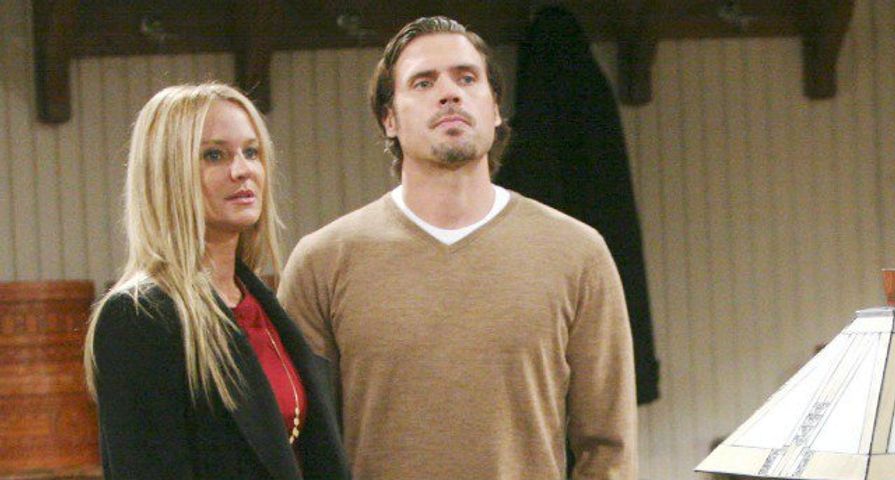 Great Y&R Couples Who Should Have Made It But Didn't

Love is always in the air on soap operas. Couples hook up, break up, only to make up again. Some lovebirds can make it through the long haul, while others are simply an epic fail. Genoa City is no exception when it comes to love stories that have gone right and wrong. Below is a list of seven Young and the Restless (Y&R) couples who hooked up (and broke up), but should never get back together.

These two have been through a lot over the years and while Victor has always been the love of Nikki’s life, she could always count on Jack. They are friends now, but have been through a lot in the past: two marriages, two miscarriages, and had a son that died shortly after birth in 1993. While they make amazing friends, they’ve always flopped in the love department, mainly because, well when push comes to shove, Nikki always chooses Victor over Jack.

Speaking of good old Jackie, another couple that should refrain from a reunion is Phyllis and Jack. Recently going their separate ways, Red (as Jack affectionately calls her) is simply no good for him. For about 17 years or so, this couple has been on-again/off-again and the beauty of these two is Jack has always adored Phyllis and accepted her for the scheming and manipulator she is. The biggest thing that seems to always come between these two? Phyllis’ inability to remain faithful to Jack while they are together. She cheated on him with Nick Newman in the early 2000s which ended their marriage at that point in time, and she more recently engaged in an affair with his brother Billy. Phyllis needs to stay as far away from Jack as possible.

Young And The Restless: Spoilers For August 2018

These two are currently living in Splitsville thanks to Hilary’s constant manipulations … but will that remain for long? Devon has always been under a spell when it comes to Hilary, but it seems like he’s finally seen the light. While they do have some pretty good chemistry together, as a couple they are toxic. It’s never a good sign when you start a relationship off by having an affair together. Hilary has also been far too unstable over the years. One minute she’s a decent human being, the next she’s plotting to trip poor Mariah on live television. The battle of good and evil does cross lines in every human being at some point, but when it comes to Hilary, she tends to sway towards good when she wants something from Devon. These two need to keep that breakup solid, and move on to other people.

Victor has always had a soft spot for Ashley Abbott. While she is the sister of his nemesis Jack Abbott, there’s always been an unspoken fondness that Newman has for her. The two were married twice and did make a pretty solid power couple in the land of Genoa City at one point in time. As much as Victor has fancied Ashley (now and again) over the years, his heart belongs to Nikki which has ultimately been the downfall for this relationship. Unless Nikki passes on at some point, these two should just steer clear of each other and keep their relationship only “business-friendly.”

These two do seem on the verge of hooking back up, but it will most likely be a terrible mistake if they do. Vicky and Billy have incredible chemistry together and their bantering back and forth is highly entertaining onscreen. They share a family and a lot of history. When things are going well in their relationship, everything is all sunshine and roses. But when they hit a small snag, everything falls apart. The couple’s biggest reason to not get back together? Billy’s terrible choices, keeping secrets, affairs…the list goes on and on.

Y&R Weekly Poll: Should Phyllis And Jack Get Back Together?

There are fans that would love to see Sharon and Nick hook back up again … and there are many that don’t. When they are together, these two light up daytime screens. They have tremendous history together with many good times. Sadly, they also have a history of hurting each other. Nick has always offered Sharon the stability she craves. He’s also saved her from many a sticky situation. He’s also cheated on her countless times. Sharon has not exactly been a saint either. She lied and kept two kids away from Nick. With all that has gone wrong with their romantic relationships in the past, maybe it is better that these two stick to co-parenting their kids instead of diving into coupledom again.

Young And The Restless: Crazy And Shocking Spoilers For Summer 2018

It was awkward, creepy, and horrifying. The union of Shictor did occur in 2012 and the two actually got hitched twice that year (both marriages were annulled quickly after). While Victor may be warming up to Sharon as of late, as the two have been mortal enemies for years, here’s hoping they can rekindle the father-daughter relationship they once shared. Seeing them as a couple again may just cause some Y&R fans to simply stop watching the show. The coupling was just terrible (and gross) to watch.