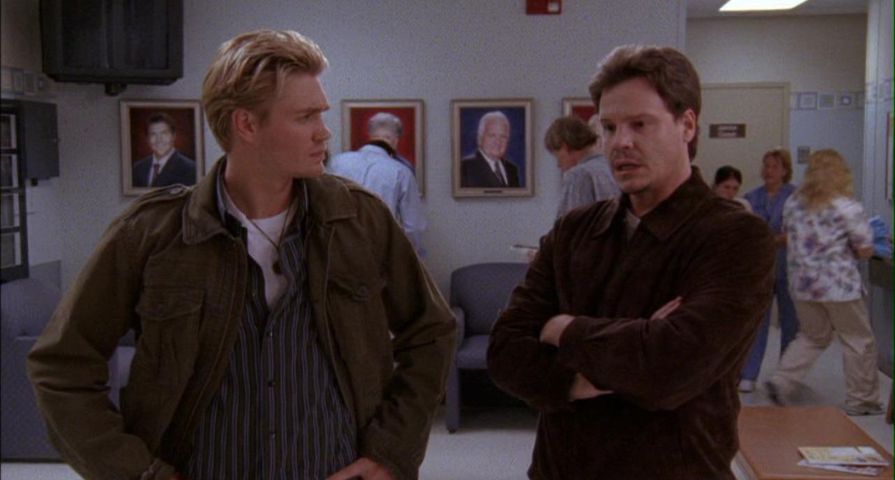 One Tree Hill was a great show, and had everything needed to be a success in the saturated teen drama market. With excellent writing, an amazing cast and a great musical influence, One Tree Hill was an awesome show through all nine seasons, but as with all shows, some plots and storylines got a little weird. The show admittedly has a soap opera type feel as many dramas do, but sometimes this influence took over too much and left fans scratching their heads at some of the most ridiculous moments. Not to say the storylines still weren’t entertaining or done very well, they just stretched a little too far from what the show normally portrayed. Supernatural encounters, so many kidnapping and just really, really bad luck were only the tip of the iceberg when One Tree Hill took the step into ridiculous.

11. Lindsey Leaves Luke At The Altar

The entire relationship between Lucas and Lindsey never felt right, probably because it took us all by surprise as when they left off in season 4, Lucas and Peyton were a happy couple. As they continued to plan their wedding and it was obvious there was still something between Peyton and Lucas, everyone wondered  just how and why Lindsey and Lucas would call it quits, but they way in which it happened was completely ridiculous. As his editor as well as his fiancee, Lindsey read Lucas’s novel, plainly titled The Comet before the wedding, but it wasn’t until standing at the altar and after Lucas had already said “I do” did she realize the comet in the book was actually a reference to Peyton’s car, a Comet. It was definitely a “they’re kidding, right?” moment when that was the way in which they split up Lucas and Lindsey. What was even more absurd was that Lucas actually seemed to love Lindsey and had no idea what she was talking about.

There are quite a few “psychos” who make their way to Tree Hill and unfortunately always get themselves involved in the same group and the one leading the way was Pyscho Derek in season 4. At first “Derek” is seemingly Peyton’s half-brother, but before long it is revealed he is actually a stalker of Peyton’s who learned about her life from her blog and podcasts and also believes she resembles his dead ex-girlfriend. While unfortunately, these things do happen, what was most ridiculous was that even though Lucas pushed him out of a window, he somehow managed to get up and get away before anyone could get to him, leaving the door wide open for his return.

While the life trajectories of the core group of characters made the show what it was, the more you think about it, the more ridiculous it all seems. Not many people actually know a celebrity let alone a whole group of them and that’s why it is absoultley incredible and yes ridiculous that five friends from Tree Hill, North Carolina became an author, record label owner, NBA player, recording artist and a billionaire businesswoman. Sure, it was really unbelievable, but somehow the writing and the characters kept the whole thing realistic and it really didn’t seem that outlandish when we were all avidly watching.

Dan Scott went through a rollercoaster of situations throughout the series and somehow always came out on top. Dan has been a part of a few questionable plots, however in the Season 6 episode “Searching for a Former Clarity,” it didn’t take any longer than the opening credits for something incredibly odd and tragically funny to happen. Dan who had been waiting for a long time and suffered a lot before finally being called up to receive a new heart was thwarted by…a dog. In the episode the medic is running in with the live organ cooler, but is tripped up by a stoned guy’s dog in the waiting room dumping the cooler and the heart out on to the waiting room floor. To make things worse the dog grabs the heart and runs away with it right in front of Dan and Lucas, who then have a intense stare off.

Like many other slightly weird storylines in the show, this one didn’t seem so ridiculous when watching the first time, but when watched again definitely seems odd. We watched Brooke as the fun, party-girl and although her character arc included a lot of development into a level-headed and responsible woman, it was taken a little too far in season five. Although the season came back, skipping four years of college, it seemed they matured the characters way past the 22 years old they were supposed to portray. While Brooke had a lot of money and a stable house, her wanting to adopt seemed more than a little silly and got even more ridiculous when she took in the troubled teenager, Sam. Brooke was a good role model, influence and support system for Sam, but fans could not get past that Brooke was barely out of her teenage years herself and was in no way ready to be a “parent” to a 15-year-old.

The musical influence in One Tree Hill is prominent throughout the entire series, which is extremely obvious and also made for great episodes with performances by the likes of Sheryl Crow, Gavin DeGraw, Jack’s Mannequin and of course, Fall Out Boy. It was already sort of unbelievable that at only 17 Peyton could not only run an all ages club but also book such big names, but it was just outrageous that she would actually end up dating Fall Out Boy bassist Pete Wentz. Had he just been playing a musician, it would have made more sense but he played himself and there is no way an internationally famous rock star would fall for a teenager from Tree Hill. Not only that but he took time out of his very busy schedule to show up for the group’s weekend getaway to Rachel’s cottage, which would never, ever happen; however, in the end the whole relationship just seemed even more ridiculous by the complete lack of chemistry and way too much awkwardness between the two.

Season nine was the final one for the series, much to the dismay of fans. The ending of the show was made even worse when one of the main and most favorite character’s Nathan Scott was largely absent for a lot of the episodes. In season nine, James Lafferty who plays Nathan signed on for only half a season and, as such, producers created the extremely bizarre kidnapping surrounding his character. The storyline added some intense drama and intrigue into the show without a doubt, but the fact it was an impromptu fix to adjust to Lafferty’s contract is evident by how absurd much of it was. The whole thing being dragged out while other “normal” things went on seemed especially weird, but of course it left us with the hilarious (yet very dark) rescue episode, so it wasn’t all bad.

Introducing Clay Evans as a new main character following the exit of Lucas allowed writers and producers to open up a whole new world of drama in Tree Hill, something lovable and seemingly easy-going Clay’s life was chalked full of. It doesn’t take too long before viewers learned Clay’s wife had died suddenly and tragically from a brain aneurysm, yet he had not properly dealt with the death. After that shocking reveal, Clay meets Katie, a girl who looks uncannily like his dead wife Sara and then takes an unhealthy obsession with Clay. It was a hard storyline to wrap your head around because it was so unbelievable, but it was made even worse when it seemed Clay and Quinn could both actually die after being shot by the pyscho Katie, not to mention the whole thing was a little too reminiscent of both the “crazy” Carrie situation and pyscho Derek.

3. Clay and Quinn as Ghosts

More than once in One Tree Hill was the supernatural type of storyline approached, and it happened yet again in season 8, after Clay and Quinn are both shot by Katie. In the episode, “I Can’t See You, But I Know You’re There,” Clay and Quinn’s detached spirits wander around while their bodies lie in the hospital. The tone of the episode was definitely strange, but most of all the whole thing seemed so soap-opera like and distracted from how great the show can be with “normal” storylines. To a lot of fans, it was episodes such as this one that signaled the show was losing its grip and grasping at ideas to bolster the show, but it was really unnecessary.

After there was psycho Derek, but before there was crazy Katie, One Tree Hill‘s most infamous psychopath was “Crazy” Nanny Carrie. The original storyline wasn’t too ridiculous as she obsessed over Nathan, although it did anger many fans as yet another thing threatened to ruin Naley, especially as they were getting through a rough patch. Things did get extremely over-the-top however when she made her reappearance and not only hit Dan with her car but kidnapped and tortured him. It was borderline horror/drama when she made him eat bugs, increased his pain and detailed how she was going to kill him and kidnap Jamie once and for all. The icing on the cake however came when it was discovered that her obsession with Jamie and mental instability derived from the loss of her own son, much like the dead girlfriend scenario with Derek. Not to mention, Dan killed her right in front of Jamie and we he miraculously carried on with life like nothing happened.

The death of Keith Scott was the most devastating moment on the show and the school-shooting episode was the first sign the show was going to be much deeper and darker than many thought. Although it will always remain one of the most memorable and best episodes, the storyline in discovering his killer became extremely ridiculous. In Season 4’s “Songs to Love and Die By,” the show took its first foray into including the supernatural. While in a coma, Lucas is visited by Keith who shows him what his family and friend’s lives would be like without him. It was definitely strange that the show took on the whole “spirit” plotline, but the most absurd aspect about it is that by Keith taking him back to the scene of the school shooting, Lucas sees something he missed in real life. It is this revelation that hinges on Lucas and everyone else finding out it was actually Dan who killed Keith, which is important information but absolutely ridiculous it was revealed to him via the ghost of Keith.