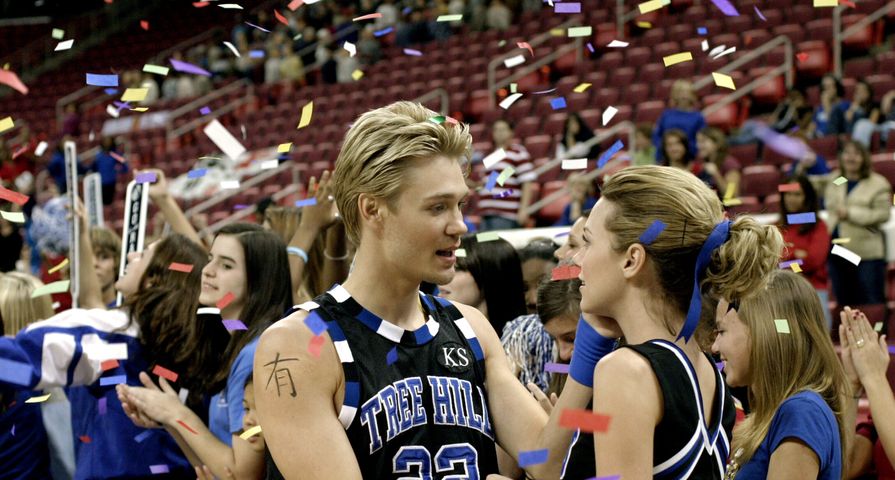 One Tree Hill saw many amazing romances, friendships and family relationships over its nine seasons, but at the center of it all was Lucas and Peyton, for six seasons at least. Looking back on the show, it easier to see that the two really did have an epic romance and more than a few heart-wrenching, heartwarming and sometimes tear-jerking moments that fans can watch over and over and still have the same reaction to. Many times it seemed that Lucas and Peyton were never going to make it work, but somehow they always found their way back to each other and because it is too hard to rank their moments, here are Lucas and Peyton’s most memorable moments in order from first to last.

Through all of the epic moments, both good and bad, that happened between Lucas and Peyton over six seasons, it all had to start somewhere. It was made clear that Lucas had been interested in Peyton from afar for awhile and she was in a toxic relationship with Nathan, but their first real interaction is ingrained in fans’ minds. After her car breaks down beside the lake and Nathan is too busy working out to come help her, Peyton calls a tow truck of course driven by Luke which leads to one of Peyton’s most iconic lines. The moment not only revealed what great chemistry the two had, but also demonstrated Peyton’s guarded nature, and Lucas’ ability to understand it, but also show how much further they had yet come with Peyton pointing out they don’t even know each other after Lucas opened up about Dan being his and Nathan’s father which made him quit basketball. After Peyton states they don’t even know each other, Lucas responded, “Maybe that’s the point.”

One Tree Hill: 15 Popular Characters Ranked From Worst To Best

In the beginning of Lucas and Peyton’s story, a lot of small actions and words began to develop their relationship before it ever became romantic and one of the biggest moments between them all came down to one sentence. After Lucas submitted Peyton’s artwork to THUD magazine, she became enraged at him for invading her privacy and reveals to him that she doesn’t submit her own work because she doesn’t think it is good enough and she wants it to be good enough to change people or affect people. After dealing with the team trying to get rid of him, Lucas finds inspiration in Peyton’s art and as he runs in for the game and says, “Your art matters…it’s what got me here.” The moment was so memorable because it was the moment that fans, and Peyton, realized that Lucas understood her and cared more for her and her art than anyone else had, especially Nathan.

At this point, Peyton and Nathan had broken up while Peyton and Lucas had grown closer but did not have the courage to take it any further, until the big basketball party at Dan Scott’s house. This episode featured a few of “Leyton’s” most critical moments because on Brooke’s dare, Peyton kissed Lucas for the very first time while admitting she does have feelings for him. Of course, this also led to the two almost hooking up for the first time, before Peyton got upset with how emotional Lucas made it. This was one of their most memorable moments because through all the build-up between the two, it was clear things weren’t going to be easy for them and was just the beginning of the obstacles and emotions that would keep the two apart.

Season three’s “With Tired Eyes, Tired Minds, Tired Souls, We Slept” is perhaps the series’ most poignant and most memorable episode of all which also featured a big moment for Peyton and Lucas. After getting shot in the leg during Jimmy Edwards’ school shooting, Peyton hid in the library and when he found out she was still in there, Lucas ran in to find her. The episode was powerful and emotional, and scared of losing her life, Peyton told Lucas, “You’re always saving me […] If I say I love you right now, will you hold it against me? Cause I’ve lost a lot of blood,” before kissing him. Leading up to the moment Peyton had been struggling with seeing Lucas and Brooke together and her admission to loving him proved that their story was far from over. Not to mention, Lucas risking his own life to save Peyton’s was monumental in proving even to Brooke that Lucas still loved Peyton even if she didn’t want to admit it.

One Tree Hill: 10 Most Memorable Brooke And Peyton Moments

It’s almost hard to believe how much time Lucas and Peyton actually weren’t together in the early seasons as they are known as the core One Tree Hill couple of those seasons, which means when they finally admitted they wanted to be together it was arguably their biggest moment of all. Leading up to the State Championship game, Peyton had asked Lucas who he wants standing next time when his dreams come true and he replied “Brooke.” While heartbroken, Peyton kept her feelings to herself, but finally after winning the game-winning basket, Lucas realized it has always been Peyton. Through all of the chaos and excitement of the win, it truly seemed like they were the only two in the gym when Lucas and Peyton could finally be together without any issues or any one else to be concerned about. The episode brought full circle, season one’s rivercourt match with Lucas against Nathan, and how in love Lucas was with Peyton when he said, “I’ll be seeing you.”

With all of the drama, fights and cheating, it seemed rare for Peyton and Lucas to actually have happy, care-free moments and after finally becoming a couple, it was a breath of fresh air to see them actually enjoy each other and be together. One of their best, most heartwarming moments was in season four’s “Resolve” with their cookie dough fight. The moment was small but especially memorable because it was so different for both of them to just let-loose and have fun, and incredibly cute when at the end Lucas says, “You know, I take that back. This is the best cookie I’ve ever had.”

Fans waited a long time for Lucas and Peyton to finally get to where they were for the last half of season four, and were left on the happy note that the pair were going to stay together despite Peyton chasing her dreams in Los Angeles and Lucas staying in North Carolina. Unfortunately, season five revealed the pair were no longer together, and when we were finally shown what happened, it was heartbreaking. In “I Forgot to Remember to Forget” flashbacks show the pair in a strained relationship because of the distance and Peyton’s demanding job so Lucas heads to L.A. with intentions of proposing. Although Peyton said she would marry him “someday” Lucas took it as a total rejection. While this was one of their worst moments, it was also extremely memorable because once again it seemed as if the two would never get their “happily ever after,” and once again revealed to fans there would be a lot more drama and obstacles for the two to be together and questions on if they would ever be together again.

Through its many seasons, One Tree Hill mastered the art of the cliffhanger and season five’s was one of the biggest. After a whirlwind of Peyton still loving Lucas, Lucas getting engaged to Lindsey but then left at the altar, and Lucas growing closer to Brooke through her fostering of baby Angie, there was no telling who Lucas wanted. Of course, the season ends with Lucas leaving Tree Hill and telling someone on the phone he loves them and is going to Vegas and wants them to come and get married, but of course no one knows which of the three he is talking to. After a long wait, season six’s premiere episode revealed it was in fact Peyton and she went to Vegas with him. For the first time in a long time the pair were genuinely happy and trusted their love and each other enough to know they wanted a wedding with their family and friends, not an elopement in Vegas. After everything they had been through, finally being ready and engaged was a huge moment for Peyton and Lucas and Leyton fans everywhere.

Just as things were going really well for Peyton and Lucas as they planned their wedding, things seemed to take a scary turn when Peyton feared she had cancer. Episode 12 ended on a cliffhanger with Peyton in tears as she calls Lucas while looking at a photo of her biological mom Ellie who died of cancer. In the phone call, Peyton reveals she doesn’t have cancer — she is pregnant, and for fans it was hard not to cry along with the Peyton as she told Lucas he was going to be her “baby daddy.” The pair had been through so much and fans had been there for it all, so for the two to come so far as to be preparing for their own baby was an amazing One Tree Hill moment.

One Tree Hill: 10 Most Memorable Lucas And Brooke Moments

After discovering Peyton’s scary and potentially dangerous pregnancy health issue, Lucas and Peyton were still determined to fight for their perfect wedding. While it may have had to be thrown together quickly, it was the pinnacle moment to Peyton and Lucas’s saga that fans had been waiting for. While the threat of Peyton’s condition loomed, it was all forgotten while they happily and tearfully finally exchanged vows beside the lake where they first met all those years before.

Lucas: “Peyton, I’ve loved you since the first time I saw you. And this ring, and these words, are simply a way to show the rest of the world what’s been in my heart for as long as I’ve known you. I love you, Peyton Elizabeth Sawyer. I always have and I always will.”
Peyton: “Lucas Scott, we have been through so much together. And despite how confused I’ve been or lost I might’ve gotten, there was always you finding me, and saving me. You deserve to be adored, so that’s what we’re going to do. Your baby and me, we are going to adore you for years to come. I am so terribly in love with you, and I always will be.”