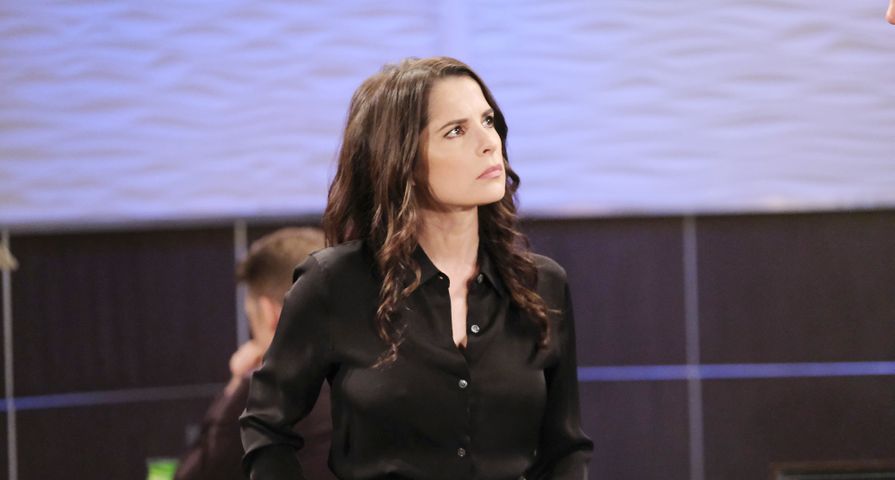 Unfortunately, due to the impeachment trial last week, General Hospital (GH) fans suffered from a ton of pre-emptions. The good news is that now that the trial is over, viewers will enjoy some fresh new episodes starting Monday, February 15th! What’s on tap in Port Charles over the next couple of weeks? Romance, secrets revealed, and plenty of action! Learn more about storylines by checking out the GH spoilers for February 15 to February 26, 2021.

GH spoilers indicate that Nina will learn more about Carly and Jax’s involvement in Nelle’s passing early on in the week. As the days go by, Nina will not only get angry, but also down-right furious! She’ll eventually reach out to Jordan looking for help. Could Nina want Benson’s case re-opened? Could she go to her with what she’s learned? In other news, Jax will make an appeal of sorts to Finn during the week of February 22nd.

GH spoilers for the week of February 15th hint that Carly will reach out to Diane. Could this be because of something Nina does (or threatens to do)? She knows Carly and Jax were involved in her daughter’s passing and tried to cover it up. Momma bear will look for a way to nail them; however, Diane may be able to nip anything that Nina tries to do before she does it.

With everything that has happened recently, GH spoilers state that Cassadine will feel as if he may have a second chance. Could Nina open her heart back up to him, considering all that has happened as of late? In other Nina news, she’ll make a vow to someone as the days go by.

GH spoilers for the week of February 22nd reveal that Willow and Michael will review what’s gone down recently. Does this have to do with their relationship or the fact that they know Nina is Wiley’s biological grandmother? Will they decide she deserves a chance to be in Wiley’s life or is there more to this?

While it seems as if Alexis is on the road to recovery, GH spoilers reveal that she will slip up a tad this week when she grabs a mini bottle of alcohol while her daughters aren’t looking. Sonny’s funeral will take place this week, and Davis might feel like she needs something to hold it all together. As the days go by, she will come clean, so it might be about this or something else in her past.

While Valentine’s Day will be celebrated a tad late in the land of Port Charles (thanks to pre-emptions), GH viewers should gear up for some romance between Ava and Nikolas, as well as Sasha and Michael, and Chase and Willow, over the next two weeks. With that said, there will be some snags in the dates that take place between Michael, Sasha, Chase, and Willow.

Sounds as if Curtis and Portia will also be enjoying some unconventional Valentine’s Day fun. GH spoilers tease that the two will spend time during a stake-out this week. Should Jordan be concerned? In other Curtis news, he’ll confide in Sam the week of February 22nd. Sounds as if he’ll believe it is time for a change.

Does Sam believe it is time for a change? GH spoilers hint that she and Dante will be on the “same page” this week. Sounds like they’ll “make a connection,” but does this have a romantic undertone, or will it have to do with WSB stuff? In other related news, teasers for the week of February 22nd imply that Liesl will escape a confrontation, just in the nick of time.

Speaking of Sam, GH spoilers suggest that she and Jason will spend a little time together in the coming days. Will they realize just how much they’ve missed each other? The answer might be “no.” After all, added teasers imply that Britt will also be in Jason’s orbit a lot in the next couple of weeks. She’ll not only confide in him about something, but she’ll also reach out for help. Should Sam be worried? Probably!

One person who should be concerned is Brando! GH spoilers for this week hint that he’ll be on the wrong end of Cyrus’ anger. As the days go by, Renault will summon him and Corbin will desperately try and pretend he’s innocent. Is the jig up for Brando? There’s a good chance he could wind up in a lot of trouble.

Across town, GH spoilers indicate that Olivia will be questioning her life, and where she currently stands. As the days go by, it seems as if something may cause her to explode in fury. Here’s hoping that Alexis and Ned are nowhere near her when she does, as she could cause them some harm in the process.

This week, Lenny will prove to be a friend to someone in need while Lesley will decide to take a stand. Meanwhile, Lucas will misinterpret something. Rounding out GH spoilers for the week of February 22nd, Franco will downplay a situation that gets a little dark. Could he be doing this to calm Liz’s nerves a bit?