General Hospital Plotline Predictions For The Next Two Weeks (September 13 – 24, 2021) 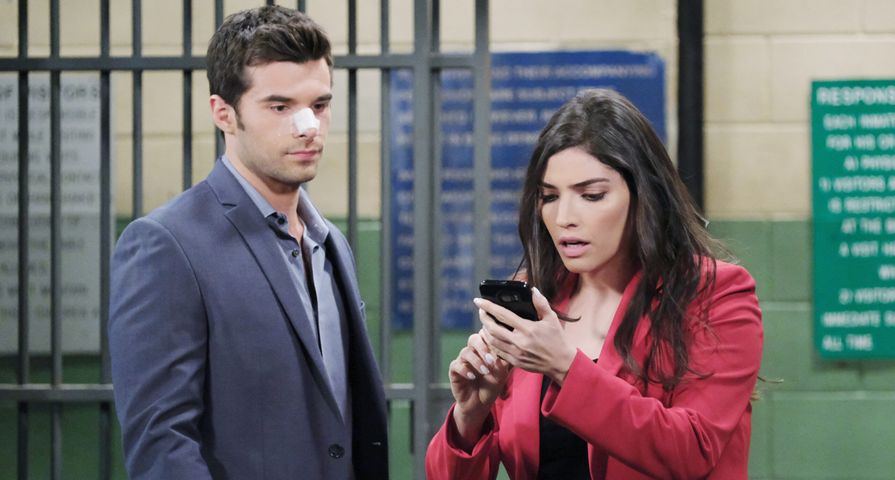 Will Jason and Carly say “I do”? Will “Mike” learn that he’s Sonny? Will the Five Families succeed in their plan? How will Peter play into all of this? General Hospital (GH) fans just love to speculate on storylines! As such, below are some GH plotline predictions for September 13th to September 24th, 2021.

Peter ending up in Nixon Falls was a tad awkward and random. Sure, he was following Maxie so that makes a bit of sense; however, it feels like a plot twist gone wrong. At first, seeing Peter end up at the Tan-O last Friday had GH fans gasp, but now it’s hard to see where exactly he’ll fit in with all of this. Could Peter try to attack Nina or Jax? Or even “Mike”? Could the three accidentally do something to August in self-defense? Could they decide to bury the body? This would detract Jax from stopping Jason and Carly’s wedding, too.

This week’s GH preview video shows a bar going up in flames. It “looks” like the Tan-O, but it could also be an establishment in Port Charles. Two people are also tied up, and one of them “looks” like Nina, but it’s truly hard to tell or confirm. Could Peter tie up Jax and Nina and try to light the building on fire? Is he headed Maxie’s way? The fire might also be a part of the plan the Five Families have been concocting.

With all that said, it does seem as if Jax will try to stop Jason and Carly’s wedding. He may (or may not) get distracted by Peter, but after that, his focus will be doing all he can to ensure Carly and Jason don’t end up saying “I do”. GH spoilers hint that he’ll reach out to Maxie during the week of September 13th. Is he doing this to stop Carly, or possibly warn Jones about Peter August?

Most fans prophesized that Jason and Carly’s wedding would be stopped. Either Sonny would remember who he was, or Jax would bring “Mike” to the ceremony at the umpteenth hour. GH spoilers over the next week seem to indicate that Morgan and Corinthos will say their “I do’s”. Added teasers hint about things that will happen at the reception, which clearly means Jason and Carly become “husband and wife”.

9. Phyllis Will Learn The Truth

GH spoilers seem to hint that Nina will have to “come clean” to Phyllis during the week of September 20th. Could something Peter does land “Mike” in the hospital? Will Jax tell Phyllis the truth or will she overhear something? If there is a medical emergency with “Mike”, this could also delay Sonny’s return to Port Charles.

Do any other fans feel as if September 17th will be the longest day in GH history? The day began sometime during the week of September 6th and will continue to roll on until September 20th (perhaps even longer). In fact, Carly and Jason’s reception will take place that week, as indicated through GH spoilers. Will viewers ever move past September 17th? Eventually! But everyone should prepare to relive the Groundhog Day movie in the land of Port Charles.

7. What’s A Few Sparks Between Some Exes?

Speaking of the wedding reception, GH spoilers for the week of September 20th reveal that Maxie and Spinelli will feel some “sparks” at the event. Does a dose of nostalgia hit them? Could they decide to reunite? How will this complicate things in terms of Baby Louise/Bailey? Will the two just feel sparks, or could they decide to cross a line?

Speaking of sparks between friends, now that Chase is moving on from Willow, could his friendship with BLQ turn into something more? GH spoilers hint that something could evolve between the two during the week of September 20th. These two have been close in the past; however, he’s always been hung up on Willow. Now that those feelings are slowly vanishing, perhaps he’ll see Brook Lynn in another light? This could also complicate things with the baby-switch situation.

5. Michael and Willow’s Next Steps

Fans will get to see more of Willow and Michael during the week of September 20th. GH spoilers suggest that they’ll start to decide how to “move forward” now that Chase is better. Do they finally come clean about their relationship with everyone? Will they feel as if it’s time for Willow to move back into the mansion so that they can officially become a family with Wiley?

4. Tensions Rise Between Olivia And Ned

Just when things were moving well between these two! GH spoilers imply that Ned will try to have a conversation with Olivia about Leo. Sounds like she won’t want to hear about it. Added teasers for the week of September 20th note that Falconeri won’t be pleased with Quartermaine when she finds out he hasn’t been totally honest with her. Could he decide to take Leo to see someone at the hospital, as Austin advised, against Olivia’s wishes?

Trina will have enough of Esme’s games over the next couple of weeks. She’ll try to recruit Cam to help her oust Spencer’s girlfriend, but will he oblige? Other GH spoilers for the week of September 20th note that Cameron will also work overtime to resolve the issues between Spencer and Josslyn. Meanwhile, Esme will try to get a little closer to Joss, as well. Sounds like this is the beginning of a whole lot of drama for Port Charles’s teen scene.

2. Kristina’s Back In The Picture

As Ava heads out of town during the week of September 20th, GH spoilers imply that she’ll ask Kristina to look after Charlie’s Pub. It’s nice to know that Sonny’s daughter will be back on the canvas. So are writers setting her up for a new storyline? Will Charlie’s Pub soon become the “happening” place to be?

Sounds like Valentin and Anna will once again be in each other’s orbits. Both will get disturbing calls over the next two weeks, and both will be reaching out to each other. Could this drama have to do with Liesl and Victor Cassadine? More importantly, could all of this bring these two closer to a romance?