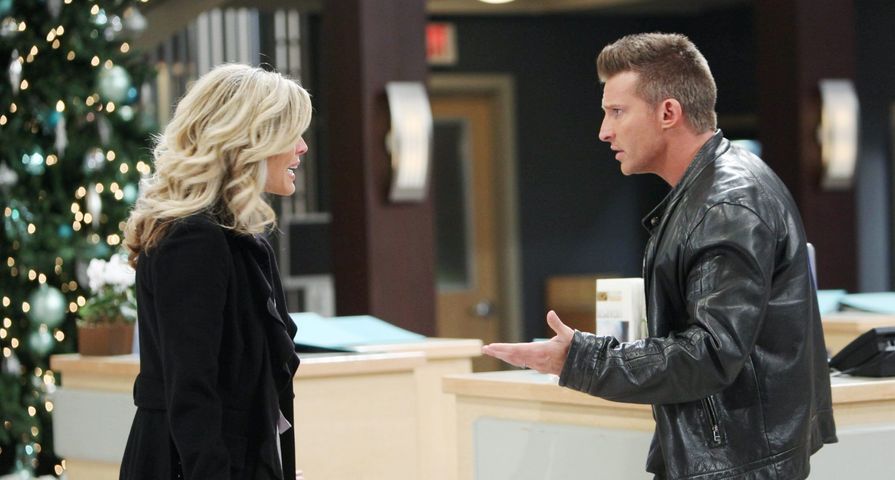 Will Nina decide to return to Nixon Falls, or will “Mike” visit her? Will Jason continue to keep Carly out of the loop, as it relates to “the business”? How complicated will things get between Michael, Willow and Chase? There’s nothing General Hospital (GH) fans love to do more than speculate. As such, below are some GH plotline predictions for June 28 to July 9, 2021.

Nina has some conflicted feelings about Mike. Sure, there’s one major part of her that has feelings for him, but he’s also incredibly missed in Port Charles. Having said that, she feels he is ultimately “safer” in Nixon Falls. Reeves will likely decide to stay away from “Mike” and Nixon Falls moving forward. However, she’ll still keep it hidden that Sonny is alive.

She’ll visit “Mike” in Nixon Falls to tell him this. She’ll go on a spiel that her life is in Port Charles with her grandson, and his new life is with Phyllis and Lenny. Before she heads back to her hometown, the two will have a night of passion together. She’ll slip out in the morning, leaving “Mike” confused and wanting more.

GH spoilers indicate that Phyllis will encourage “Mike” to visit Nina during the week of July 5th. He’ll take her up on the offer to borrow her car. Sonny will return home; however, he’ll go undetected. Not everyone in town knows who Corinthos is (maybe he runs into Dr. Austin), but when Nina sees “Mike”, she’ll pass out from being both caught off guard and realizing that her two worlds are colliding.

Carly will ponder a major decision this week, and also reach out to Diane. Sounds like she’ll be looking into the legality of a specific issue. Corinthos enjoyed her mob power grab, and there is a good chance she’s not ready to let go of it so easily. Added GH teasers note that she’ll gather the family together during the week of June 28th. Could she let everyone know what she’s up to? Will she make it hard for Jason to refuse a possible partnership? Or will she find a way to push him out of the Corinthos business entirely?

8. Sparks Fly Between Anna And Valentin

It’s a moment many fans have been waiting for! This week Anna and Valentin will be stranded, and by the time the week of July 5th rolls around, GH spoilers reveal that sparks will fly! Will these two simply kiss, or will there be much more? Nothing like spy intrigue and adventure to bring two people together!

7. Olivia Senses That Something’s Off

If Maxie continues to come around the Quartermaine mansion, could Olivia sense that something is off? Could she overhear a conversation between BLQ and Jones? Maxie’s recent visit to “Bailey” garnered sympathy from Anna and Valentin, but Olivia has a keen eye for seeing through situations. Could she be onto the plan the two ladies have? Could Olivia figure out that “Bailey” is really “Louise”?

Things will continue to get “sticky” where this long triangle is concerned! Willow and Michael will feel torn about revealing their feelings for each other at Chase’s expense. Chase will likely remain in his state of paralysis over the next couple of weeks, which means Millow will struggle with the lie they’ve told. Willow will feel awful for both Chase and Michael, but for now, the situation “is what it is”.

5. Portia Throws Her Hat In The Ring

Britt and Terry have thrown their hats in the ring for the Chief of Staff role at the hospital but there’s a good chance that Portia will decide to jump into the competition as well. She’s more than qualified! Things won’t get ugly between these three, but fans will be kept on their toes around the announcement. Who will end up being the next COS at the hospital?

Both Portia and Britt are great candidates, but Terry might win the coveted spot. It would be nice if Terry got a stronger storyline within GH. Both Portia and Britt are immersed in some interesting angles right now, and many fans would love to see Terry get more airtime! Perhaps the “powers that be” will decide to give her a bigger role within the soap by appointing her to the COS hospital role!

Finn will start “second-guessing” his decisions this week. Does he believe it’s time to move Peter’s body, or will he and Liz think August is in the best place possible, for now? Could someone in the hospital come close to finding Peter? Both will likely work very hard to keep their dirty little secret “hidden”.

2. Is Austin A Quartermaine?

GH fans will continue to wonder about Dr. Austin. Spoilers hint that he’ll reach out to Carly during the week of July 5th and inquire about the Michael Corinthos Wing at the hospital. It’s hard not to think that he could be a Quartermaine, but could he also be a long-lost relative of Sonny’s? He may be too old to be a son… but could he be a brother or nephew?

It doesn’t seem as if Alexis will be taken out of solitary confinement anytime soon. GH spoilers for the week of July 5th reveal she’ll still be in this isolated state, which could affect her mental health. Could all of this “alone time” cause her to have an epiphany about Shawn’s case and how to get him exonerated?