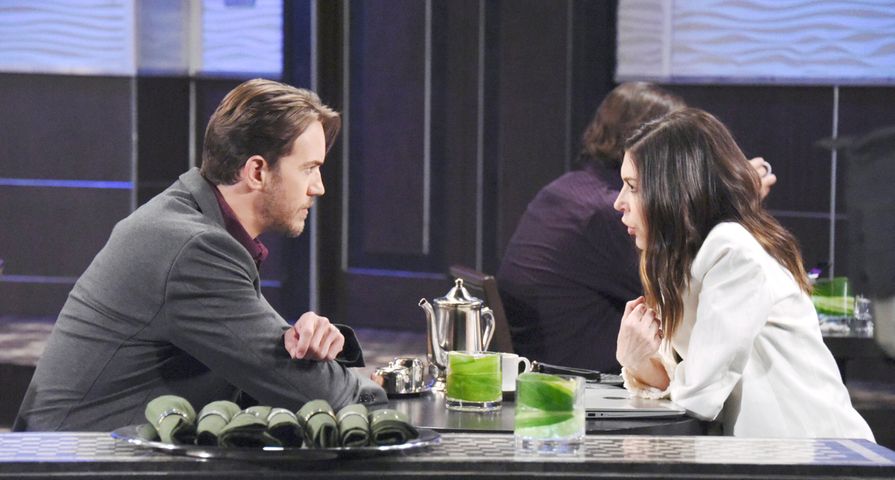 Will Nina launch a custody suit against Michael and Willow for Wiley? Will the double wedding go as planned? Will Dante try and rid the world of Peter August? As February Sweeps winds down and March pops up, the drama will continue to heighten on General Hospital (GH). Fans just love to speculate, so below are some GH plotline predictions for February 22 to March 5, 2021.

Nina has made it no secret that she wants to rewrite the wrongs she made with Nelle by making it “right” with Wiley. Could she try and launch a custody battle for her grandson? Would she even have a fighting chance? Hard to say, but Nina is being unpredictable right now.

11. Michael Will Try To Smooth Things Over

Nina will be venting about Carly over the next couple of weeks. She’ll also reach out to Valentin for some help with her situation, which may have him thinking he has a second chance with her. Regardless, she has revenge on the brain, but does this include Wiley? GH spoilers for the next two weeks hint that Michael will try to extend an olive branch to someone. Could this be Nina? He’s a good father. He knows that Nina deserves to be in Wiley’s life and he’ll hopefully come up with something that will re-assure Reeves that she’ll have a connection to her daughter through her grandson.

10. Michael Aims For A Compromise

GH spoilers for the week of March 1st state that Michael will be willing to compromise on something. Could he agree that Nina should play a big role in Wiley’s life? He’s a reasonable person. He realizes that Nina is a good person who is dealing with a hard situation. He may agree to weekly visits, even sleepovers, and such as Wiley gets more comfortable with Nina. The big question is, will Reeves agree to this?

Will the double wedding between Anna, Finn, Maxie, and Peter go off as planned? It’s hard to say. February spoilers do tease that as the nuptials approach, Maxie will learn the truth about Peter. Anna is bound to find out about August’s wrongdoings this week. Added teasers imply that Devane and Cassadine will devise a plan to move forward. With that said, Valentin knows the truth about Peter, so what role will he play in all of this? Cassadine may try and swerve Anna from doing anything drastic.

8. Maxie Will Start To Have Doubts

It seems as if Maxie could start to have doubts about Peter this coming week. While the double wedding was supposed to take place in February, with pre-emption delays due to the impeachment trial, it’ll happen the week of March 1st. While Jones will begin to wonder about her hubby-to-be, she’ll remain firm about going through with their, “I do’s”.

GH spoilers for the week of March 1st indicates that Liesl will try and get a message to Maxie. This might be a warning about marrying Peter. Jones will be rattled about it; however, she’ll still get ready for her big day. But it seems as if something could either delay the wedding or cancel it altogether.

GH spoilers tease that Dante will land in some trouble. They also indicate that he’ll visit Peter early on the week of March 1st. Could Falconeri go through with what Liesl has programmed him to do? Maxie will be “waiting” on Peter before their wedding begins. She’ll be dressed and ready to go, but her fiancé will be MIA. Will August show up to the ceremony? Will Dante shoot him before he’s able to?

GH spoilers for the week of March 1st indicate that Chase and Jordan will find themselves very busy. This teaser lands in-and-around the time frame for the double wedding. Could Dante try and shoot Peter, but hurt someone else instead? Even just shooting Peter could cause these two officers of the law to jump into work mode.

4. Added Clues Around Peter Being Hurt

If Peter gets shot, the wedding would be canceled. GH spoilers do not imply that the ceremony goes as planned. Anna will be confronted by Peter, which means both their lies to each other could come full circle. Plus, Valentin will confess to Peter that he cares for him. If Peter lands in the hospital, this teaser could mean that Cassadine is relaying his affection for the young man over a hospital bed.

There’s a good chance that August learns that Anna knows the truth about him. There’s also a very good chance he learns that Anna is his aunt and not his mother. Anna will also admit to Robert that she’s made some mistakes recently, so Maxie and Peter might not be the only couple that has a falling out after the double wedding takes a disastrous turn.

GH spoilers reveal that Chase will be there to support Finn next week. If the double wedding is canceled because of chaos, then Hamilton will be upset; however, if Finn learns that Anna’s been keeping secrets from him, he’ll be downright devastated and could lean of Chase as his heart breaks. Sounds as if Finn will need his family around him. This is more than just “my wedding ended in chaos”. It seems as if it’s a situation that is due to a relationship ending.

Could Franco finally learn why he’s hearing Peter’s voice? Franco will downplay a major incident this week, which could have Elizabeth reeling. As for the week of March 1st, Baldwin’s tumor will get complicated. Could he be the reason Jordan and Chase or so busy? GH spoilers are suggesting some dire consequences with Franco’s downward spiral. With that said, Franco will make a stunning discovery that week, too.