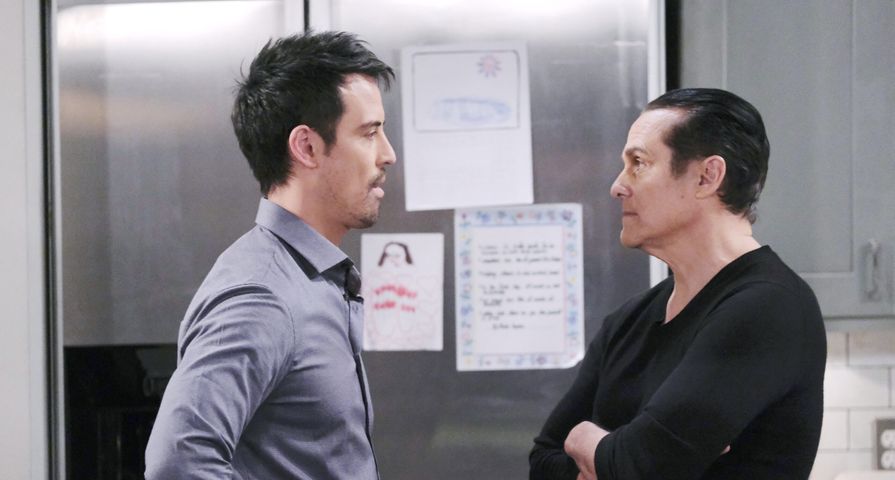 General Hospital (GH) fans have been speculating for months now on what could happen in the land of Port Charles once the show resumed filming again. Now that new episodes (and spoilers) are here, it’s hard not to wonder what the next two weeks could bring in the land of Port Chuckles. As such, below are some GH plotline predictions for August 3 to August 14, 2020.

It seems pretty clear that Monday’s episode will pick up where the last left off, and Nina will take the stand. With that said, it also seems as if Nina’s testimony will be one that doesn’t paint Nelle as the best candidate for sole custody of Wiley. What will likely happen is that she will say nice things about Nelle, but may also say not-so-nice things about the young lady. Maybe she’ll be prompted to do so. Diana is an incredible attorney that has a way of getting people to slip up. With all that has been revealed during the custody hearing, Nina’s testimony could make or break Nelle’s chances around getting her son back.

GH spoilers reveal that Nelle will be angry and surprised when the judge awards custody of Wiley to Willow and Michael. The couple will grow closer as a result. Unfortunately for Nelle, the news will cause her to spiral out of control during the week of August 3rd.

10. Nelle Lashes Out At Nina

GH spoilers indicate that Nelle will be difficult to deal with and confrontational this coming week. She’ll also “demand” to see Wiley at one point. Nelle will be upset she didn’t get her way, and she’ll also likely lash out on Nina at some point the week of August 3rd.

9. Nina Finds Out Nelle Is Her Daughter

Nelle may even lash out on Nina right after the judge’s decision at the courthouse. As Nelle will have her necklace around her hands at that point, Nina may see it, and realize that Benson could be her daughter. She’ll feel very conflicted over what she’s done, and she won’t be sure what to do next. There’s also a chance she sees is as she is stepping down from the stand – this would heighten the drama up a notch or two.

GH spoilers hint that Willow will receive an unexpected visitor the week of August 10th. Could this be her mom? It may also be Nina. If Nina realizes she is Nelle’s mom, she might take a very sudden interest in Wiley and want to see her grandson right away. She could easily fluff it off as a follow-up visit from her testimony the week before.

Across town, GH spoilers suggest that Valentin will be strategizing with Martin, continuing his pursuit of ELQ. With Brook Lyn’s shares, he’ll accomplish this feat, leaving Ned scrambling. ELQ’s shift in power will happen in the next couple of weeks and the Quartermaine family may be very disappointed in how Ned’s handled things as of late. Especially as the company’s reins were handed over to him from Michael, as he was focused on Wiley’s custody.

GH spoilers indicate that Ned and Olivia won’t see eye-to-eye this week, so it is hard not to wonder if the ELQ stuff won’t take a toll on their marriage. Mix this in with Brook Lynn’s shenanigans, plus Olivia’s obsession around where Dante could be, and there might be cracks in this Quartermaine marriage.

GH spoilers for the week of August 10th do reveal that Dante will surface. While there has been news that actor Dominic Zamprogna will reprise his Dante Falconeri role soon, no airdate has been released. There’s a good chance fans could see him onscreen next week, and there’s also a chance that his name and location could be mentioned to help build up his return. Only time will tell.

Sonny will continue to struggle with what he should do about Mike’s condition. While before reruns hit, Sonny turned to Jason for guidance, GH spoilers suggest that an emergency could speed up the decision making around his moral dilemma. During the week of August 10th, Sonny will turn to Felix for some help. Seems as if while he will be distraught, Corinthos will make the right decision when all is said and done.

Could Dante be returning for Mike’s funeral? Could Sonny decide to pull Mike from life support in the coming days or weeks? Dante may decide to come back to the little town to support his dad, and grandfather, during this difficult time. There’s also little information on whether or not Dante’s return is a long-term or short-term gig, so he may slip into town, only to quickly slip out.

GH spoilers hint that Portia and Finn will get closer the week of August 3rd, bonding over their daughters. They are both doctors, and while he and Anna are set to get married, Peter could place a wedge between them and their “happily ever after.” With Peter’s lies about to catch up to him, perhaps GH is teasing a friendship between Portia and Finn that could turn into something deeper?

Seems as if there is a massive confrontation on the horizon between Nikolas and Franco for the week of August 10th. In fact, GH spoilers not only suggest this but also imply that when all is said and done, Franco will end up comforting Ava, while Nik will thank Lulu for supporting him. Could Ava and Nik be fighting, where Franco jumps in to defend Ava, and Lulu tries to defend her brother? Something big is set to happen soon, and is sure to blow this “frenemy” relationship out of the water!