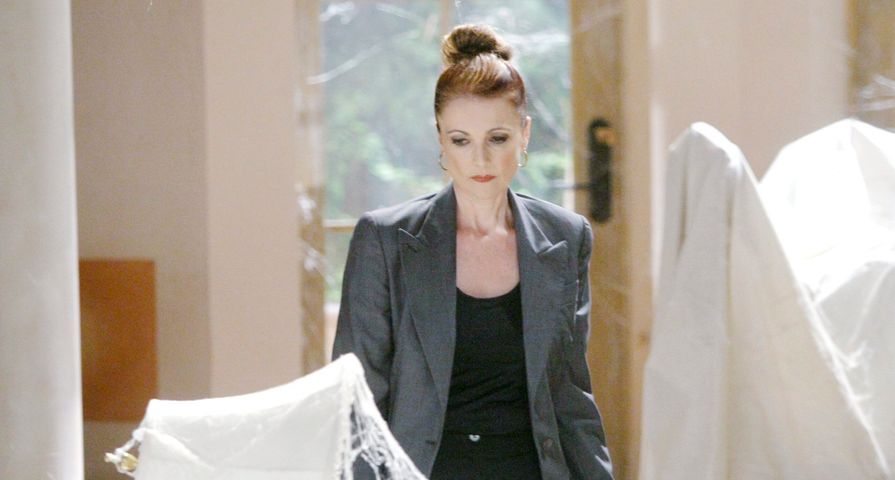 Peter August is officially back in the land of Port Charles (well, sort of), so how will he play into September storylines? What will Charles Shaughnessy’s role be all about? Will Drew Cain ever return home to Scout (and Sam)? General Hospital (GH) fans love to speculate! As such, below are some GH plotline predictions for September 2021.

Peter August has officially returned to the land of the living! Fans knew he would, but it was still so unexpected at the same time! He’s clearly focused on Maxie, but being in Nixon Falls means that he will likely have his hands in many storyline pots. He could spell disaster for Nina and “Mike”.

Viewers can’t say whether Peter knows that Bailey is Louise. August has already learned a lot and might learn the truth about Louise by continuing to snoop in the shadows. There is a good chance that Peter decides to blackmail Nina. He will demand that Reeves keeps his status a secret and hands over Maxie (and potentially Louise), so that no one has to find out about the thing she has going on with Sonny.

Could Nina decide to go along with Peter’s plan? She may reach out to someone she trusts, like Liesl or Curtis, for the assist. She knows that if she turns to either of these people (but especially Obrecht), they’ll keep Sonny’s status a secret and help her rid the world of Peter August. Nina will do all she can to protect Sonny, Maxie and little Louise. With that said, Liesl will go missing at some point in September. Could August take her as part of his plan?

9. Who Will Charles Shaughnessy Play When He Enters GH?

Most are familiar with actor Charles Shaughnessy. In the land of soaps, he played DOOL’s Shane Donovan. Plus, he starred in the highly popular primetime sitcom, The Nanny. For those that may remember, Shaughnessy also once played Alistair Durban on GH back in 1984. Durban was Holly Sutton’s con artist cousin. Will he reprise this role, or enter the show as an entirely new character? With his English accent, he could be linked to Anna Devane or the WSB. Shaughnessy plays the perfect super-spy!

Will Holly Sutton return to Port Charles? Her comeback was cut short, as this storyline began to unravel right before the global health crisis happened and travel restrictions were implemented. As such, actress Emma Samms could not film the show. Now that things have seemingly settled down, could Holly finally come back to Port Chuckles? Will she be rescued? Will Shaughnessy’s character help bring her home? Could he be behind her kidnapping?

7. Drew Comes Back To Town

Drew Cain is officially back on GH, but he hasn’t hit Port Charles yet. This is sure to occur in September. With the help of Dante, Anna and Curtis, Sam will be a part of rescue efforts to bring Cain back to Scout. Dante and Sam will continue to bond during this mission, but when McCall sees Drew, all bets will be off.

There’s even a small chance that Sam and Dante could hit the sheets before Drew comes back. Things could get very dangerous, and Sam could get highly emotional. The two might get caught up in a night together, and may locate Cain the following day, which will make things very awkward between Dante and Sam. With that said, McCall will feel conflicted once she sees Drew — especially since she technically left him for Jason, and things didn’t exactly work out on that front.

Speaking of Mr. Morgan, do any other fans get the feeling that as Carly and Jason continue to play “pretend wedding”, they’ll eventually catch some feelings? Especially Carly! These two have always had a unique friendship with blurred lines. They love each other, and in many ways, there is an unspoken intimacy between them.

4. The Two Make Love… Before The Wedding

There’s also a good chance Jarly will make love before the wedding. Maybe they decide to spend a (fake) romantic night somewhere to make their engagement seem legit, and Jarly gets caught up in a moment. Maybe Carly breaks down in front of Jason at one point, and the two do the deed because emotions get too high.

Back to Sonny and Nixon Falls: Peter August or not, Sonny will continue to have flashbacks. There’s a good chance something triggers his memory. Most fans believe that Sonny’s memories will come back in time to coincide with the Jarly wedding. He may stop the wedding, oversee the nuptials (in disgust), or catch a glimpse of the honeymoon. Regardless, over the next few weeks, Sonny will remember little tidbits here and there that he’ll try to brush aside — until he can’t bury the flashbacks anymore.

2. Spencer Tries To Break Things Off With Esme

Spencer is smitten with Trina, but his gal-pal Esme has helped him through a lot. After all, had she not set Ava’s car on fire, people would still be pointing to him as Jerome’s stalker! Over the next couple of weeks, Spencer may grow tired of Esme and her manipulations. He may want to pursue a relationship with Trina. Thus, he will try to end things with his current girlfriend.

Yup, he’ll try and break things off with Esme, but he won’t succeed. She won’t allow Spencer to leave without a fight! He is likely her meal ticket, too. Plus, she has so much dirt on Cassadine, she’ll blackmail him into staying with her. He won’t be able to refuse her. She knows too much.