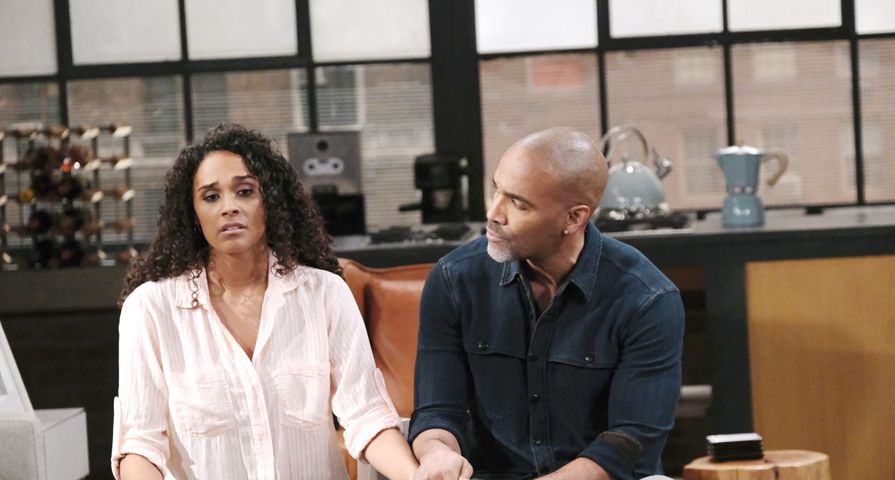 What will happen with Maxie’s baby? Will Peter August ever go down? Will Alexis be able to move on? Will BLQ’s baby help her the Quartermaine’s to regain control over ELQ? So many questions, so few answers! There’s nothing General Hospital (GH) fans love to do more than speculate, so below are some plotline predictions for April 2021.

12. Maxie’s Decides To Use Her Baby Against Peter

Maxie and Britt are set to come up with a plan against Peter, and it may have to do with using his child against him. Baby Lou could be Peter’s kryptonite. Maxie could try and get August to confess something (like Franco’s shooting) during the baby’s delivery or after. It’ll be an emotional time for him, and he could slip up; however, this is a dire game that could end up backfiring on Maxie.

Peter’s done some terrible things in the past, so kidnapping his child so he can raise it away from Port Charles and Maxie, is not something that is “over the top” for him. After all, he was raised solely by Faison. Peter may believe it what is best for him and Baby Lou. He may also see right through Jones’s plan while it’s unraveling.

Sounds like “babies” are being used to lure the men of Port Charles as of late. BLQ seems to have a plan to get back control of ELQ while dangling a baby in front of Valentin. But her recent secret behavior has fans wondering if she is really expecting. There’s a good chance she’s not, and she will likely fool Cassadine into signing over those shares, and then expose the truth. Edward would be proud; Ned will want to crawl into a hole. Meanwhile, Valentin will reel from the betrayal.

The bad news is that there’s no new Cassadine baby in Valentin’s future, but the good news is that there could be a romance on the horizon. Valentin and Anna are set to spend a lot more time together. There’s a new plan brewing with Carly in the loop, and Anna may be the safety net that Cassadine falls on when BLQ comes clean. She’ll certainly help him get over what BLQ did, plus losing ELQ.

There seem to be a lot of hints that Finn and Elizabeth could end up becoming more than friends. Right now, Finn’s been a great support to the new-found widow. He’s checked in on her and even helped to fend off Peter August. But could Hamilton end up being more? Nothing major will happen in April, but there’s a good chance the show explores the chemistry between these two, which could be plentiful! What would Hayden think if she returned to find these two together? It could get spicy!

Things seem to be getting better for Cam, but GH spoilers do imply that he’ll struggle and spiral in April. So much so, he’ll be placed in a dire situation. What could happen to Cam? Perhaps he decides to drink his woes away, and then go on a joyride? Drugs could also be involved, after all, Cyrus has been pushing them on the streets of Port Chuckles and in the hospital. Either way, while Liz will be reeling, she’ll be by her son’s side to help him through it. Perhaps, Finn steps up to offer his support, too. Cam needs a new father figure in his life, and Hamilton is a good role model (for the most part).

Alexis will most likely go to jail in April. She’s set to enter a guilty plea at her trial, and GH spoilers hint that she’ll head to Pentonville. She’ll also do some soul-searching during this time, so could prison help to rehab Davis? There’s nothing quite like hitting rock bottom. With that said, as a lawyer, could she end up on the bad side of some inmates?

Portia and Curtis seem to be gravitating toward each other, and there’s some chemistry between Jordan and Taggert. Could these couples do a bit of a switcheroo come April? Divorce seems imminent between Jordan and Curtis, so once that hammer comes down, these new couples might get a little closer.

Ava will be getting more of these cryptic messages and while all arrows point to Ryan Chamberlain, with him being in a coma, she could feel as if she’s losing her mind! Could these messages be from an ex-lover that she’s not thinking of? Could they signal a return of a character?

The cryptic messages could somehow be coming from Ryan. He could be fooling everyone. Then there’s the chance that Ryan and Kevin have switched, and Kevin is the one in a coma. But what if these messages are coming from an ex that is long gone, and working his way back to Port Charles, like Morgan? Might even be an ex from Ava’s past that hasn’t been introduced to GH viewers?

Speaking of Morgan, his dad is doing okay, but many wish that Sonny was back in Port Charles and Carly’s arms. Looks like Nina and Sonny will get closer in April. Reeves will see a softer side of Corinthos and she may start to feel things she knows she shouldn’t be feeling. The two will spend more time together, and while in the back of her head she knows what she is doing is wrong, she might think of ways to reassure herself. After all, with his “dire” career choice, isn’t Sonny safer not knowing who he is? Could these two share a kiss in April? Could things progress faster in their romance where they hit the sheets?

With Nina gone, Jax’s focus will be on Joss and Carly. In fact, GH spoilers indicate that Jax will worry about his ex-wife and wish she could just sit on the sidelines. Jax has always had a soft spot for Ms. Corinthos, and now that Sonny is out of the picture, he might believe this is his time to turn into the main man in her life.