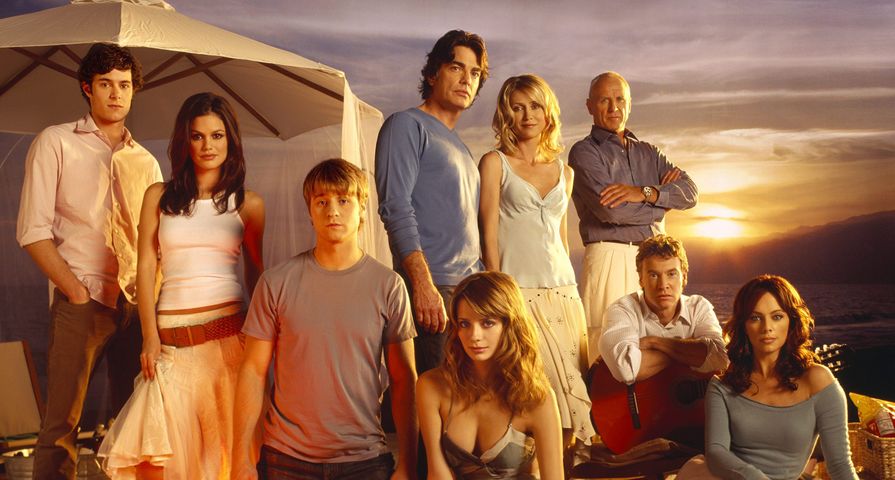 Fox’s The O.C. ran from 2003 to 2007 and was created by Josh Schwartz. The show followed a group of teenage friends growing up in Newport Beach in Orange County, California, as they experimented with love, loss, and lust. The series starts with Ryan Atwood, a troubled teen from Chino who moves in with the wealthy Cohen family. He becomes fast friends with Seth Cohen and falls for his neighbor, the adorable Marissa Cooper. The show was known for its drama, risky plots, and romantic teenage blunders. However, there were numerous desperate and tragic storylines that were cringe-worthy to say the least. While we wanted to turn it off and curse the writers…we stayed glued to the TV frantic for more. Here are 12 of The O.C.‘s worst storylines!

What teenager doesn’t spend a summer in France and come back married? After getting Ryan Atwood (Ben McKenzie) involved to secure a divorce from her French husband, Taylor (Autumn Reeser) goes after her rescuer. But there is one problem: these two have no chemistry and it was awkward and embarrassing to watch them kindle a romance fit for the schoolyard playground.

While Seth Cohen (Adam Brody) may be a cutie pie, there is no way this high school dork would have found himself being fought over by two beautiful women. The popular girl and socialite Summer Roberts (Rachel Bilson) would have started dating the captain of the football team instead of dressing up as Wonder Woman to compete with Anna (Samaire Armstrong) over socially awkward Seth.

We quickly gathered that Marissa (Mischa Barton) has issues from her shoplifting, her drug overdose in Mexico, and her strained relations with her parents; however, all of that didn’t help us understand why she developed feelings for mopey ol’ Johnny when she was still involved with Ryan.

Yes, she is a backstabbing gold digger and he is a rich aging playboy who pretends to be Hugh Hefner, but it all seems a little incestuous that Caleb Nichol (Alan Dale) marries a woman young who is old enough to be his daughter and coincidentally his daughter’s best friend. These two have no chemistry, and when producers realized their mistake, Caleb was killed off.

8. Julie and the Girls Live in a Trailer Park

One would think that Julie Cooper (Melinda Clarke) the interim CEO of the Newport Group, would have enough financial savviness to avoid ending up in the poor house. It’s also unbelievable that she was able to hide her new digs from Newport socialites. Of course it doesn’t last long and they’re living the high life again when Julie becomes engaged to Summer’s dad.

It’s a little farfetched that hot bartender Alex (Olivia Wilde) would lust after Seth Cohen (Adam Brody) in the first place. Seriously, how does this guy have so many attractive women pining over him? It’s a tough sell that after their breakup, Marissa Cooper (Mischa Barton) decides that she has the hots for Alex. This storyline was obviously a desperate grab for ratings.

Marissa Cooper (Mischa Barton) finally gets her life sorted out and graduates from high school. She is happy and planning to live with her dad for the year on a boat in Greece. Then she is killed when a drunken Kevin (Cam Gigandet) rams into her and Ryan’s car when they are headed to the airport. Why couldn’t the show’s creators just let Marissa be happy and go live on a boat in Greece? Hasn’t she been through enough?

Apparently marrying her best friend’s dad wasn’t enough, and now Julie Cooper (Melinda Clarke) is after her daughter’s best friend’s dad, Dr. Neil Roberts (Michael Nouri). It makes no sense at all that after Julie and Neil break up, Neil moves to Seattle while leaving Julie to live in his mansion with his daughter Summer (Rachel Bilson).

Fans knew that Ryan Atwood (Ben McKenzie) was not going to take Marissa’s death well, but cage fighting and living in storage closet in a bar is a little extreme. Watching the love of your young teenage life die in your arms is definitely intense, but descending into the seedy underbelly of illegal bar fighting….really?

It’s well known that Ryan Atwood (Ben McKenzie) has anger issues, especially while coping with the death of his on and off again girlfriend Marissa Cooper (Mischa Barton). However, no one bought the whole storyline where Julie (Melinda Clarke) tries to have Kevin Volchok (Cam Gigandet) killed for driving into Ryan’s car and fatally injuring Marissa. All fans know, that beneath Ryan’s bad boy exterior, he is not a murderer and what mother would ruin a teenager’s life by pressuring him to kill someone?

While hanging Chrismukkah decorations, Taylor Townsend (Autumn Reeser) and Ryan Atwood (Ben McKenzie) get knocked unconscious and have a dream where Ryan never came to Newport. This episode was painful to watch. It’s clear that writers are running out of ideas when they invent alternate universes.

This character is pure caricature. Julie (Melinda Clarke) meets Gordon Bullit (Gary Grubbs) through NewMatch, a dating website she started with Kirsten (Kelly Rowan). In season four, she leaves him for Frank Atwood (Kevin Sorbo), Ryan’s dad, but in the series finale she is pregnant with Frank’s baby while walking down the aisle with the Bullit. And then she decides to ditch both of them? The whole triangle is underwhelming and overplayed. Why would any woman want to be Mrs. Bullit or the wife of a lying ex-con who abandons his child?