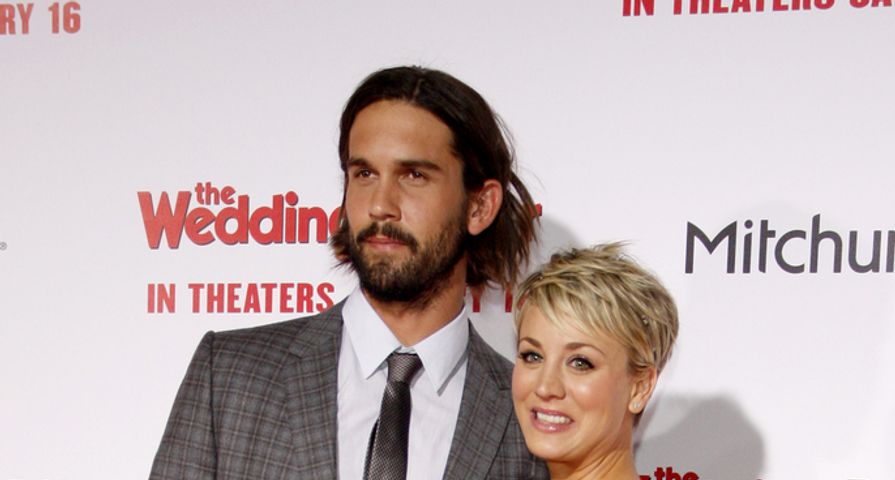 Now that Kaley Cuoco and Ryan Sweeting have announced that their marriage is over, we can’t help but think that we saw this coming from at least a mile away. These two barely knew each other when they first started dating, but they didn’t let that stop them from rushing down the aisle. We sure hope that she had enough sense to get a prenup because this could get messy. Here are 9 signs that Kaley and Ryan were headed for splitsville from day one!

9. They Moved in Together After One Date

Kaley and Ryan didn’t waste a lot of time. They moved in together the day after their first date. “He came to L.A. for a blind date – and he never left,” she told David Letterman. “We had been texting, we texted a little bit. Dinner was great, and then he moved in the next day. I know, it sounds so slutty, but it wasn’t! It all did move quite fast on paper, but we really did know…And I know you’re all thinking, ‘She’s nuts!’ I swear I’m not nuts. We just fell in love.” Sounds like they really rushed things!

8. They Were Married Within Six Months

After moving in together immediately after the first date, they were engaged in another three months and then married less than three months after that. Many people think that she was trying to stick it to Henry Cavill. They dated for a hot minute right before she met Ryan, but she reportedly dumped him because she wasn’t interested in the publicity. A week after the breakup, she was with Ryan and she suddenly had no problems with publicity.

7. They Moved into Khloe and Lamar’s Old Place

When Khloe Kardashian and Lamar Odom split and put their mansion in Tarzana on the market, Kaley and Ryan purchased it from them. Now that she and Ryan have split, many people are wondering if the house is cursed.

6. She Was The Money Maker

Kaley was definitely the money maker in this relationship. While they were together, she renegotiated her contract for the Big Bang Theory and went from earning $350,000 per episode to $1 million per episode. She is poised to make at least $90 million as a result of the deal.

5. He Didn’t Have A Very Successfull Career

Unlike his wife, Ryan didn’t have much of a career. He was a professional tennis player, but due to injuries, he hasn’t had much of a career in recent years. Since hooking up with Kaley, his only real discernable job has been looking after her many dogs, which probably wasn’t good for his self-esteem.

4. She (Allegedly) Had Him on an Allowance

Sources close to Kaley and Ryan claimed that she put him on an allowance. “Ryan has a credit card, which Kaley pays off each month,” an insider said. “Kaley goes through the bill with a fine-tooth comb, because there are certain things she won’t let Ryan spend her hard-earned money on… if he wants to sneak off to the bar with his guy friends, Ryan makes sure to do that on his own dime.” Sounds like money was a source of tension for these two!

3. Her Chemistry with Johnny Galecki

On The Big Bang Theory, Kaley and her ex Johnny Galecki have incredible chemistry. This chemistry can also be seen interviews. Fans can’t help but feel that Kaley and Johnny were meant to be and Ryan was just a distraction.

2. They Were (Allegedly) Fighting in Public

A year ago, it was reported that Kaley and Ryan were getting into these “knockout, drag out” fights. One of these fights reportedly occurred on Emmy night in 2014 at a HBO afterparty. “They were very angry – going back and forth at each other,” an eyewitness said. “Kaley was shaking her head, turning red. She looked like she was going to cry.” It didn’t end there. “Kaley – who’d been drinking rosé – whispered ‘Please don’t leave me’ to Ryan, then got up to go to the bathroom,” a fellow partygoer said. “After she walked away, Ryan put his finger to his head and pretended to shoot himself. Twice.” Yikes! Not much of a gentleman!

1. They’ve Been Miserable for Months

According to People magazine, Kaley and Ryan both “seemed miserable” during romantic nights out together before they announced their split. “The few times Kaley and Ryan were out together recently, the tension was noticeable,” the source said. “You could tell the honeymoon phase had ended. It seemed they were trying to work out their marriage by going on dates, but they both seemed miserable.”