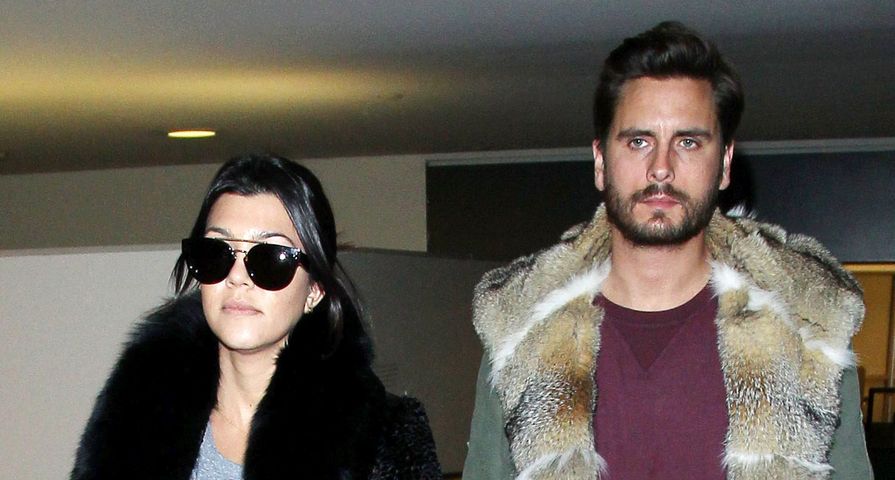 Scott Disick might be in a lot of trouble – that is if he and Kourtney Kardashian are still together. Something tells us, however, that this might not be the case. Scott and Kourtney have always had more of an on-again off-again thing happening. At the drop of a hat, they break up and they get back together a little while later. Even though their relationship has spanned almost a decade, it has been years since these two actually seemed happy together. We personally think that this is the end for them. Here are 8 signs that these two are already broken up!

8. Scott Canoodling with His Ex

Scott was recently spotted looking a little too cozy with his ex, Chloe Bartoli, in the South of France. There are photos of them sharing a lounge chair (as he caressed her swimsuit-clad body) and of her feeding him pasta (as he put his arm around her). Something tells us that this isn’t cheating, but signs that Kourtney and Scott are done and he is moving on.

Scott Disick got super-cozy Thursday with a fringe celebrity in romantic Monte Carlo. Scott was at the pool with Chloe Bartoli, getting very touchy. Bartoli is a celebrity stylist who has been linked to stars like Jared Leto. She also reportedly once dated Scott. As for Kourtney, last we saw she was at a gun range in the L.A. area. She Instagrammed the photo and captioned it, “Don’t mess.” Coincidence? Credit SplashNewsOnline #tmz #kourtneykardashian #scottdisick #kardashian

7. An Inappropriate Relationship with Kendall

Back in May, the tabloids were alleging that Scott was hooking up with Kourtney’s younger half-sister Kendall. While it is unlikely that Kendall would sleep with her sister’s baby daddy, it wouldn’t be too shocking if they maybe had an inappropriate flirtation and Kourtney then banned them from texting or hanging out one-on-one. Either that or she dumped the Lord altogether.

Father’s Day was just a couple of weeks ago and, interestingly, Kourtney did not give Scott, her boyfriend and the father of her three children, any sort of shout out. The day after Father’s Day, Scott was spotted out with his son Mason, but Kourtney, Penelope and Reign were not with them.

12 hours @Disneyland last week was not enough. #takemeback A photo posted by Kourtney Kardashian (@kourtneykardash) on Jun 23, 2015 at 1:45pm PDT

Interestingly, Scott wasn’t at North’s birthday party this year. The party took place on June 15. Kourtney showed up along with her three children, as did everyone else in the family. We think she and Scott were already broken up at this point, which would explain why he was MIA.

Scott has been to rehab at least twice. Each time, he’s bailed early. His most recent stint was in March. He left the facility in Cost Rica just five days after checking in and headed back to Los Angeles for some business commitments. He obviously isn’t committed enough to his health, which makes us think that Kourtney’s probably had enough by now.

Scott reportedly cheated on Kourtney this past June with a hot young 21-year-old he picked up while partying in New York City. Kourtney is said to be devastated about it because he told the young woman that he loved her, so she kicked him out.

We know that Scott used to use anti-anxiety medication and that he used to mix it with alcohol. We also know that he abuses alcohol. The tabloids also allege that the Lord is addicted to cocaine. We doubt Kourtney would put up with this not only in their relationship but with him as the father of their children.

Scott Disick is a regular on the Las Vegas party circuit. He’s reportedly been doing club appearances every other weekend at 10AK. Considering the problems that he has had with drinking, one would think he would have wised up by now and found a better way to make money that doesn’t include hanging around people drinking. Yet another sign that he and Kourtney are probably dunzo.