Things You Didn’t Know About ‘Angel’ 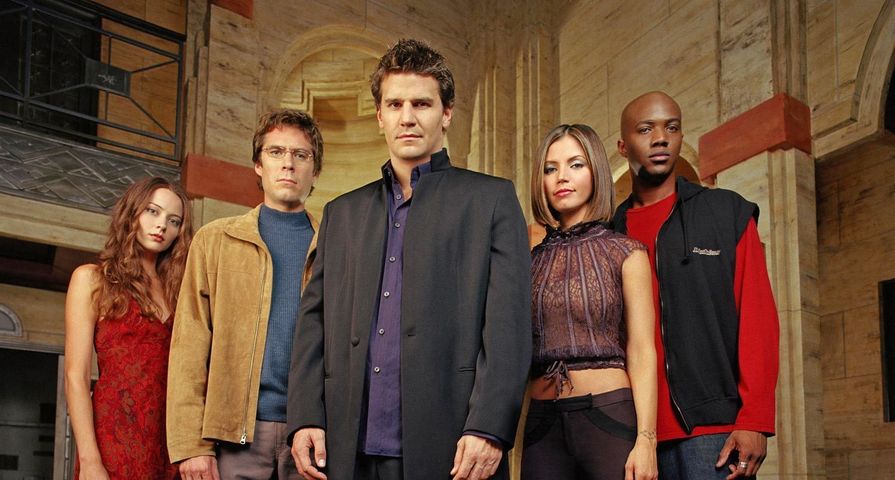 After the massive success of Buffy the Vampire Slayer, fans were ecstatic to be introduced to a new spin-off based on David Boreanaz’s Angel character. Once again The WB had a hit on its hands thanks to the great mind of Buffy creator Joss Whedon, who, along with David Greenwalt, gave fans Angel. The series ended up enjoying a successful yet somewhat short run of five seasons from 1999-2004 as Angel’s human soul is restored and he goes to Los Angeles to work as a private detective so that he can “help the helpless” as he is tortured with guilt and remorse of centuries of killing when he was a vampire. It has already been 12 years since Angel last aired, yet there are still many interesting facts not widely known about the show! Check out 10 things you didn’t know about Angel. 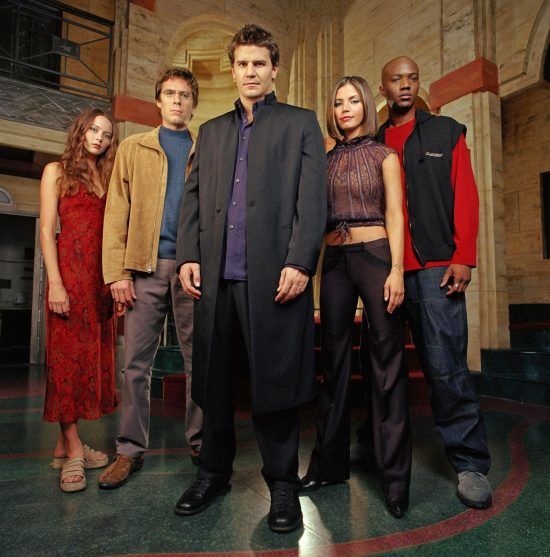 Originally, the character of Allen Doyle was not supposed to be Irish but after Glenn Quinn auditioned, they wrote the character for him. It was the first time Quinn didn’t have to hide his Irish accent for acting, although he occasionally had to re-record his dialogue because accent is so thick. 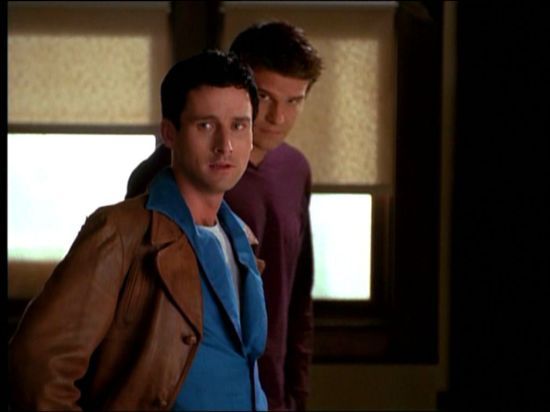 Charisma Carpenter’s time on Angel was strained by tension. Whedon explained to TV Guide after the show had ended that Carpenter’s character Cordelia Chase was slowly phased out because “the writers could think of nothing more for her to do.” Meanwhile they also chose to put her character in a coma for much of season 4 was because Carpenter was pregnant in real life. After her character was written out, Carpenter’s feelings were hurt and she was reluctant to come back for the 100th episode and only agreed on the condition her character would not die. After she signed the contract for the episode Whedon told her that Cordelia would in fact die in the episode, leaving a frayed relationship between Carpenter and Whedon for quite some time. 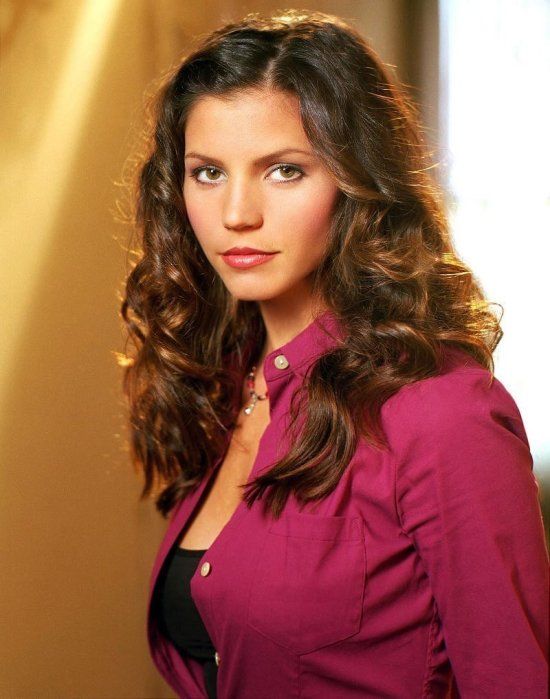 When the WB announced Angel‘s cancellation, many were angry and shocked because there seemed to be no reason behind it. At the time of the announcement, Angel was rated second only to the massive series Smallville among audiences in the 18-34 demographic. Not to mention that very same month the network’s weekly ratings release showed that Angel had earned “outstanding year-to-year gains” among demographic groups. As a result fan reaction was fast and fierce with letter-writing campaigns, online petitions and lobbies for other networks to pick it up. 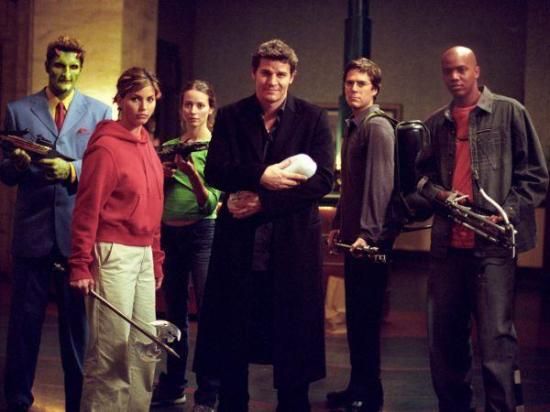 After the furious reaction by fans, head writer David Fury suggested that the show would never had been cancelled if Joss Whedon had not gone to the network requesting an early renewal for season six of Angel. “The only reason Angel didn’t come back… it’s a very simple thing. Because our ratings were up, because of our critical attention, Joss specifically asked Jordan Levin, who was the head of The WB at the time, to give us an early pick-up because every year they would wait so long to give Angle a pick-up and a lot of us would turn down jobs hoping that Angel would continue and Joss didn’t want that to happen […] and Jordan sort of with his hands tied, with his back up against the wall, called him the next day and said. ‘Okay we’re cancelling you.’ […] I guarantee that, if we waited as we normally did, by the time May had come around they would have picked up Angel. I can guarantee that.” 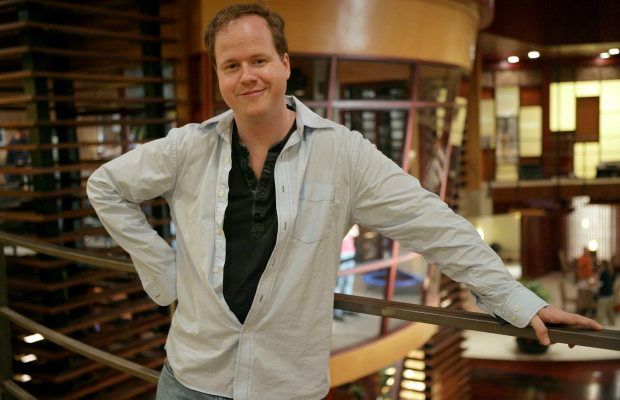 In the episode “Through the Looking Glass,” Joss Whedon went to great lengths to hide the fact that he was making a cameo in the show as Numfar, the dancing demon. The only ones that knew about the cameo were David Greenwalt, Tim Minear, David Boreanaz and the makeup artists. 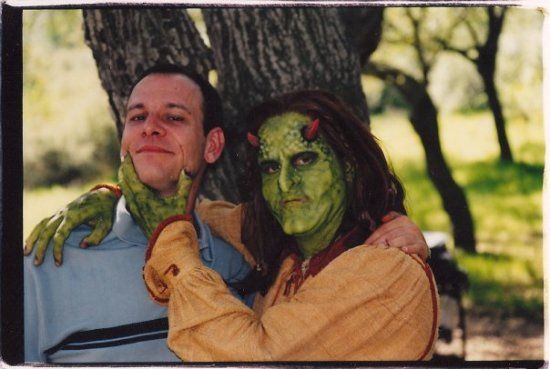 Although Angel would of course be tied to Buffy as a spin-off series, Whedon wanted to make it clear it was not the same as Buffy. When comparing the two show’s, Whedon stated that Angel is “a little bit more straightforward action show and a little bit more of a guys’ show.” He explained, “We wanted a much darker show, darker in tone. It’s set in Los Angeles because there are a lot of demons in L.A. and a wealth of stories to be told. We also wanted to take the show a little older and have the characters deal with demons in a much different way. Buffy is always the underdog trying to save the world, but Angel is looking for redemption. It’s those two things that creatively make the shows different.” 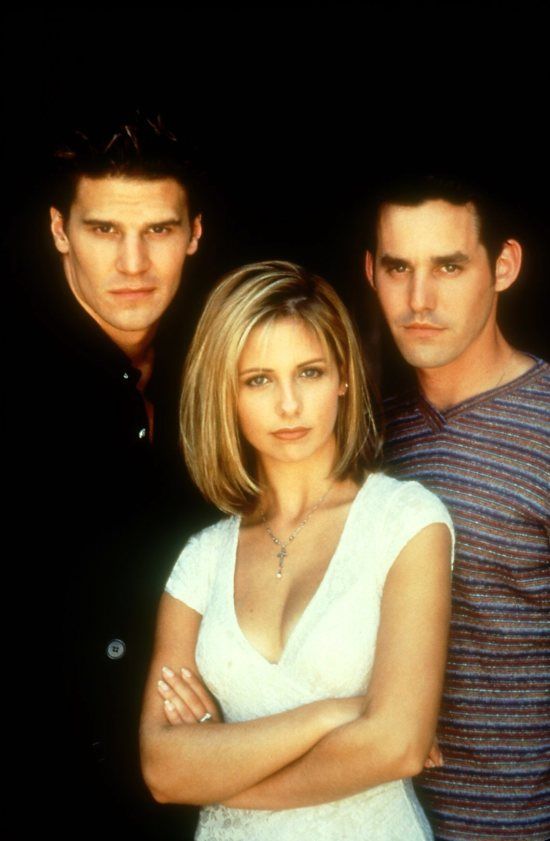 Through the course of Angel, a total of 18 actors from Buffy the Vampire Slayer reprised their role on Angel in some capacity; however no character that originated from Angel ever appeared on Buffy during the five years that they ran at the same time. 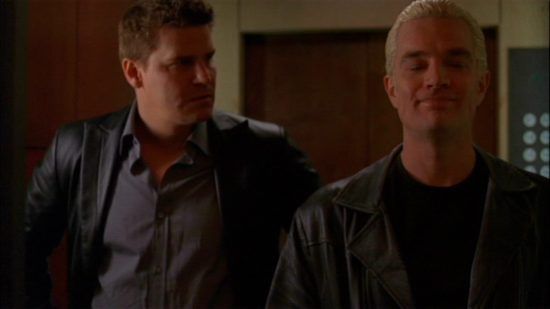 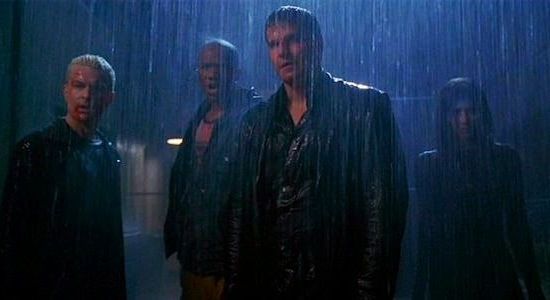 Fan Fiction has become a successful genre all of its own for many different franchises, but one Buffy and Angel fan had it really pay off for her! Mere Smith wrote tons of fan fiction before finally submitting a script to Joss Whedon for Angel which he ended up using for the episode “Untouched.” He liked the script and episode so much, Smith went on to write 11 episodes for the show and has become a professional screenwriter and producer thanks to her fan fiction start. 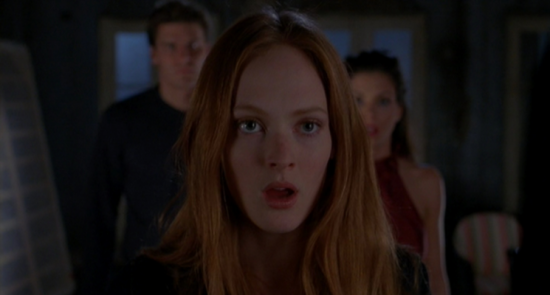