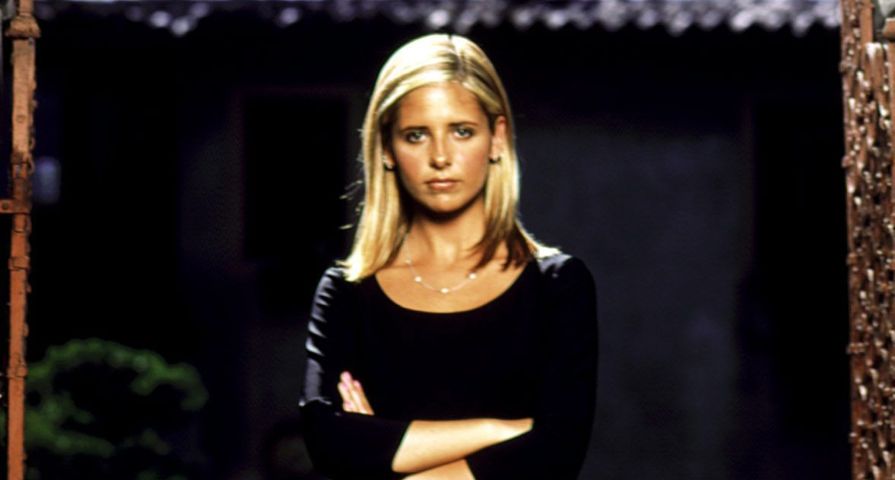 Buffy the Vampire Slayer was the little show that could. Based on a relatively unsuccessful movie and airing on a minor network (The WB), it was a big hit in the late ‘90s and early 2000s with teens and critics. It put The WB on the map and the writing was so good that older viewers loved the show as well. It was also highly innovative and influential on pop culture – so here are 10 things we probably wouldn’t have today if it weren’t for seven seasons of this game-changing series.

Wait a second, you might be saying. There were only seven seasons of Buffy. And you’d be absolutely right. But in 2007, creator Joss Whedon produced the comic book series Buffy the Vampire Slayer Season 8, which essentially served as a storyline for what could have been the next season of the show. It takes place a year after the events of the series’ final episode, with Buffy leading a massive team of slayers worldwide. Like in every season, this one has a “big bad,” a masked evil-doer named, surely not coincidentally, Twilight. You’ll find all your favourite “Scoobies” (the series’ main gang of good guys and gals) the same witty dialogue, and the same kinds of exhilarating plot twists you enjoyed on the TV show. And many of the comics are written by either Whedon himself or some of the series’ best writers. It was followed by a comic series of the ninth season as well.

Buffy wasn’t the first show to feature a musical episode – Ally McBeal, for example, did it the year before – but they did it so well that it opened the floodgates for a number of other shows. The season sixth episode, “Once More, with Feeling,” brilliantly worked the musical concept into the episode’s plot and the series’ supernatural theme. A demon forces the gang to occasionally burst into song and reveal hidden truths about themselves to their friends and lovers. And all the song and dance numbers retain the wit, humor and sincerity fans expect from the show. Since “Once More, with Feeling” aired, other shows have had a go at a musical episode, to various degrees of success including How I Met Your Mother, Community, Scrubs, Grey’s Anatomy and, particularly poorly by most accounts, 7th Heaven.

Sure, vampires have been a huge part of popular culture since Bram Stoker’s Dracula was published in 1897. But Buffy, along with the film version of Interview with the Vampire, helped spark a renaissance of sorts for our fine fanged friends. Angel’s totally emo vamp personality could be seen as a direct ancestor of Twilight’s Edward Cullen or True Blood’s Bill Compton: vampires with hearts of gold. And then there’s Buffy’s Spike and True Blood’s Eric – they’re practically the same guy: tall, lanky blondes who revel in all the darkness of the vamp lifestyle, but eventually find their cold blood warms when they fall for the show’s mortal, blonde heroine.

7. Any Reason to Revisit The Movie

When the movie came out back in 1992, it didn’t exactly take the world by storm. Little girls weren’t going out for Halloween with cheerleader outfits and wooden stakes. In fact, people just didn’t know what to make of it. There’s a whole lot of Dylan from 90210 with his bangs combed down and is that Pee-wee Herman with fangs and an Albert Einstein wig? Truthfully, Whedon wasn’t entirely happy with the direction that was taken with his script. But you know what? The movie isn’t half bad. You can see the groundwork being laid for Whedon’s signature style and Kristy Swanson’s take on the title character works, too. She’s no Sarah Michelle Gellar, but it works. And, yes, that is Pee-wee’s Paul Reubens, and his (spoiler alert!) death scene alone is worth the price of admission. Yet a lot of people wouldn’t have known any of this if not for the subsequent TV show.

6. Alias, Orphan Black, Terminator: The Sarah Connor Chronicles, and the list goes on.

On Alias, Sydney Bristow was an intelligent, butt-kicking leader who had faced a lot of adversity in her life. On Terminator: The Sarah Connor Chronicles, Sarah Connor is an intelligent, butt-kicking woman destined to save humanity. Does that all sound familiar? Sure, Sarah Connor was a film character long before Buffy was created, but she might not have been viable as a main character on a TV show without Ms. Summers. On Orphan Black, we have a number of characters all played by Tatiana Maslany, and when you put them all together, you have something rather Buffy-esque. Really, any show with a complex, butt-kicking heroine that came after Buffy owes its life to Buffy.

We’ve already shown you how many series owe a lot to Buffy the Vampire Slayer. But no show owes more to that one than Veronica Mars. Yes, it was a brilliant show in its own right, but in many ways it was like a “real world” (i.e. a world free of vampires and demons and other supernatural annoyances) version of Buffy. Veronica, like Buffy was a blonde outsider, super-smart with a unique way with words. Plus, she knew how to put away the baddies. Veronica, like Buffy, had two fiercely loyal friends; she had a close male friend and a nerdy girl friend. Veronica, like Buffy, lived in a single-parent household and had a thing for bad boys.

Marvel’s cinematic universe was doing just fine before Whedon took to the writing and directing chairs on The Avengers, but his unique Whedon-ness took it to another level. One of the amazing things about Buffy is how Whedon brought together characters who you wouldn’t think belonged together and made them inseparable: a cheerleader, a shy nerdy girl and an awkward, wise-cracking skateboarding dude. That experience turned out to be the backbone of his take on The Avengers. Whedon said of this particular superhero team, “Ultimately these people don’t belong together and the whole movie is about finding yourself from community and finding that you not only belong together, but you need each other, very much.“ Not only did he add that emotional and psychological backbone, but also that trademark Whedon wit.

Whedon proved with Buffy that you could take huge chances with your storytelling, from techniques to major plot points and storylines — to make it work. We’ve since seen that kind of bold creativity in a number of shows, but you could argue nobody did it better than Whedon. Similar to the musical episode, Whedon integrated an unusual concept as a device to move the overall narrative forward in “Hush,” a mostly silent episode that was ironically the only episode of the show whose screenwriting was nominated for an Emmy Award. He also took a big chance with a very dramatic episode in which Buffy’s mom was killed. And, of course, there was Dawn, the cute little sister who appeared out of nowhere at the beginning of the fifth season. It satirized the TV trope of bringing in a cute kid for no reason to boost ratings, but Dawn became a key (literally) part of the show.

Before she landed the title role of Buffy Summers, Gellar was best known – and barely known at that – as the star of a short-lived teen soap called Swans Crossing and for a short run on All My Children. But her take on Buffy made her a legit, bankable, name-at-the-top-of-the-poster movie star. And it was truly well deserved. Buffy was an amazingly complicated character: self-doubting, yet confident, funny, an outsider and a leader with intense passion, a lover and a fighter (sometimes the latter two at the same time). It was an intensely physical role as well as an emotional one. Despite all this complexity, Gellar made the audience love and root for Buffy, and truly understand the difficulty of being her generation’s chosen one: the Slayer.

Series creator Joss Whedon started out as a staff writer on Roseanne, but not long after he wrote the original feature film Buffy the Vampire Slayer — the rest is history. Despite the film’s lack of box-office success, The WB network gave him a shot at a series version and the success of that spawned a series of Whedon-helmed shows with similar sensibilities now collectively known as the Whedonverse. First, Angel spun off from Buffy. Then came the space-western Firefly and finally another strongly female-fronted series, Dollhouse. Not to mention his wacky musical-comedy web series, Dr. Horrible’s Sing-Along Blog, which he worked on to fill his time during the writers’ strike. And it’s all distinguished by that trademark Whedon alchemy of strong female characters, a group of outsiders working together with a unique dialogue filled with pop culture references and terminology nobody had ever heard before, plus a narrative fearlessness.