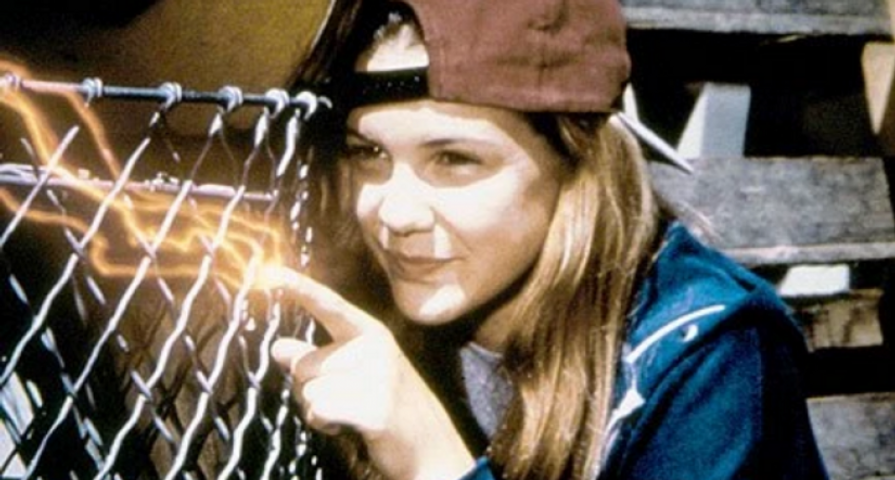 The Secret World of Alex Mack was a huge hit on Nickelodeon. Running from October 8, 1994 to January 15, 1998, the show centered around Alex Mack, an otherwise ordinary kid in junior high whose life completely changes when she is drenched in a mysterious chemical that gives her the ability to morph into liquid and shoot electricity from her fingertips. It’s been almost 20 years since the show went off the air, so check out these 9 things you didn’t know about the Secret World of Alex Mack:

Thomas W. Lynch co-wrote the pilot script for the show with Ken Lipman. His father had been a nuclear physicist who worked with radioactive materials that he kept in the family garage. “Today, they would’ve shut the whole block down,” Lynch told The Huffington Post. “It cracked me up — the idea that that stuff was right there. What if I ate it? What would happen to me?” While the chemical that gave Alex her powers, GC-161, was not of the chemicals he found in the family garage. Lynch thinks that he came up with the GC part of the name while doing DNA research, and the 161 came his parent’s divorce. “I was 8 years old when my parents got divorced,” he said. “That was purposeful.”

8. Selling the Idea to Nickelodeon

Selling the show to Nickelodeon was easy for Thomas W. Lynch and Ken Lipman. Lynch had television hits like Kid’s Incorporated and Night Tracks on his resume, which is why Nickelodeon came to him about doing a series. He convinced the network to let him develop six scripts, but the only one that he ended up writing was The Secret World of Alex Mack.

7. Alex Mack Was Supposed To Be a Boy

The character Alex Mack was initially going to be a boy, but the network insisted it that the character be a girl. “I think the success of it laid in the fact that I didn’t write a gender, I wrote a character. Myself and Ken Lipman, who co-wrote the pilot with me, we didn’t change it to be a girl, we just had a character,” creator Thomas W. Lynch told The Huffington Post.

More than 300 girls auditioned for the role of Alex Mack. One of the things that set Larisa Oleynik apart from the others was her “natural instinct.” “Larisa had such a great natural instinct. It was stunning. She made the character richer and more shaded,” Thomas H. Lynch told The L.A. Times. According to him, they weren’t looking for someone who “looked like she worked too much in television, had the kinds of reactions you always see, the smile, the look, the acting with eyes and all that kind of thing.”

Source: Not Another Aiden

Larisa Oleynik was offered a fifth season, a feature film starring her character and a “ton of money,” but she was ready to move on. “I have absolutely no regrets about that,” she told The Huffington Post. It was an incredible thing he was offering me and I knew that at the time, but I was a little burnt out. This has nothing to do with anyone involved, or the show or with Nickelodeon, but I don’t think that I will ever work that hard. I don’t think that any job will ever feel as hard because I put so much pressure on myself to be so good at everything.” Oleynik wanted to finish out her high school career and head to college, and she wanted to leave Alex Mack with some innocence. “For me, she was starting to grow up and that last season, she gets a boyfriend … I don’t know, there was something about it and I just kind of wanted to keep it innocent,” she said. “I think that we had four incredible seasons and I’m so proud of them.”

Jessica Alba’s television debut was on The Secret World of Alex Mack. She appeared in the first season as the girlfriend of Alex’s crush, Scott Greene, who antagonized Alex. When she left the series to co-star in the TV reboot of Flipper, Scott got himself a new girlfriend, Kelly, who was equally as mean.

Between 1995 to 1998, 34 books about Alex Mack were published concurrently with the show. The first and last books, which were novelizations of the first and last episodes, were the only ones that didn’t have original stories. The books all ranged in length from 130 to 180 pages with most of them being written by Diana G. Gallagher, a veteran author of books based on TV shows.

It was costume designer’s Laura Slakey’s idea to have Alex Mack wear hats. She was inspired by the way her father dressed in the ‘60s. Since Alex was an outcast, she imagined that she would dress differently. Much of the character’s clothing came from thrift stores, but some people behind the scenes were not okay with the hats and thrift store clothing. “Tommy had to fight to keep her in the hats especially,” Slakey told HuffPost TV in an email. “Then the fans went nuts for her clothes, especially the hats, so the network realized it was part of what people loved about the show.”

There was some minor controversy about a scene in the pilot of the series where Alex transforms into liquid and then reforms as a human – but with no clothes! The scene was featured in every season one intro sequence, but then it was changed, probably because 12-year old star Larisa Oleynik was uncomfortable with it. “I remember being mortified! I was just really embarrassed, being that I was 12 or 13 or whatever. I had this towel wrapped around me or something and was behind some boxes. I was so, so embarrassed. They did then end up changing that … which was a good thing,” Oleynik said.