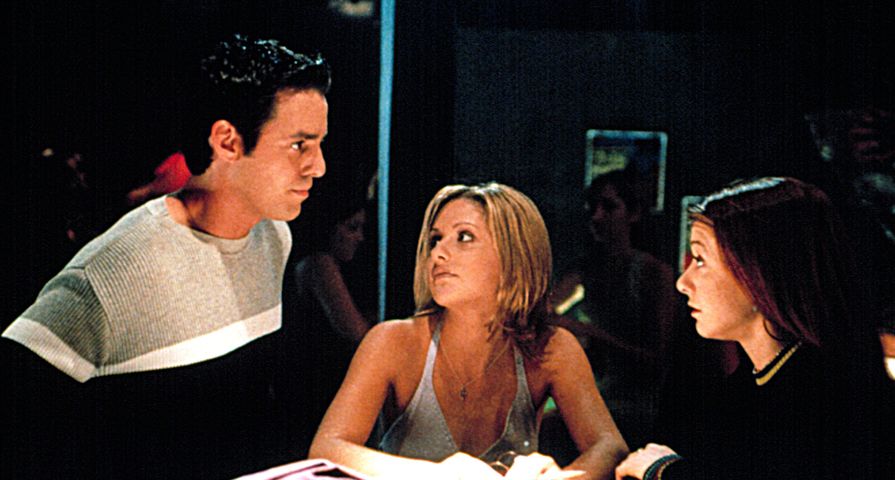 Buffy the Vampire Slayer was a unique show that became a pop culture sensation during its seven seasons on the air. It was never very realistic, of course, with the entire show dealing with vampires, vampire slayers, witches, and other magical/supernatural phenomena, but at some points, the plot went from creatively strange and unique to just plain ridiculous. Here are a few examples of when the strangeness of Buffy went a bit too far.

11. When Beer Turns Buffy Into A Neanderthal

In the bizarre episode “Beer Bad”, Buffy drinks beer that has been altered somehow and it turns her into a Neanderthal. The owner of a pub was altering the beer in order to get revenge on the college kids who had been treating him poorly for decades. The whole episode is about Buffy trying to drink away her problems after being dumped by a guy right after she slept with him for the first time. It was a bad way to cope, as it didn’t resolve anything, and then the episode was just a strange series of events after the drinking began. Ironically, this episode was nominated for an Emmy (…for hair styling).

10. When Buffy And Faith Switch Bodies

What’s a supernatural show without a little body switching? Seeing Buffy and Faith switch bodies was definitely amusing, but it was not exactly crucial for the plot. The series of events surrounding the body switch is convoluted, ridiculous, and unnecessary. After Faith wakes up from her coma and switches bodies through some kind of device from the Mayor, there are abductions, makeovers, some high jinks, some hurt feelings, as well as Faith sleeping with Buffy’s boyfriend in Buffy’s body, and more. Finally people figure it all out and switch them back. In the end, Faith escapes and leaves town.

In the episode entitled “Band Candy,” Principal Snyder hands out cursed candy to the students to sell that will pay for new uniforms for the marching band. Buffy sells her candy to her mother and to Giles, and both of them then start acting very strangely. Later, they discover that the town is filled with adults who are acting like teenagers because of the candy they consumed. They proceed to drink, smoke, steal, hook up with each other, and act very irresponsibly. This episode’s take on what teenagers act like is a bit strange, since it’s a show about teenagers who are often quite responsible considering that they have the weight of the world on their shoulders. Seeing the adults in the show act in this way is just bizarre.

Anya is an incredibly strange character. She provides some great comic relief at times when she doesn’t understand things about being human in the modern world, since she spent a thousand years of her life as a demon. She had been human originally, but after seeking magical revenge on a few ex-lovers for their misdeeds, a demon named D’Hoffryn turns her into a vengeance demon whose job was to grant wishes to women who had been wronged by men. Shortly after she is introduced on the show, when she appears to grant a wish to Cordelia after her boyfriend Xander gets caught kissing Willow, Anya becomes human. Interestingly, she ends up with the man she was there to seek revenge on, Xander. Their relationship is far from ideal though, and actually leads to her becoming a vengeance demon again after he leaves her at the alter. Everything about Anya, her back story, and her role on the show is quite strange.

When Joss Whedon decided to do a musical episode of Buffy, it baffled many fans, and delighted many others. In order to justify having the characters sing throughout the episode entitled, “Once More, with Feeling,” in season six, they introduce a demon that curses them and makes them sing the truth and divulge their deepest secrets. All actors did their own vocals, which added to the amusement level of this episode. Throughout the episode, the characters reveal their secrets to each other, with the most shocking of which being when Buffy reveals that when Willow brought her back to life, she had pulled her out of heaven. It was a major moment for the show, and it was more than a little strange that it was done through song.

6. When People Turn Into Their Halloween Costumes

The Halloween episode of season six involved a costume shop that turns people into the costumes people wear. Principal Snyder coerces Buffy and the gang into chaperoning children while they trick-or-treat. They have to dress up, so they go buy costumes. Then they all turn into the things they are dressed as. Willow is a ghost, (dressed in the skimpy outfit Buffy convinced her to wear, but that she later covered with the ghost costume), Xander is a soldier, and Buffy dressed as an 18th century girl, in an attempt to appeal more to Angel. In the end, Willow gains confidence, choosing to strut around in her skimpy costume, and Buffy realizes that she doesn’t have to pretend to be someone she’s not. None of this was very groundbreaking material in terms of the plot of the series.

5. Everything Related To Warren Mears

Warren Mears appears in season five and everything he does is so ridiculous that several things relating to him appear separately in this list. We first see him when he builds a sex robot who wanders Sunnydale looking for him. He built her, used her, and then when he met a real girl, he left his robot girlfriend to “die” (have her batteries run out). Then, he builds the Buffybot, a replica of Buffy, for Spike to use as a sex toy. That’s all incredibly disturbing, but that’s only the beginning. In season six, Warren comes back as part of a magical trio of geniuses who constantly complicate things for Buffy and the gang. Things go from weird to criminal quickly, when he tries to rape a girl and then kills her. He also nearly convinces Buffy that she is crazy and has imagined her entire existence as the slayer. He tries to beat Buffy many times, and eventually tries to kill her, but ends up shooting and killing Tara. Willow then seeks revenge, finds out that Tara wasn’t the first person he killed, and she flays him alive.

When Dawn suddenly appears as Buffy’s younger sister in episode one of season five, everyone on the show acts as though everything is normal, but viewers are incredibly confused. Most people were left wondering if they had somehow missed an episode that explained what was going on. Buffy and the gang, however, carry on as though Dawn has always been Buffy’s sister, and nothing has changed. Eventually, we discover that she’s a mystical object called The Key that has been turned into a human form and sent to Buffy for protection. Part of the whole scheme involves altering everyone’s memories so that they don’t notice that everyone has changed. It’s not often that a show adds a new sibling to the main character’s family while acting as though they have been there for the entire series.

3. The Ghosts That Make People Want To Have Sex

It was weird enough that Buffy and Riley have sex for almost an entire episode, but the reason behind it is even stranger. There was a building that had formerly been a home for troubled children and it had been run by a horrible, abusive woman who was always trying to keep the children in the home from having any “temptation.” For some reason, that building was later haunted by the ghosts of the children who released their pent up sexual energy and made the people who touched the walls of the building want to have sex. Doesn’t quite make sense, right? The logic behind this haunting is more than a little flawed, and the entire concept is more than a little creepy.

2. When We Wondered If Buffy Was Just Crazy

An episode in season six makes viewers question their sanity when Buffy starts to question her sanity. Warren and the rest of the trio summon a demon who has hallucinogenic venom that makes Buffy envision herself in an insane asylum. There, doctors and her family members try to convince her that her life as the Slayer is an elaborate hallucination that she had while in a coma for six years. The entire show goes back and forth between the two realities, and Buffy and the viewers start to wonder what is more likely, that she is a Slayer who hunts vampires in a world filled with magic and other supernatural creatures, or that Buffy is just a normal girl who has invented this unlikely world in her head. The weirdest part of the episode is that it makes the viewers doubt the entire six seasons of the show. Buffy chooses the reality where things are more normal and her parents are both alive, but later has a change of heart, trusts in herself and chooses her slayer life.

The Buffybot is the name given to a robot that looks exactly like Buffy. It was built by Warren Mears for Spike to use as a weird and incredibly creepy sex toy. She is programmed to be in love with him and do anything to please him. Eventually, the robot ends up with Willow, who keeps it to study it. Later, the Buffybot is reactivated to use in a fight against Glory, trying to make her think that the slayer was actually a robot, not a human. Later on, after Buffy dies, the Buffybot is used to patrol so that all of the supernatural beings don’t find out that she is dead. She is also used to impersonate Buffy in order to give Dawn a legal guardian, since Dawn’s mom and sister are both dead. Eventually, this Buffybot is destroyed. It was a fairly creative way to have Buffy on the show even when she was dead, but it was all a bit over the top and strange.