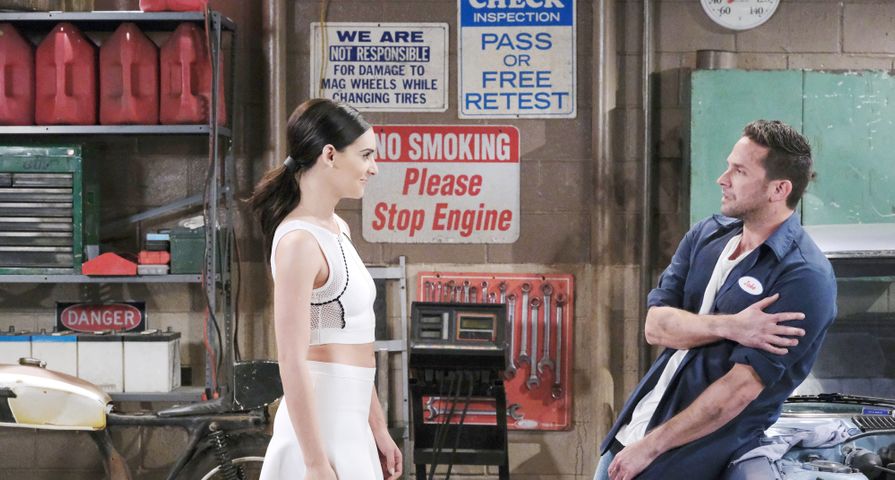 There weren’t any dull moments today on The Young and the Restless, Days of Our Lives, General Hospital and The Bold and the Beautiful! Find out what happened with our recap for May 28, 2020:

Thursday on Y&R, Sheila made a surprise appearance during Lauren and Michael’s honeymoon while John (Jerry Douglas) learned the truth about Gloria’s (Judith Chapman) past. The episode originally aired on December 15, 2005.

Eli and Lani received shocking news on Thursday on DOOL while Ciara helped Ben out of another dangerous situation. Also, Justin visited Adrienne’s grave to ask her permission to marry Kayla, and Jake pushed Gabi away.

GH’s Thursday episode originally aired on May 1, 2015. Brad proposed to Lucas, and the truth about Ric and Hayden’s connection was revealed. Musical performances include the original number “Welcome to the Nurses Ball” performed by Epiphany Johnson, Elizabeth Webber, Sabrina Santiago and Felix Dubois, “99 Red Balloons” by Nena, performed Dr. Liesl Obrecht, and “Marry You” by Bruno Mars, performed by Brad Cooper.

On Thursday on B&B, intern and aspiring fashion designer Beverly (played by Gina Rodriguez in her first role) stood her ground when Forrester Creations designer Amber (Frantz) issued her a “friendly warning” to stay away from Rick (Jacob Young). In Cabo, Steffy urged Thomas (then played by Adam Gregory) to commit to Hope (then played by Kim Matula) while trying to keep Liam from finding out that Hope was staying at the same resort. The episode originally aired on December 28, 2011.

Calling all Days of Our Lives (DOOL) fans! The last week of May should prove to be just as exciting as the rest of the month has been! So, what will roll down the pipe in the coming days? A beloved character leaves the little town while another super couple gets engaged. Also, someone will get shot! Learn about these storylines and others in the DOOL spoilers for the week of May 25, 2020.

DOOL fans have been expecting this for a while, as spoilers have indicated that actress Kate Mansi would be exiting the show “sometime” in May. According to Days teasers, Abby will sadly say goodbye to family, as she sets off for some treatment for her hallucinations to a facility in Florida.

As per DOOL spoilers, Marlena and Steve will meet with Orpheus this week in an attempt to save John. Meanwhile, Rafe and Hope will be frantically looking for David. When all is said and done, it seems as if John and David will be rescued, but not without some drama to unravel along the way.

There are some hints that David and John will be found this week, and eventually rescued. DOOL spoilers indicate that Justin will confront Orpheus on Tuesday’s episode, and lash out at him (most likely about Adrienne’s accident), which certainly gives an indication that Orpheus will be in a position where Justin can do this. Kiriakis isn’t exactly a spy or a cop, therefore, Orpheus will most likely be captured.

With that said, added teasers indicate that Orpheus will have a final trick to swerve John and Marlena with, so fans should expect some drama as the heroes try to save John and David. One last spoiler around rescue efforts, Rafe will get shot at some point … but the bigger question around all this is who will be holding the gun?

DOOL spoilers hint that Eric will get down on one knee this week and propose to Nicole! She’ll probably say yes without hesitation; however, May Sweeps teasers relay that while these two may get engaged, a wedding doesn’t seem in the cards for the couple. In other news related to Nicole this week, she’ll offer Abe a warning when it comes to hiring Kate Roberts.

5. Wedding Bells Are In The Air

Seems as if Eric and Nicole won’t be the only super couple *thinking* about tying the knot, as DOOL spoilers imply the Eli will pop the big question to Lani in the coming days. Added teasers for the show also suggest that the twosome will get some unexpected news. Love is clearly in the air, as WilSon will also share a romantic date this week.

4. Marriage On The Mind

One more DOOL character that will have marriage on the mind this week is Justin. After he rips into Orpheus, he’ll head to Adrienne’s grave for a visit, and it might prove to be quite the emotional scene as he’ll ask for permission to marry Kayla. In other related teasers, Justin and Sonny will also have a heart-to-heart while visiting Adrienne this week. Could Justin ask Sonny if he’s “okay” with him proposing to Kayla?

3. Steve On The Horizon

Meanwhile, as Kiriakis gears up to get down on one knee, Steve will have an epiphany. DOOL spoilers tease that he’ll prepare to tell Kayla that he wants to be with her, but will Justin pop his question before Patch has a chance to tell his Sweetness how he feels?

According to DOOL spoilers, Ciara will start planning her wedding this coming week, and as it seems, she will have a big question for Julie. As the days go by, Ciara will find herself helping fiancé Ben out of yet another dire situation. What could happen now, and does this have to do with Jake?

Speaking of Jake, he’ll continue to push Gabi away this week. Meanwhile, Gabi will have her hands full as it is when Jack rips into her in the coming days. Over at the Kiriakis mansion, Brady will get confronted by Xander, who isn’t too happy about what he’s pulled as of late. Last but not least, John will confront Victor on the entire baby switch fiasco, and how it affected Brady.