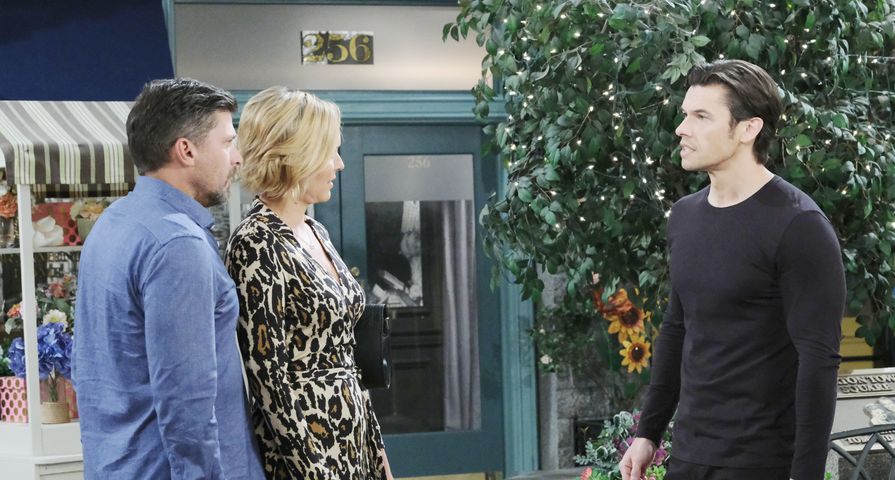 It was a dramatic week on The Young and the Restless, Days of Our Lives, General Hospital and The Bold and the Beautiful! Find out what you missed with your spoilers recap for May 25 to May 29, 2020:

Monday’s Y&R episode originally aired on October 7, 1991. What happened? The walls closed in on the nefarious David Kimble (Michael Corbett); Traci kept a secret from Brad (Don Diamont); and Nina (Tricia Cast) came out of hiding.

Steve and Marlena met with Orpheus to save John on Monday on DOOL while Hope and Rafe desperately searched for David. Also, Eric asked Nicole to marry him, and Nicole warned Abe he’s making a mistake by hiring Kate.

The original air date for GH’s Monday episode was May 18, 2014. The Nurses Ball kicked off with an unexpected interruption during the opening number and included a surprise proposal! Musical performances include the original number “Welcome to the Nurses Ball” performed by Epiphany Johnson, Elizabeth Webber, Sabrina Santiago and Felix Dubois with a special performance of “Willkommen” from Cabaret by Dr. Liesl Obrecht.

Rafe was shot on Tuesday on DOOL while Orpheus had one last trick up his sleeve for Marlena and John. Also, Justin angrily confronted Orpheus, and Will and Sonny shared a romantic night.

GH’s Tuesday episode was from May 9, 2014. Luke and Tracy took the next step in their relationship. Spencer convinced Nikolas they had to attend the Ball. Musical performances included “Raise Your Glass” by Pink, performed by Kiki Jerome, Elizabeth Webber, Lucas Jones, TJ Ashford and Felix Dubois; “You Took the Words Right Out of my Mouth” by Meat Loaf, performed by Eddie Maine; “I Am What I Am” by Jerry Herman, performed by Luke Spencer; a striptease to AC/DC ‘s “You Shook Me All Night Long” was performed by Magic Milo & the Magic Wands (Nathan West, Lucas Jones, Felix DuBois, Michael Corinthos and TJ Ashford).

Wednesday on Y&R, the episode from October 10, 2003 aired. Kevin’s revenge plot took a dangerous turn while Nikki and Sharon fought for the spotlight at the Newman Ranch.

Jack laid into Gabi on Wednesday’s episode of DOOL while Eli proposed to Lani. Also, Ciara asked Julie an important question, and Abigail shared a heartfelt goodbye with her family as she left for Florida.

GH’s Wednesday episode’s original air date was May 12, 2014. Spencer begged for another chance with Emma. Britt told Nikolas she still loves him. Scott told Lucy she made a mistake picking Kevin.

Musical performances include “Brokenhearted” by Karmin, performed by Brad Cooper; “I Love It” by Icona Pop, performed by The Haunted Starlets (Sam Morgan, Maxie Jones, Molly Lansing, Lulu Spencer-Falconeri and Kiki Jerome); and the original song performance “Criminal Love” by Eddie Gomez, among others.

Wednesday on B&B, Stephanie was angry with Ann (Betty White) when she found out she wasn’t looking for her own house. Ann admitted she wants to stay in the Forrester guest house because she wants to be a part of the family. Stephanie was upset and wanted to send her back to Chicago, but Eric refused. Pam gave Eric the comfort that Stephanie denies him, leading Ann to believe that Eric’s relationship with Pam is the reason he wants them to stay in Los Angeles. The episode originally aired on February 27, 2007.

Thursday on Y&R, Sheila made a surprise appearance during Lauren and Michael’s honeymoon while John (Jerry Douglas) learned the truth about Gloria’s (Judith Chapman) past. The episode originally aired on December 15, 2005.

Eli and Lani received shocking news on Thursday on DOOL while Ciara helped Ben out of another dangerous situation. Also, Justin visited Adrienne’s grave to ask her permission to marry Kayla, and Jake pushed Gabi away.

GH’s Thursday episode originally aired on May 1, 2015. Brad proposed to Lucas, and the truth about Ric and Hayden’s connection was revealed. Musical performances include the original number “Welcome to the Nurses Ball” performed by Epiphany Johnson, Elizabeth Webber, Sabrina Santiago and Felix Dubois, “99 Red Balloons” by Nena, performed Dr. Liesl Obrecht, and “Marry You” by Bruno Mars, performed by Brad Cooper.

On Thursday on B&B, intern and aspiring fashion designer Beverly (played by Gina Rodriguez in her first role) stood her ground when Forrester Creations designer Amber (Frantz) issued her a “friendly warning” to stay away from Rick (Jacob Young). In Cabo, Steffy urged Thomas (then played by Adam Gregory) to commit to Hope (then played by Kim Matula) while trying to keep Liam from finding out that Hope was staying at the same resort. The episode originally aired on December 28, 2011.

Friday on Y&R, Lauren and Michael saw double as they came face to face with Lauren’s imposter while Kevin raced to save Jana (Emily O’Brien) from Ryder (Wilson Bethel). The episode originally aired on April 27, 2010.

Steve prepared to tell Kayla he wanted to be with her on Friday on DOOL while Xander confronted Brady about stabbing him in the back. Also, John ripped into Victor for what he did to Brady, and Sonny and Justin had a heart-to-heart at Adrienne’s gravesite.

Friday’s GH episode originally aired on May 5, 2015. Duke took a hit out on Jordan; Spencer received a surprise visit from a loved one; and Elizabeth pleaded with Nikolas to keep the truth about Jason between them. Musical performances included “Crazy Little Thing Called Love” by Queen, performed by Eddie Maine; “It Might Be You” by Stephen Bishop, performed by Damian Spinelli; and the original song “You’re Not Alone” performed by Epiphany Johnson and Sabrina Santiago.

On B&B on Friday, after his meeting with Bob Barker (Barker, playing himself), Liam interrupted a contentious exchange with his brother, Wyatt (Darin Brooks). Wyatt followed Liam, determined to continue their argument, and made a negative first impression on Barker. In return, Barker left a lasting impression on Wyatt when, in an homage to his role in “Happy Gilmore,” he punched Wyatt as Liam watched in amusement. Just shy of his 90th birthday, Barker did not use a stunt double. The episode originally aired on August 28, 2014.