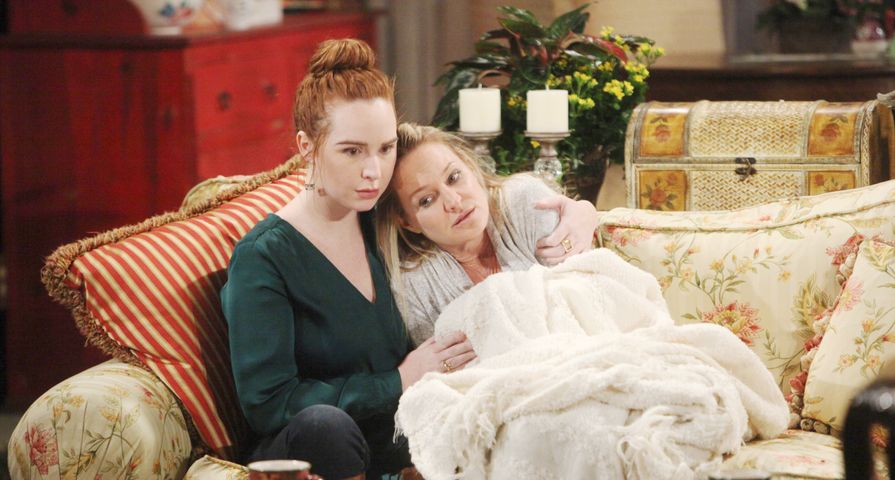 It was a dramatic week on The Young and the Restless, Days of Our Lives, General Hospital and The Bold and the Beautiful! Find out what you missed with your spoilers recap for March 9-13:

Monday on Y&R, Nick was named CEO of Newman while Chelsea offered to help Adam get revenge. Also, Billy and Amanda kissed.

Marlena tried to talk her way out of Rolf’s procedure on Monday’s episode of DOOL while John, Justin, and Kayla found themselves in grave danger. Also, Chad attempted to smother Gabi, and Ben thanked Ciara for saving his life.

There were a few new developments for GH fans on Monday. Alexis was not able to help herself; Maxie supported Peter; and Jason found refuge at the Quartermaines.

On Monday’s episode of B&B, Steffy told Hope the truth about Thomas, and Brooke and Bill shared a passionate, unplanned kiss.

Tuesday on Y&R, Nikki went outside her comfort zone, and Devon worked to build his empire. Also in that episode, Sharon’s chemo was canceled; Kyle advised Mariah to go to Tessa; and Amanda was inspired.

Chad received orders to dispose of Kate on Tuesday on DOOL while Stefano tried to reconnect with Marlena after Dr. Rolf’s procedure. Also, Justin confided in Jack about his fear of losing Kayla, and John sought Gina’s help to find Stefano and Marlena.

There were a few spoilers for GH fans on Tuesday. Neil was interrupted; Julian ran into Ava; and Brad got a warning.

Liam, Hope, and Steffy came up with a plan to protect Douglas and put Thomas in his place on Tuesday’s episode of B&B while Brooke and Bill reflected on their kiss and their relationships with Ridge and Katie.

Wednesday on Y&R, Adam’s motives were questioned, and Chelsea made plans for the future. Also, Abby hatched a plan to get back the last copy of the recording, and Ashley urged Billy to move forward and be happy.

To Rafe’s dismay, Evan scored a legal victory on Wednesday on DOOL while John apprehended Rolf. Also in that episode, Gina taunted Shawn and Ciara, insisting they would never get their mother back, and Kate was unaware her life was in danger.

There were a few new developments on Wednesday. Sonny made his intentions clear; Neil was stunned; and Molly pressed Jordan for info.

Steffy and Brooke tried to make Zoe see the truth about Thomas’ obsession with Hope on Wednesday’s episode of B&B. Also, Liam and Hope arrived at Thomas and Zoe’s wedding with a plan and surprises.

Thursday on Y&R, Billy was surprised by Jill, and Nick and Phyllis made love on his desk. Also in that episode, Billy learned he’d be working with Lily, and Abby tried on her Phyllis costume.

Will laid into Victor on Thursday’s episode of DOOL while Kristen and Brady reminisced about Rachel. Also, Rafe and Sonny confronted Evan, and a suspicious Nicole questioned Xander about Dr. Raynor.

There were a few spoilers for GH fans on Thursday. Stella paid Curtis a visit; Jordan was beside herself; and Michael was amused.

On Thursday’s episode of B&B, Bill ranted about Thomas to Wyatt after his son interrupted his daydream about Brooke, and Zoe wanted Thomas to move ahead with their wedding vows despite Douglas’ meltdown.

Friday on Y&R, Nikki was concerned about Victoria, and Phyllis took a hard line with Chance.

Evan met up with someone unexpected on DOOL on Friday, and Kristen asked Eric if she can hold Mickey. Also, Will and Sonny recommitted to their marriage, and Nicole started to put the pieces together regarding Mickey and Rachel.

There were a few new developments for GH fans on Friday. Michael and Sasha had an emotional discussion; Willow began to open up; and Brook Lynn confronted Julian.

Bill let Wyatt know how he felt about Brooke’s relationship with Ridge on Friday’s episode of B&B while Hope shocked the wedding party with her return after following Douglas upstairs.