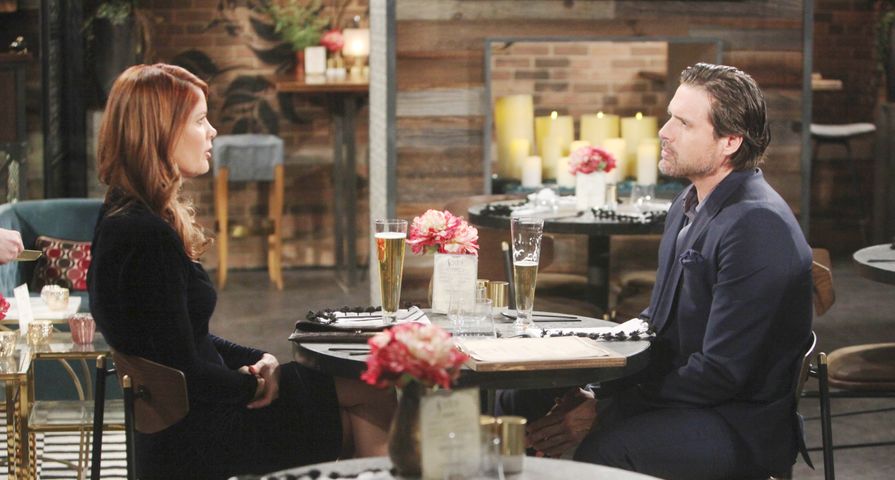 It was a dramatic week on The Young and the Restless, Days of Our Lives, General Hospital and The Bold and the Beautiful! Find out what you missed with your spoilers recap for March 2-6:

Monday on Y&R, Tessa caught Mariah with Lindsay while Victoria was done with Billy. Also, Amanda couldn’t wrap her mind around Ripley wanting to hurt her; Nikki was concerned about Victoria; and Sharon opened up to Jack about her cancer.

Evan revealed his secret to Sonny on Monday’s episode of DOOL while Ciara tried to stop Ben’s execution. Also, Kayla was horrified as Rolf suggested a new way for Stefano to have Marlena, and Justin turned to John for help.

There were a few new developments on Monday for GH fans. Multiple casualties were admitted to the ER at General Hospital; Laura was confrontational; and Sonny demanded answers.

Katie made a slip that caused Sally to become suspicious on Monday on B&B. Meanwhile, Sally agreed to a stunning proposal from Wyatt, unaware that he knows she’s dying.

Tuesday on Y&R, Victor made a difficult decision regarding his company while Victoria received a visit from her son when Tristan Lake Leabu returned to Y&R as Reed Hellstrom. Also, Tessa walked out on Mariah after she denied getting intimate with Lindsay; Phyllis was stranded at Nick’s place when a storm hit; and Elena, Devon and Nate were stuck at the clinic.

On Tuesday’s episode of DOOL, Ciara and Will were in a race against time as they worked to exonerate Ben. Also, Ben saw flashes of his life with Ciara as the lethal injection was administered; Kristen laid into Gabi; and Xander was upset when he ran into Dr. Raynor, who knew about the baby switch.

Brook Lynn was anxious on Tuesday on GH. Also, Michael looked to Ned for support, and Alexis offered legal advice.

Thomas was called out by Vinny for using Douglas on Tuesday’s episode of B&B. Also in that episode, Thomas sped up the timeline for his wedding with Zoe to up the ante.

Wednesday on Y&R, Ashley and Jack took care of unfinished business while Chloe caught Kevin in a trap. Also, Lauren and Michael weathered the storm; Chloe started having contractions during the storm; Billy thought Amanda was his answer; and Theo and Lola got stuck together.

The drama continued on Wednesday’s episode of DOOL, as Ben flatlined. Also in that episode, Nicole suspected that Xander and Dr. Raynor shared a secret, and Maggie prepared to turn herself in.

On Wednesday on GH, Jason confronted Curtis; and Willow had a hard time facing reality. Also, Chase looked to Michael for advice.

Steffy’s belief in Thomas was shattered after she overheard a conversation on Wednesday’s episode of B&B. Also, Hope turned to Liam after a clash with Thomas.

Thursday on Y&R, Amanda was comforted by Billy while Elena and Nate answered a call for help. Also, Devon made an admission; Sharon had a health crisis; Chloe walked in on Michael and Lauren; and Billy wanted a fresh start.

Jennifer had an intense confrontation with Princess Gina on Thursday’s episode of DOOL, and Justin and Marlena met with Stefano to negotiate Kayla’s release. Also, Roman blasted Kate for aiding and abetting Gina and Stefano while Chad fell under Stefano’s spell.

There were a few new developments for GH fans on Thursday. Ava visited Elizabeth; Jordan was furious; and Spinelli pressed Obrecht.

On B&B on Thursday, Carter tried to reason with Zoe and assured her she can do better than Thomas while Thomas and Steffy had a heated argument about his intentions and past transgressions.

Friday on DOOL, Chad prepared to carry out his father’s wishes, and John and Justin’s plan went horribly awry. Also, Julie blasted Gabi for her actions while Eli and Lani’s reunion was interrupted by unhappy news.

There were a few new developments on GH on Friday. Alexis ran into Nelle; Anna corner Obrecht; and Finn bonded with Violet.

On Friday’s episode of B&B, Shauna feared a Brooke and Ridge reunion if Thomas marries Zoe, while Thomas was unaware that his web of deceit was unraveling.