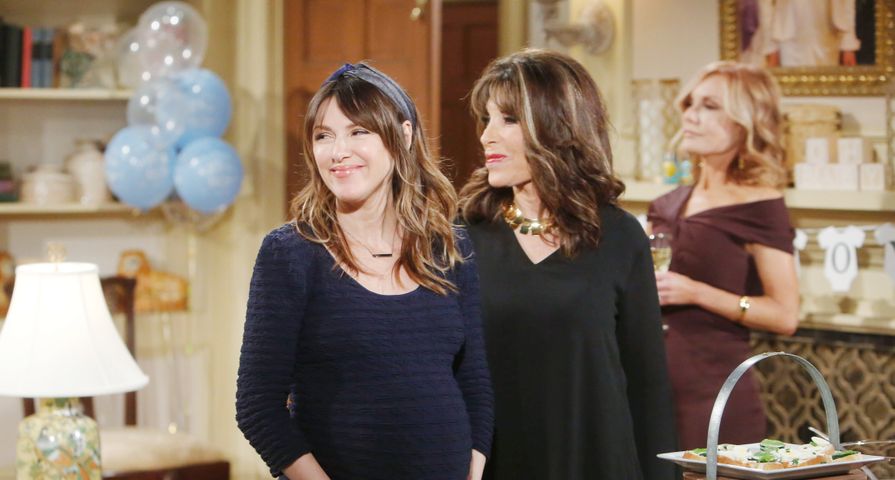 It was a dramatic week on The Young and the Restless, Days of Our Lives, General Hospital and The Bold and the Beautiful! Find out what you missed with your spoilers recap for April 2o-24:

Steve made a surprising decision regarding Kayla on Monday while Rafe was thrown when Zoey declared she’s suing for custody of David. In other spoilers, Orpheus paid Marlena a visit, and Jack comforted Jennifer, who was unnerved about Orpheus being free.

There were a few spoilers for GH fans on Monday. Sonny was surprised; Michael was reluctant to leave Wiley’s side; and Robert shared somber news.

Wyatt’s guilt about asking Sally to move out increased on Monday on B&B, and Flo played a devious trick on Sally.

Tuesday on Y&R, Victor did damage control and a baby shower took place for Chloe and Kevin. Also, Victor threatened Alyssa and then told Adam that he was responsible for AJ Montalva’s passing while Chloe asked Chelsea to be her baby’s godmother.

Kate applied for a job with Abe on Tuesday on DOOL while Hope and Steve commiserated together. Meanwhile, Gabi went up against Chad, and Kayla told Justin her decision about their future.

There were a few spoilers for GH fans on Tuesday. Sonny missed his meeting with Cyrus; Julian caught the attention of an unwelcome source; and Valentin was thrown for a loop.

Quinn stunned Wyatt by siding with Katie when it came to the situation with Sally and Flo during Tuesday’s episode of DOOL while Flo got the upper hand.

Wednesday on Y&R, Phyllis was motivated by Jack. Also, Adam refused to believe Victor, and Kyle had regrets about Theo.

Brady, Kristen, Eric, and Nicole waited for word on Sarah and the baby on Wednesday’s episode of DOOL while Chad and Abigail took opposite sides over Kristen and Sarah’s situation. Also, Victor berated Xander for allowing the truth to come out, and Gabi lobbied for the CEO position at DiMera.

There were a few spoilers for GH fans on Wednesday. Willow was devastated. Nina learned a little more about Nelle; and Sam apologized to Alexis.

Bill talked Wyatt through his feelings surrounding Flo and Sally on Wednesday on B&B while Flo and Sally’s argument escalated when Dr. Penny Escobar arrived.

A secret came to light that rocked the Newman family during Thursday’s episode of Y&R. Also, Victoria reclaimed the CEO title; Mariah called a truce with Theo; and Victor blamed Nikki.

Thursday on DOOL, Kristen attacked Victor while Gabi was stunned when she saw a familiar face. Also, Li Shin made a decision about Chad’s fate at DiMera, and Sarah hid out in Paris with Rachel.

There were a few spoilers for GH fans on Thursday. Sonny confided in Jason; Sam crossed Brando; and Jordan contemplated resigning.

Wyatt and Bill shared regrets about the pain they’ve caused Sally and Katie on Thursday on B&B while Wyatt’s arrival caused panic after Sally and Penny knocked Flo unconscious.

Ben had a shocking encounter on Friday’s episode while Chad and Abigail celebrated their victory. Victor was rushed to the hospital, and Xander pleaded with Sarah on the phone, insisting he could help her.

On Friday on GH, Sonny dreamed of what a different life would look like.

B&B aired a Monte Carlo-themed episode on Friday that showed Forrester Creations and Spectra Fashions facing off for a fashion showdown that benefitted charity.