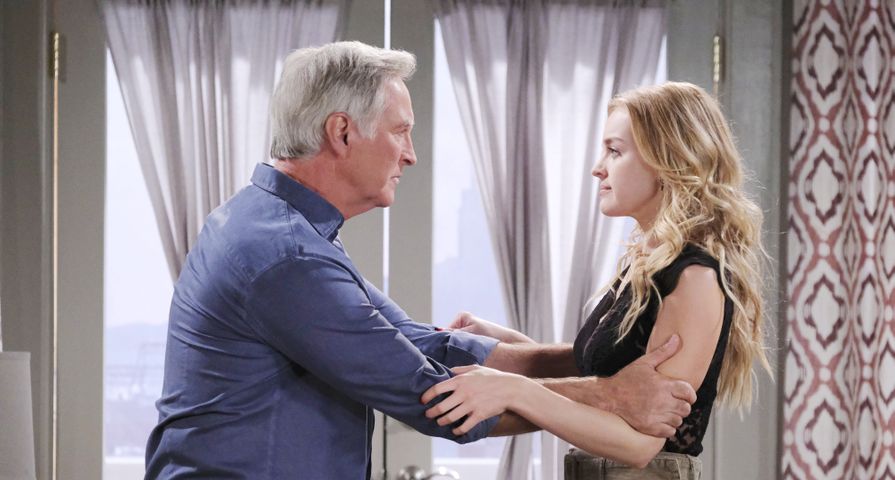 It was a dramatic week on The Young and the Restless, Days of Our Lives, General Hospital and The Bold and the Beautiful! Find out what you missed with your spoilers recap for June 8 to June 12, 2020:

Ben, Jake, and Ciara tried to track down Gwen, played by Y&R alum Emily O’Brien. She was in Bayview with Claire, her new BFF. Also, Belle and Shawn arrived in Salem to discuss Claire’s future; Will and Sonny realized Gabi is missing; and Claire asked Gwen to keep her secret.

GH’s Monday episode originally aired on May 18, 2018. Finn was going to be apologetic. Ava tried to entice Griffin. Josslyn connected with Oscar. Valentin pleaded with Nina. Peter’s plans were delayed.

On B&B on Monday, the show’s very first episode aired. Viewers were introduced to Forrester Creations fashion mogul, Eric Forrester and his sons Ridge (then played by Ronn Moss) and Thorne (then played by Clayton Norcross) during the preview of Eric’s new couture line to the press. Publishing mogul Bill Spencer, Sr. (Jim Storm) demanded that playboy Ridge stop dating his daughter Caroline (Joanna Johnson) before he broke her heart. Brooke arrived home to her sister Katie (then played by Nancy Sloan) after being attacked on her way home from college. The episode originally aired on March 23, 1987.

Claire privately anticipated Ben and Ciara’s wedding on Tuesday’s episode of DOOL while Hope reassured Ciara about Claire’s impending release. Also, Will and Sonny pressed Ben and Jake to tell them what they know about Gabi’s disappearance, and Eric told Abe he wants to surprise Nicole by getting married immediately.

On Tuesday on B&B, Eric Forrester and Ridge Forrester competed against one another as lead designers in an elegant fashion show set amidst the romantic and glamorous backdrop of Portofino, Italy. As Massimo Marone (the late Joe Mascolo), Bridget (then played by Jennifer Finnegan), Sally, Darla (Schae Harrison) watched Ridge, designing for Spectra Fashions and Eric, designing for Forrester Creations, bring their best to the “Portofino Challenge.” Stephanie and Clarke (Dan McVicar) emceed the event and Brooke stunned as the showstopper arriving via boat on the Ligurian Sea. The episode originally aired on September 16, 2003.

Wednesday on Y&R, Michael proposed to Lauren while Nick and Sharon awaited news on Cassie’s condition. The episode originally aired on May 5, 2005.

Lucas came to Kate with distressing news on Wednesday’s episode of DOOL while Rafe was dealt a huge blow. Also, Eric and Nicole received an unexpected visitor, and Kayla questioned Steve about his behavior.

On Wednesday on B&B, Brooke antagonized Stephanie about becoming Mrs. Ridge Forrester again after Ridge puts a ring on her finger. Stephanie and Sally drank to ease their woes when Sally decided that what Stephanie needed to win Eric back is a makeover. In a hilarious scene, a drunken Sally gave an equally drunk Stephanie a haircut while listing her workplace demands after Stephanie offered her a job at Forrester Creations. The episode originally aired on January 6, 2003.

Thursday on Y&R, Chloe professed her love to Kevin, and Daniel (Michael Graziadei) rang in the New Year with Abby (then played by Emme Rylan). The episode originally aired on December 12, 2010.

Allie pleaded with Eric and Nicole to keep her secret on Thursday’s episode of DOOL while Eli and Lani made a big decision about their wedding. Also, Hope comforted Rafe in the wake of his loss, and Will and Sonny discussed their plans to have a baby.

On Thursday on B&B, Oliver (Zach Conroy) threw Hope (then played by Kim Matula) a special masquerade party in celebration of her high school graduation. With all of the women dressed alike in sequined dresses and all men and women disguised with full face masks, what could possibly go wrong? Brooke, in costume, chaperoned the party waiting for Ridge while he attempted to persuade Steffy not to crash the party. Caught up in the beat of Daddy Yankee’s performance, Brooke and Oliver, Hope’s boyfriend, made a passionate case of mistaken identity. The episode originally aired on June 4, 2010.

Friday on Y&R, Lily and Cane invited family and friends to Provence, France, for their second wedding, and Victor and Nikki worried about Victoria’s future with Billy (then played by Billy Miller). The episode originally aired on February 13, 2012.

Ciara confronted Brady about his true intentions on Friday’s episode of DOOL while Allie dropped a bombshell on Lucas. Also, Claire was released from Bayview, and Xander sought advice from Jack about Sarah.

On Friday on B&B, Wyatt was horrified to find out that his mother Quinn had kidnapped his brother Liam, who was suffering from amnesia and living with him as man and wife, “Adam” and “Eve.” Meanwhile, Bill questioned Steffy about Wyatt’s theory that Liam is just “trying to find himself.” Alone in the cabin he shared with “Eve,” Liam, through a series of flashbacks, slowly regained his memory, realizing who he was, Liam Spencer, and who he had lost, Steffy. In a moment of clarity, Liam confronted Quinn and with the help of Wyatt locked her in a closet before returning to Malibu for a bittersweet reunion with Steffy. The episode originally aired on April 8, 2016.