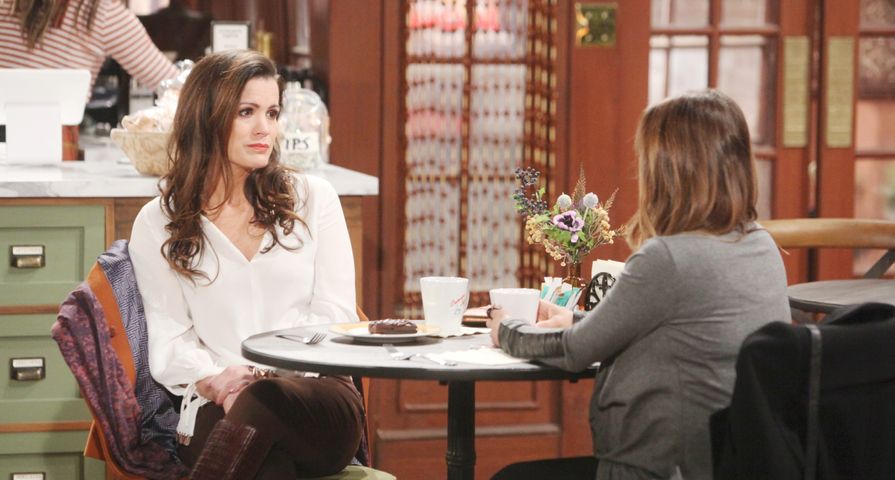 As always, it was a dramatic week on The Young and the Restless, Days of Our Lives, General Hospital and The Bold and the Beautiful! Are you wondering what you missed? Find out with this spoilers recap for March 16-20:

Monday on Y&R, Rey learned a secret, and Tessa struggled to deal with Mariah’s betrayal and realized that she can’t forgive her. Also, Adam connected Victor to a past incident on the farm, and Faith spent time in Lola’s kitchen.

Nicole reeled when she realized that Mackenzie could be Brady and Kristen’s child on Monday’s episode of DOOL while Xander proposed to Sarah. Also, John questioned Kristen about Stefano, and Evan conspired to keep David.

There were a few new developments on Monday on GH. Sonny stayed true to his word; Jason was on high alert; and Julian was relieved.

On Monday’s episode of B&B, Steffy told Brooke and Ridge about her role in Thomas’ manipulation of Hope and Liam, and Douglas prepared a sweet surprise for Hope, Liam, and Beth.

Tuesday on Y&R, Chance gave Jill bad news, and Jack worked to keep Theo under control. Also, Billy’s devil-may-care lifestyle caught up to him; Jill learned that Colin had laundered money through Chancellor Industries; Mariah got a job offer and a concert invitation; and Theo had a suggestion for his first date with Lola.

Clyde was thrown when Ben told him Evan’s real name on Tuesday’s episode of DOOL while Ciara delivered bad news to Ben. Also in that episode, Gina made one last plea to Rolf to save her, and Lani and Eli helped Rafe search for David.

A few things happened on GH on Tuesday. Jason was wary; Jordan told Sam to back off; and Alexis changed the conversation.

During Tuesday’s episode of B&B, Brooke welcomed Ridge home with a romantic night full of passion, and Hope and Liam reunited their family with help from Douglas.

Wednesday on Y&R, Phyllis worked to cover her tracks, and Victor became suspicious of Adam when he had a change of heart. Also, Amanda confided in Nate about her past; Mariah made a public apology; and Nick and Phyllis tried but failed to cover the fact they are sleeping together.

Jennifer and Kayla revealed devastating news to Hope on Wednesday’s episode of DOOL while Hope was shocked to learn Rolf turned her into Princess Gina. Also, Clyde revealed to Ben how he was partly responsible for Jordan meeting Evan, and Rafe grilled Evan.

There were a few new developments on Wednesday on GH. Trina was full of blame; Maxie and Lulu traded barbs; and Jordan felt pressured.

On Thursday’s episode of DOOL, Xander warned Victor that Nicole was on to them while Stefano instructed Chad to organize a family reunion. Also, Kristen and Brady comforted one another as they reminisced about Rachel, and Nicole took steps to prove her suspicions.

A few things happened on GH on Thursday. Brando was worried; Anna blamed Jason; and Spinelli received some unsolicited advice.

B&B aired a new episode on Thursday as March Madness was canceled.

On Friday’s episode of DOOL, Chad attacked Kate and Gabi, and Nicole picked a fight with Kristen. Also, Hope pressed Kayla to learn what other damage she caused while she was Gina while Stefano made headway with Marlena.

A few things happened on Friday on GH. Brook Lynn had it out with Lulu; Lucy had an interesting proposal; and Valentin considered his next move.