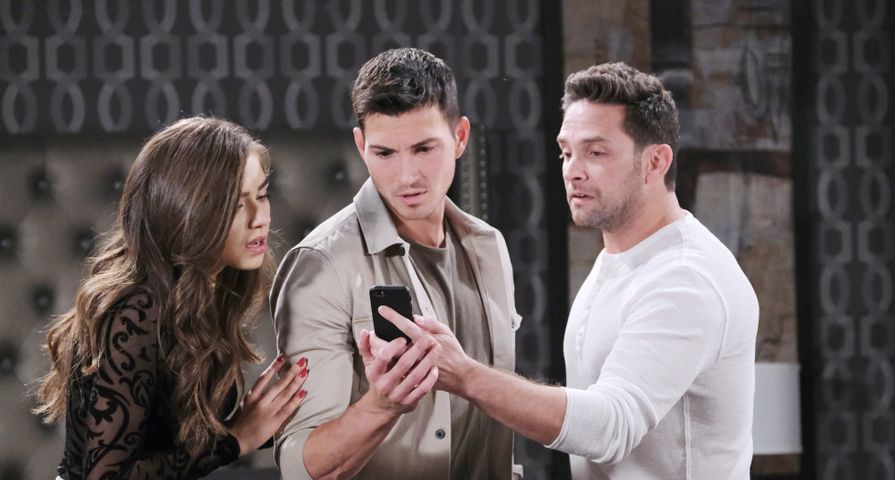 It was a dramatic week on The Young and the Restless, Days of Our Lives, General Hospital and The Bold and the Beautiful! Find out what you missed with your spoilers recap for June 1 to June 5, 2020:

Monday on Y&R, family and friends gathered to witness the nuptials of Traci and Brad (Don Diamont) while Katherine and Dina plotted against Jill. Also,  Nikki struggled with her drinking. The episode originally aired on January 11, 1991.

Lani grappled with her fears about her pregnancy during Monday’s episode of DOOL while Steve witnessed Justin’s proposal to Kayla. Also, Will and Sonny made a life-changing decision.

Musical performances include “Don’t Go Breaking My Heart” by Elton John & Kiki Dee performed by Emma Scorpio-Drake and Eddie Maine; “This Changes Everything” by Chris Ryan performed by Jake Spencer and Franco Baldwin; and a striptease to “Demon in Disguise” performed by Magic Milo and the Magic Wands (Felix DuBois, Dillon Quartermaine, Griffin Munro, Curtis Ashford and Milo Giambetti).

On Monday on B&B, the battle between long-time nemeses Stephanie Forrester and Sally Spectra heated up when Sally, irate over a disparaging interview Stephanie gave to a trade paper regarding the quality of Spectra Creations, confronted Stephanie at her home. As they hurled insults back and forth, the spat quickly turned comical, with Sally ending up in Stephanie’s pool. Meanwhile, Sally’s husband, Clarke (Dan McVicar), flirted with Stephanie’s daughter, Felicia (then played by Colleen Dion-Scotti), making her a business proposition that’s hard to refuse, and Macy (Bobbie Eakes) and Jake (Todd McKee) began to explore their burgeoning feelings for one another. The episode originally aired on February 19, 1992.

Tuesday on Y&R, Jack smelled success as John Abbott regained control of Jabot, and Victor and Ashley made amends. The episode originally aired on September 17, 1999.

Jake came clean with Ben on Tuesday’s episode of DOOL while Sarah laid into Victor for what he did to her. Also, John questioned Brady’s motives, and Marlena received a surprising call.

Tuesday’s GH episode’s original air date was May 23, 2017. Jake showed Emma and Charlotte the Chimera canister that was sent to him; Jason found Anna’s Chimera necklace on the floor; and Sonny had Morgan’s medication.

On Tuesday on B&B, the sinister Sheila Carter (Kimberlin Brown) threatened Stephanie for keeping her from Eric while Ridge (then played by Ronn Moss), Brooke, Eric, Dr. James Warwick (Ian Buchanan) and Lauren Fenmore attempted to talk her down. Meanwhile, Taylor and her father, Jack Hamilton (Chris Robinson), tried to make sense of why Ridge married Brooke so soon after he thought Taylor passed away. Darla (Schae Harrison) brought Sally Spectra a new hairdresser, Gladys (the late Phyllis Diller), who revealed that Taylor was still alive! The episode originally aired on June 7, 1995.

Wednesday on Y&R, Jack proposed to Phyllis, and tensions arose between Traci and Ashley. The episode originally aired on September 10, 2001.

Xander asked Sarah for another chance on Wednesday’s episode of DOOL while Eric and Ciara shared their concern for Brady. Also, Ben offered to help Jake locate his ex-girlfriend, and Claire pleaded with Marlena to help her gain early release from Bayview when Olivia Rose Keegan returns to Days.

Wednesday’s GH episode aired on May 24, 2017. Jake was scared when he saw the Chimera symbol on Anna’s necklace. Valentin told Anna he sold the Chimera to Helena Cassadine. Michae visited Nelle in the hospital.

Musical Performances included Sara Bareilles’ “Brave” performed by Emma Scorpio-Drake, Amy Driscoll, Kristina Corinthos-Davis and Valerie Spencer; “And So It Goes On” by Billy Joel performed by Valentin Cassadine; and “It’s Not Over Yet” performed by Josslyn Jacks.

On Wednesday on B&B, decades-long rivals Taylor and Brooke flung accusations, past hurts and wedding cake at each other during Hope and Liam’s wedding reception. Caught by their daughters, Steffy and Hope, Taylor and Brooke were made to go back into the ceremony and face their families, each of whom has something to say about the situation. The episode originally aired on August 22, 2018.

Thursday on Y&R, as the family mourned the loss of John Abbott, Kevin and Michael helped Gloria fight for her place among the Abbotts. The episode originally aired on August 24, 2006.

Hope went to bat for Rafe in his custody battle with Zoey on Thursday’s episode of DOOL while Jack gave Steve advice about Kayla. Also, Lani and Eli shared exciting news with Abe and Julie, and Zoey got into it with Orpheus as George DelHoyo exits Days of our Lives.

GH’s Thursday episode originally aired on May 25, 2017. Sonny and Carly learned that Ava switched Morgan’s pills. Nina took Valentin back. Anna told Jason she is looking for a bio-toxin known as the Chimera. Jake saw Helena order him to do his magic trick featuring the Chimera.

On Thursday on B&B, enraged that Brooke was at her family’s Big Bear cabin to seduce her youngest son, Thorne (then played by Winsor Harmon), Stephanie Forrester arrived during a raging storm to confront the woman she felt was destroying her family. Frightened by Stephanie, Brooke attempted to reason with her but soon realized that Stephanie meant her serious harm. Meanwhile, an angry Kimberly (Ashley Cafagna) arrived at the Forrester Mansion to confront Brooke but, instead, she found Rick (then played by Jacob Young), who had feelings for the beautiful model. The episode originally aired on August 3, 1999.

Friday on Y&R, Dina reminded the Abbotts of the true meaning of Christmas; Kyle and Lola celebrated their first Christmas as a married couple; and Billy kept a secret from his family. The episode originally aired on December 24, 2019.

Jake revealed to Ben and Ciara that Gabi has been kidnapped on Friday’s episode of DOOL while Marlena discussed Claire’s request with John. Also, Claire confided in her new friend and fellow patient, Gwen, and a drunk Steve was tempted to tell Kayla the truth.

On B&B on Friday, in what was the most anticipated episode of 2019, Douglas revealed to Liam that Phoebe was Beth. Liam raced against time to save Hope from Thomas and tell her the truth. Liam and Thomas had a battle of epic proportions on the rooftop of Forrester Creations, which resulted in Hope learning the truth that her beautiful baby Beth was alive and that her family could be reunited. Heartbroken, Flo attempted to convince Wyatt not to leave her over her part in the baby Beth scandal. Ridge assured Steffy that she was Phoebe’s mother and that she had nothing to worry about. The episode originally aired on August 5, 2019.