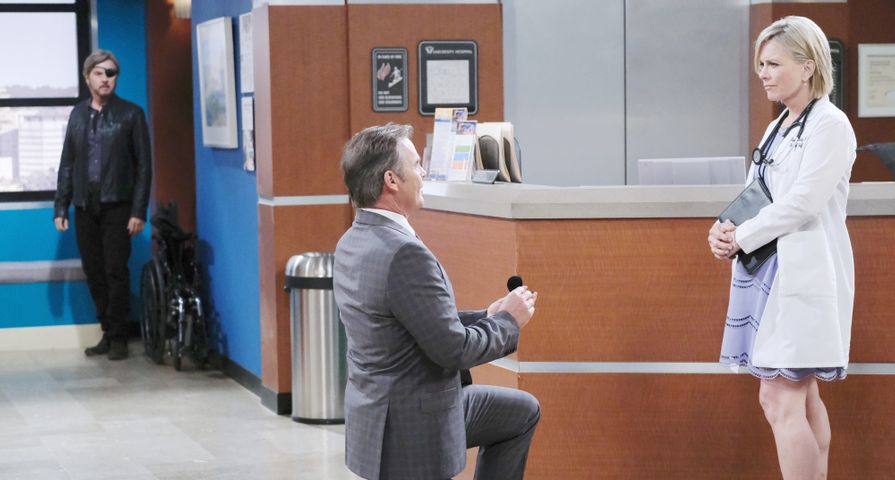 There weren’t any dull moments today on The Young and the Restless, Days of Our Lives, General Hospital and The Bold and the Beautiful! Find out what happened with our recap for June 1, 2020:

Monday on Y&R, family and friends gathered to witness the nuptials of Traci and Brad (Don Diamont) while Katherine and Dina plotted against Jill. Also,  Nikki struggled with her drinking. The episode originally aired on January 11, 1991.

Lani grappled with her fears about her pregnancy during Monday’s episode of DOOL while Steve witnessed Justin’s proposal to Kayla. Also, Will and Sonny made a life-changing decision.

Musical performances include “Don’t Go Breaking My Heart” by Elton John & Kiki Dee performed by Emma Scorpio-Drake and Eddie Maine; “This Changes Everything” by Chris Ryan performed by Jake Spencer and Franco Baldwin; and a striptease to “Demon in Disguise” performed by Magic Milo and the Magic Wands (Felix DuBois, Dillon Quartermaine, Griffin Munro, Curtis Ashford and Milo Giambetti).

On Monday on B&B, the battle between long-time nemeses Stephanie Forrester and Sally Spectra heated up when Sally, irate over a disparaging interview Stephanie gave to a trade paper regarding the quality of Spectra Creations, confronted Stephanie at her home. As they hurled insults back and forth, the spat quickly turned comical, with Sally ending up in Stephanie’s pool. Meanwhile, Sally’s husband, Clarke (Dan McVicar), flirted with Stephanie’s daughter, Felicia (then played by Colleen Dion-Scotti), making her a business proposition that’s hard to refuse, and Macy (Bobbie Eakes) and Jake (Todd McKee) began to explore their burgeoning feelings for one another. The episode originally aired on February 19, 1992.