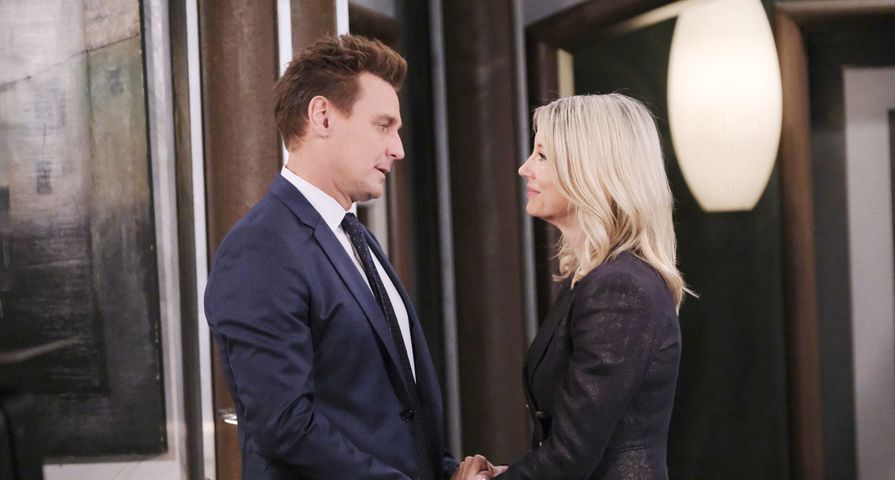 It’s been a roller coaster ride in the land of Port Charles as of late, with twists and turns at every corner. What should General Hospital (GH) fans expect for the coming week ahead? More of the same drama! Peter makes an ally, while Valentin is taken aback, and Maxie does what’s best for her baby. Learn about these storylines and others in the below GH spoilers for the week of March 15, 2021.

GH spoilers indicate that Peter will deny, deny, deny this week. Seems as if he’ll be questioned on something, and he’ll simply negate any wrongdoing. Could this be about Franco’s shooting? In other related teasers, August will make an unlikely ally as the weekend hits. Who could want to help him at this point?

Across town, Valentin will be busy this week. First off, he’ll organize a meeting with Michael to talk about ELQ and its future. As the days go by, Cassadine will offer some help to Britt; however, Westbourne will refuse it. Lastly, as Friday approaches, Valentin will be stunned by a turn of events.

7. Maxie Focuses On Her Baby

GH spoilers reveal that Maxie will focus on doing what’s best for her baby this week. Does that mean a life with or without Peter August? In other related teasers, Sam will turn to Jones in the coming days and ask for help, but will Maxie be willing to come to her friend’s aid?

GH spoilers suggest that Alexis will take a stroll down memory lane and reflect on lost love. As the days go by, she’ll make a hard choice about the future. In other related teasers, Kristina will hit her boiling point and lash out at someone. Who could be pushing her buttons?

With Franco’s passing, Elizabeth is sure to have a hard week ahead. GH spoilers note that she’ll be somber early on. As the weekend hits, added teasers imply that she and Carly will exchange words. With all that Liz is going through, could Carly cross a line? Could this “conversation” have to do with Liz’s belief that Jason shot her husband? In other Carly news, she’ll be defiant in the coming days.

GH spoilers reveal that Sam and Dante will continue to bond this week, as the two meet up at Kelly’s for a bite to eat and some conversation. Not the most romantic date, but they aren’t really there yet! In other Sam news, she’ll feel the need to intervene in a situation, as the weekend hits.

GH spoilers state that Brando will visit Gladys this week. Sounds as if he’ll have some questions for her and hope she’ll be honest about them. In other related teasers, Sasha will visit with Corbin in the coming days. Seems like these two remain committed to staying in touch. Even if it’s just as friends (for now).

GH spoilers indicate that Nina will be apologetic this week. With all that she’s been through, and everyone she’s lashed out to as of late, who could she be saying “sorry” to? In other Nina teasers, her ex, Jax, will hope to reconnect in the coming days, but will she be able to accept what he did so that they can move forward? Or are they “done” for good?

Phyllis will be taken aback when an unexpected guest comes for a visit, meanwhile, Jackie will try to apologize to Gregory. Will he accept it and move on? In other GH spoilers for this week, Michael will be stunned by something unexpected, while Laura will be doubtful. Lastly, Curtis congratulates TJ, and Olivia offers up advice to someone close.