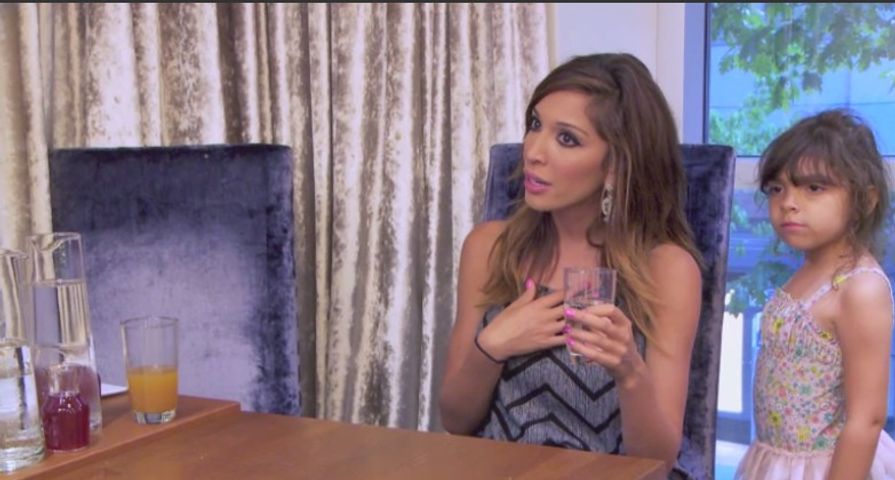 Ever since her appearance on MTV’s 16 and Pregnant, Farrah Abraham has been one of the most controversial and talked about reality stars out of them all. Her publicity continued thanks to being cast as one of the four stars on the original Teen Mom series, and thanks to her many other antics including a career in the adult film industry, and endless controversial comments. It’s kind of hard for some to accept that, through it all, Farrah Abraham is also the single parent to her 7-year-old daughter, Sophia. Unfortunately more than once Farrah has made fans’ jaws drop by the things she has said to or done with Sophia, leaving us with these 10 most shocking parenting moments.

As Sophia has gotten older, Farrah has taken to using her daughter on social media to promote her own brands or business deals. She also has posted about several current controversial issues in a way that many feel is inappropriate. Recently, Farrah posted one of Sophia’s modeling shots alongside a quote by Martin Luther King reading, “Our Lives Begin to End the day we become Silent about things that Matter.” She then added a caption, “#HappySunday & all of our love & prayers go out to the families that were effected by the police, guns, protestors, riots, and all the hurt, confusion & lack of control . History I hope can stop repeating it’s self as we all strive to make a positive change for our futures. #rip #free #sunday.”

Fans of the series are well aware of an interesting situation that happened in season five of Teen Mom OG when Debra tells Farrah that they had a little issue with Sophia’s principal. At the time Debra had been watching her granddaughter while Farrah was in the UK filming Celebrity Big Brother, and she explained to Farrah that the principal told Sophia she should not be wearing makeup to school at only 6 years old, but Debra said she “handled it.” Almost a year later Farrah opened up about the situation saying, ” I was the only mother in freakin’ elementary school getting called in to deal with makeup on her daughter,” and also explained how she told the principal off. Naturally, it is concerning for many that Sophia already feels the need to wear makeup every day.

A few years ago in 2013 when Sophia was only four years old, Farrah made some more shocking comments that made headlines and drew heavy crticism from a lot of people, but especially parents. At the time, Farrah was recently rebranded thanks to her stint in adult films, and because of her new career path was spending a lot of time away from her daughter because of commitments to club appearances, and other hosting duties in places and events her daughter most certainly couldn’t attend. When asked about spending so much time away from her young daughter, Farrah said, “It’s healthy that we have a break. She [Sophia] has her own life and is doing her own thing and I’m doing mine.” At 4 years old, no, Sophia does not “have her own life” and is not doing “her own thing.”

As someone who has undergone numerous plastic surgery operations herself it was only a matter time before she was asked about how she would feel about her own daughter getting plastic surgery, and even revealed at only 6 (at the time) Sophia already had insecurities, and Farrah would fully support plastic surgery for her daughter in the future. “My little Sophia, she’s been going through a hard time right now losing all of her teeth, and she’s not really so secure. I think it’s really a struggle losing your teeth right now when everyone’s looking at looks.” She added, “You’ll see that my daughter does value how I’ve done my look and invested in myself, and I feel like if [plastic surgery is] not harming her and making her look better, and keeping her healthy into her older years, I have no issues with that. I’m going to be supportive because it hurts me to see my daughter worrying about her looks, even while she’s losing her teeth right now, so that’s sad.”

While most of the things Farrah says are bound to cause controversy, especially when they seemingly negatively affect her daughter, there are only certain instances where Sophia causes concerns for viewers of Teen Mom OG herself. Farrah has often spoke about how Sophia already focuses on looks, and viewers saw just what that meant in the last season of the show when she was being looked after by Debra and Debra was trying very hard to get Sophia to eat all of her breakfast before school. After Sophia wouldn’t finish eating, Debra said she needed to pick out an outfit for school for Sophia, and got this shocking response, “Don’t make me look fat!” It is clear Farrah’s obsession with her physical appearance has rubbed off on her daughter and it was shocking to hear something like that come from a 6-year-old.

Sophia may have been self-conscious about losing teeth, but Farrah tried to help as best as she could by being the most over-the-top Tooth Fairy ever, and once again stirred up controversy about how she is spoiling Sophia. In late September 2015, Farrah posted photos to Twitter about what the “Tooth Fairy” gave Sophia, and it was a haul that included a new bracelet, “glitter dust” and a wad full of cash. Farrah had given her daughter the rest of her British pounds after her trip to the UK and it added up to an insane $1400. Most shocking was that this was two months after Farrah gave her daughter $600 for losing her two front teeth. Most children are lucky to get $2 from the “Tooth Fairy.”

4. Ganging Up on Debra

As Sophia gets older, one of the growing concerns for fans of the Teen Mom series is how Farrah’s attitude towards her mother Debra is rubbing off on Sophia. There have been many instances where Sophia has been outright rude and disrespectful towards Debra and Farrah not only doesn’t do anything about it, but she seemingly supports it because that is how she treats Debra. There have been many instances where Sophia tells her grandmother off, sticks her tongue out, and even slaps her with no repercussions, and most shocking is the way in which Farrah continuously swears at her mother while Sophia is with them.

This one is yet another moment where Farrah was a bad role model for her daughter. In March of 2013, Farrah was arrested for a DUI and instead of owning up to her mistakes she made excuses and made it seem like it wasn’t a big deal, but most unfortunate is the fact that something serious could have happened and Sophia had already lost her dad, Derek Underwood, in a car accident before she was even born. After the arrest Farrah said she wasn’t even driving really, just moved her car around the corner to park it, and then also said she wasn’t drunk but she was sick and that is why she blew twice the legal limit. Regardless only a few days later she posted a photo of herself drinking mimosas with her family and included the caption, “yes, we drink!”

Back in early January, 2016, Farrah Abraham got into a ridiculous feud with rapper/singer Nicki Minaj after Minaj apparently watched an episode of Teen Mom and tweeted about how badly Farrah treats her own mother. After a back and forth on social media, Abraham then did something truly surprising and dragged 6-year-old Sophia into the fight. Farrah posted a video to social media of Sophia saying, “Hi everybody. Nicki Minaj is a total loser,” while a text box across the video read, “Nicki Minaj Don’t Say Bad WORDS, I don’t.” It was a truly immature and irresponsible thing to put Sophia in the middle of the feud, not to mention that she encouraged her to call someone else a “total loser.”

Despite there being three years worth of more shocking Farrah Abraham behavior, one of the top most shocking parenting moments for the reality star remains when she admitted that she once waxed Sophia’s eyebrows when Sophia was only 3 at the time. Abraham stated that people kept commenting on her daughter’s “unibrow” so one day she decided to try to wax it, but as most 3-year-olds would, Sophia “freaked out.” That’s when Abraham said she then just plucked Sophia’s eyebrows while the toddler was sleeping. She continuously defended herself saying, “If I can help my daughter in a little way by just plucking a few hairs . . . I think I did something right,” and “Sophia’s beautiful with unibrow or without! Point is take care of your child’s hygiene.”