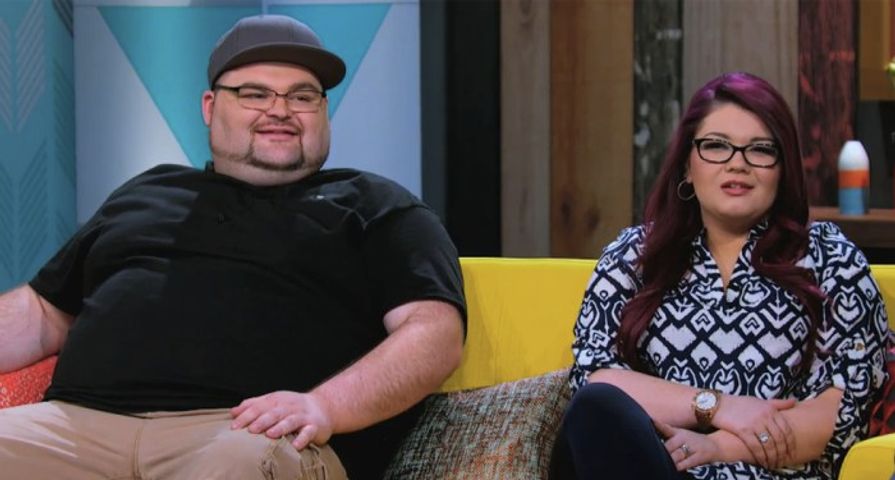 Fans of MTV’s Teen Mom series have seen star Amber Portwood go through a lot since beginning her journey on 16 and Pregnant. Since fans were introduced to Amber and Gary Shirley in their June, 2009 episode, they have loyally followed their story with Teen Mom OG and it has been nothing short of dramatic. A lot has changed in eight years, and even though they have shared their lives with MTV cameras and audiences, and have moved on with other people, there is still a lot fans never knew about the pair and their relationship. With the seventh season of Teen Mom OG on the way, here are 10 things you never knew about Amber and Gary’s relationship:

On 16 and Pregnant, fans never got Amber and Gary’s full story as it jumped right into when the young pair were expecting their daughter. In the episode, Amber said she met Gary because he was her brother’s friend, but in her book “Never Too Late,” she explained how they got together. A week before officially being introduced, Amber recalled seeing Gary in the library and it sticks out in her mind because of how big he was. The following week she was home sick from school and her brother came home with his friend who just happened to be the same guy, Gary. Amber remembers Gary as being “really proper and polite” and a good Christian boy. A little while later Amber got a call from Gary asking if her brother was home, but Gary had set the whole thing up because he had driven her brother to work and just wanted an excuse to call Amber. The pair ended up hitting it off right away and talked for about eight hours.

Source: Life and Style
Everything To Expect From Teen Mom OG Season 7B

Amber describes her first date with Gary as “amazing.” The pair picked up some friends and went to see Final Destination. She had the impression he was a “straight-edged football player guy,” but on the way to the theater, Gary’s friend Jordan kept telling Gary to “show her your nipples.” When he lifted his shirt Amber found out Gary had his nipples pierced and a “huge tattoo of a sun in the middle of his chest.” They ended up hanging out way too late and when Amber told him she would get in way too much trouble if she went home then, Gary offered to sleep in the car with her. He eventually ended up sneaking her into his house.”We just made out that night, nothing else. It was just a perfect night. Then I woke up to him shoving me off the bed onto the floor when his grandpa walked into the room.”

Those who have followed Amber and Gary’s story for eight years can’t remember a time the two were ever happy, but early in the relationship, before the pregnancy and before MTV, they really were. “Honestly our relationship in the beginning was a fairy tale. It was what everybody wants. We’d sneak out to hang out all night, going to church parking lots and just sitting there for hours, talking and making out […] There was one night when we were at the movies and he was holding onto my hand, kind of petting it with his thumb, and I felt his grip getting tighter and tighter. When I looked over at him, he had tears in his eyes. I was so surprised I asked him if he was okay and what was wrong. And what he said to me was, ‘I’m just so happy that I found you,'” Amber wrote in her book.

It might be shocking now for fans to see Amber once feeling that way about Gary and saying such nice things, but the two went through a lot together. They were extremely different, as Amber was more of a partier and Gary was focused on school and doing well. “He tried to get me back into going to class and doing my work, because I was missing so much that I was getting kicked out and sent to alternative school,” Amber explained. One of the biggest ways that he influenced her was when he helped her to beat her eating disorder. “I always thought I was ugly, and I always thought I was fat. So I’d been starving myself, overeating and then making myself throw up since I was in elementary school. He found out about that, and when we got together I was finally able to cut that behavior out and learn to be a little healthier. I used to tell him when we got together that he saved my life.”

While their relationship included many breakups and makeups, by the time Amber was 17, the two were working hard to get their own place and plan for their future and that is when she found out she was pregnant. Both were virgins when they met, and despite the shock, Gary was very happy when Amber told him she was pregnant, and the pair worked even harder to be able to live a good life with their baby. “I kept working at Wendy’s for as long as I could, and we got our money organized and moved into a townhouse together. He had already started going to classes to become a CNA, and I used to go to the diner with him literally every single night to help him study, just drinking hot tea and quizzing him on his exams. He ended up doing amazing on the test and getting a really good job. That made us really proud.”

When Amber first heard about MTV’s 16 and Pregnant and applied, she had no idea what it was going to become. “We literally thought it was one of those one-time things MTV always does, like True Life, where we were going to be on TV for a little while and everyone would forget about us afterward. Real people are featured on those MTV specials all the time and don’t get famous. We had no way of knowing people were going to jump on it like they did or that it would become this huge phenomenon.” Unfortunately, while Gary and Amber were fine with filming and appreciated the money after the series and their episode aired, things changed. “All the attention was the last thing we expected. Leah’s dad started getting all these messages on MySpace, all of these girls talking to him […] It started out slow but we would end up losing ourselves in the money and that weird kind of fame we had landed in.”

While Gary and Amber had far from a perfect relationship before and after Leah’s birth, the complications of reality TV fame and attention from strangers all came to a head during their first Valentine’s Day after Leah’s birth. According to Amber, it is the day she found out Gary was cheating on her after he left the house on the pretense of going to the mall because he hadn’t had the chance to pick anything up for her for Valentine’s Day. After calling him and finding out he was actually hanging out with some girls, Gary came home and they got in a big fight and he left again only to call Amber. “Before long he called me up crying, or at least acting like he was crying and saying he had something to tell me. You already know what it was, right? ‘I cheated on you.’ Those weren’t girls he just picked up at the mall. He didn’t even go to the mall to get me a present for Valentine’s Day. He went to hang out with those girls because he was messing around with one of them […] Nothing between us was ever the same after that. Something just snapped in me that Valentine’s Day.”

Fans are well aware of the many explosive arguments between Amber and Gary, including the one in which she hit Gary and began their journey with child protective services. Although a lot was seen on camera, fans had no idea how bad it was behind the scenes for the two. “And I know people might think they know how bad it was from what they saw, but what was inside our world, what we did keep from showing other people, was worse. There were times we’d physically fight, both of us. He’d spit on my face and I’d spit back in his face. He’d hold me down and lay on me, all three-hundred and seventy-five pounds, and I’d be fighting and telling him he better knock me out because if I got up I’d beat the hell out of him. That was our lowest point. We hated each other for what we thought we’d done to each other, and we got to just about the worst place in our relationship that you can imagine.” Of what was shown on Teen Mom, Amber added, “Those scenes on Teen Mom of me beating up on Leah’s dad don’t really leave any room for doubt how completely destroyed we were at that point.”

2. After The Break Up

After the two finally called it quits on the relationship, things became more difficult with CPS involved, and for Amber personally, her life spiralled out of control. Her depression and anxiety reached new levels and her addiction to pills really began to take hold, but signing over custody to Gary is what broke her. “After I lost Leah I literally went insane,” Amber wrote. As Amber turned to extreme partying and going out with different guys, Gary started making her believe he wanted her back. “I ended up not giving a shit about Leah’s father anymore. Meanwhile, he was yapping in my ear like a Chihuahua. The man would come over and dig through my trash can for condoms, even though we were completely broken up.” Then, when Gary tried to tell Amber he wanted to get back together, the girl he was messing around with got a hold of Amber, and Amber made Gary choose between them. He chose Amber, but she had no intention of getting back with him. “Decided to stay away from Leah’s father was one of those big decisions I made when I looked around and just had this wake-up moment, and I realized I didn’t want to be stuck in that terrible situation.”

While Amber and Gary had many, many issues, it seems he also pulled her into trying to reconcile their family for the sake of Leah. Although they stayed apart, when serving her jail sentence, Amber truly thought it wasn’t only a turning point for herself, but for her relationship with Gary. While she was in jail, they made a plan to get a place together, and rebuild their family and Amber even sent him $1,000 to find them somewhere to live. It turned out the whole time, however, Gary had a girlfriend and had no intention of getting back together Amber, and once she figured it out, it was the last time she ever gave him a chance.