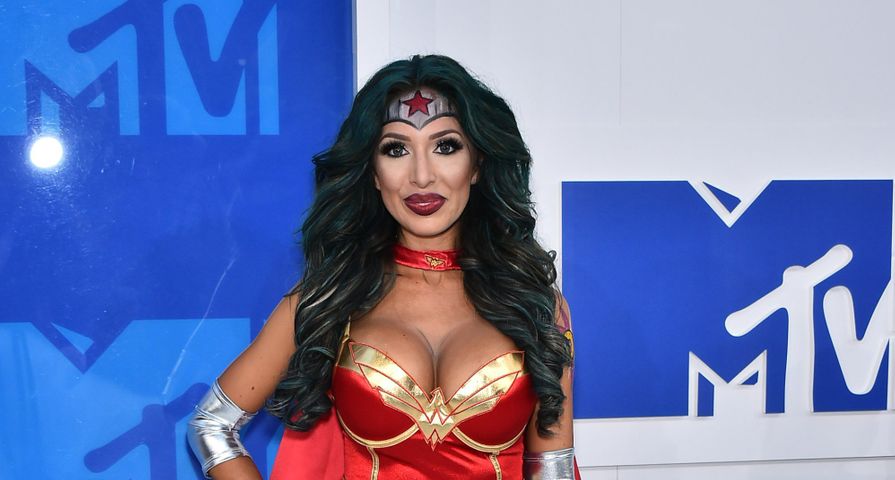 Teen Mom‘s Farrah Abraham is definitely one of the most controversial women to ever star on the MTV reality show and is frequently caught up in the midst of scandal, drama and the consequences that follow. Unsurprisingly, Farrah’s sense of fashion is synonymous with her personality and is quite risky and unpredictable, especially when it comes to the red carpet. Farrah is infamous for taking glitter, fringe and cleavage to an extreme and has definitely landed her on more than a few worst-dressed lists over the years. Follow along for 8 of Farrah Abraham’s worst fashion moments:

The fringe look that Farrah wore to her 26th birthday celebration this past year was not the worst of her looks, but we still can’t say we are the biggest fans. The glittering fringe was distracting and clashed with the silver color of her statement necklace. The headpiece was also a little overwhelming when she wore such a bold necklace.

Farrah Abraham stepped out on the 2016 red carpet wearing a curve-hugging black and gold gown that channeled old Hollywood glamour. We have to admit that this dress is quite flattering and glam, but unfortunately Farrah took it over the top with the distracting cleavage. A dress that had the potential to be quite classy and elegant was instantly taken down a few notches with the overbearing display.

Farrah Abraham took the stage at the Celebrity Big Brother launch wearing a hybrid dress that incorporated elements of both the American and Union Jack flag. The dress was completely covered in sequins and both the pattern and texture made this a surefire tacky fashion moment. She paired the look with multi-color strappy sandals and showed off her cleavage with a plunging neckline.

Farrah Abraham attended the Dr. Miami television show premiere this past year donning a bare-it-all mini dress that definitely turned heads for all the wrong reasons. The dress took inspiration from Elizabeth Hurley’s 1994 safety pin gown and featured its own pin detailing along the bust and skimming her leg. Although the dress on its own isn’t the worst, we would have much preferred if Farrah covered up a little more for this appearance!

Farrah recently stepped out at the MTV Video Music Awards this past year wearing an interesting galactic-inspired look that matched with her daughter, Sophia. The over-the-knee boots she wore were made of a highly reflective gold metallic that was quite tacky and she donned matching glitter flecks on her cheekbones to match. The entire look was a fashion moment that missed the mark and landed her on quite a few worst-dressed lists following the event.

Farrah Abraham definitely stirred up quite a bit of controversy when she stepped out at the 2017 MTV Movie and TV awards donning a Bollywood-inspired look that offended quite a few viewers. The Teen Mom star claimed she hoped her look would “inspire others to embrace new cultures and have good experiences,” but the she almost instantly received flack and comments calling her look cultural appropriation and a desperate cry for attention. Fans fumed as Abraham’s misstep made Bollywood attire seem more like a costume than a traditional cultural dress.

In 2015, Farrah Abraham had her photo taken at Ghostbar Dayclub wearing an interesting outfit that consisted of choppy cutouts, metallic fabric and fishnet stockings. The entire look seemed like quite the mess with slashes, embellishment and loose ends hanging all over the outfit. The super short hemline and revealing under-cleavage made this look even more questionable.

Farrah showed up at the MTV Video Music Awards red carpet in 2016 wearing an exact replica of the classic Wonder Woman outfit. She claimed she was over the typical “business look” that many red carpet celebs rocked and wanted to have some fun with her look. We personally think a look like this is only appropriate on Halloween and would definitely have appreciated a rendition of the Wonder Woman look rather than a full blown costume.