Home » Entertainment » TV » I Love Lucy: 10 Behind The Scenes Secrets 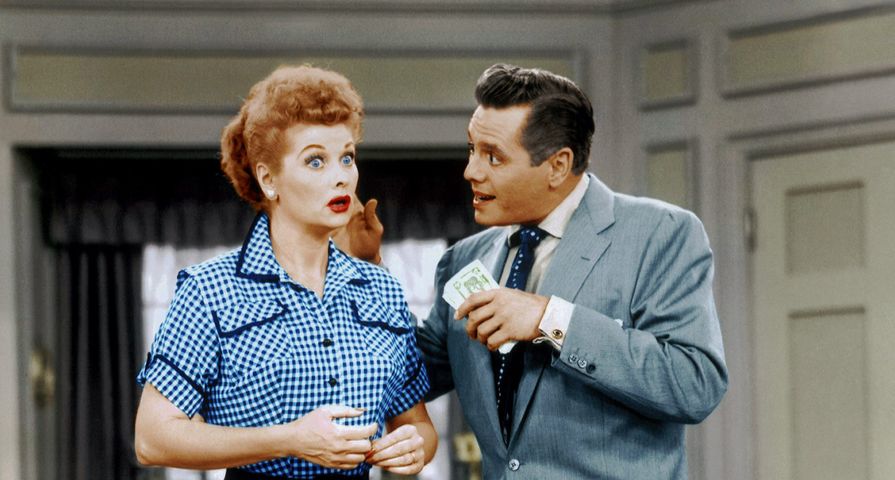 I Love Lucy was a black and white sitcom series that aired on CBS in the 1950s from 1951 to 1957. Starring Lucille Ball, Desi Arnaz, Vivian Vance and William Frawley, the show broke records, won awards and was the most watched show in the United States for four of its six seasons. I Love Lucy lives on through syndication even though it’s been 60 years since the show ended, so here’s a look back at 10 behind the scenes secrets from the series!

Lucy was the only one who was allowed to poke fun at Ricky’s fractured English. It became an unwritten rule on set after only a few episodes of filming. When the writers tried to incorporate other characters into the teasing, it was always met with silence from the audience because it seemed “cruel” for anyone but Lucy to poke fun at her husband’s fractured pronunciation.

One of I Love Lucy‘s best kept secrets is the drama between Vivian Vance and her TV husband, William Frawley, who played the roles of Ethel and Fred Mertz. No one but the series writers and directors knew they despised each other off-camera. It was reported that Vance, who was 22 years younger than Frawley, didn’t like having such an “old poop” play her spouse. In response, Frawley often referred to her as “that sack of doorknobs” or “b-tch.” All of this name calling happened behind the scenes — even their co-stars had no idea!

8. Desi Arnaz Refused To Do This Scene

Desi Arnaz was a firm believer in the American Dream because his family fled to Miami from Cuba when he was 17-years-old with no more than the clothes on their back. They lived in a warehouse with other refugees and got a job cleaning birdcages for a man who sold canaries to pet stores. As a result of his background and strong belief in hard work, he refused to do a scene in the original script of “Lucy Tells the Truth” where Ricky cheats the system by fudging some numbers on his income tax return. He didn’t want his character to be associated with that kind of behavior.

In the episode titled “Job Switching,” which is also referred to as “The Candy Factory Episode,” Lucy and Ethel are caught stuffing their faces with chocolates and clothing to keep up with a conveyor belt. For this episode, stage manager Herb Browar brought in a woman named Amanda Milligan, who worked at See’s Candies on Santa Monica Boulevard. In the script, Milligan had to hit Lucille in the face which worried Lucille because she thought the woman would be too shy to do it, but when the cameras started rolling, Milligan smacked Lucille in the face so hard she thought her nose was broken! During a filming break, she asked Milligan how she liked working on the show as opposed to eight hours a day putting swirls on chocolates all day long, and an unsmiling Milligan reportedly replied, “I’ve never been so bored in my life.”

6. Little Ricky and Desi Arnaz Jr. Were Born on the Same Day

This has to be the biggest coincidence of all time — the perfect example of when life imitates art. Lucille and Desi knew they would be having a Cesarian section because that was how their first child was born, and it just so happened that their obstetrician booked all his C-sections on Mondays, the day I Love Lucy aired. As such, Ball ended up having her second child, Desi Arnaz Jr., on the same night Lucy Ricardo had Little Ricky. To add even more coincidence to it all, they didn’t know the gender of their child, but head writer Jess Oppenheimer decided the Ricardos would be having a boy, so when Lucille and Desi found out they’d had a boy, Desi Sr. called up Jess and said, “Lucy followed your script! Ain’t she something?!”

Even though Lucille and Desi were ecstatic to learn she was pregnant for the second time, the vibe behind the scenes among the production team was much more stressful. A visibly pregnant woman had never been shown on TV, other than in the late 1940s sitcom Mary Kay and Johnny, so many people were worried about the fate of I Love Lucy. Since it would be impossible to hide it, the network decided to write her pregnancy into the show, but deemed the word “pregnant” unacceptable so they had to use the phrase “expecting.” Desi hired a rabbi, a minister and a Catholic priest to sit behind the scenes to make sure the episodes wouldn’t offend anyone.

When Harpo Max was set to guest star on I Love Lucy, Lucille Ball was ecstatic because she was a longtime admirer of his work. When they had to work together things didn’t exactly go as planned. Max worked under the approach of “never the same way twice” with his comedy routines, but Lucille liked to plan everything down to the exact movement. She insisted on doing many rehearsals which Max didn’t like. His attitude was, “I’ve done this bit for 35 years, why do I need so much rehearsal?” Their scene together was one of the few cases where a scene was re-shot several times after the audience had left and then was pieced together by editor Dann Cahn.

10 Things You Didn't Know About The Facts Of Life

Desi Arnaz had a knack for detail. He wanted the show to be as real as possible so the audience would believe it and find it more funny. In the episode “Pioneer Women,” the actors needed to pop an eight-foot-long loaf of bread out the oven, and what better way to portray that than to have an actual eight-foot-long loaf of bread! Luckily the producers found a bakery in New York City that was willing to bake one at a heft cost. The loaf was made of rye bread and was served to the audience after the scene. In another episode titled “Deep Sea Fishing,” Ricky and Fred got into a bet of who could catch the biggest fish, so two 100-plus pound tunas were needed. They purchased them at San Fransisco’s Fisherman’s Wharf and they were air-shipped to Hollywood in child-sized coffins packed with ice.

Many people loved the grape stomping episode “Lucy’s Italian Movie,” but what people don’t know is that Lucille almost died while filming it! They traveled to Italy and hired a local named Teresa Tirelli to be an extra in the episode, but she didn’t speak any English. Her job was to wrestle Lucille in the grape vat, but when the interpreter explained the scene to her something got lost in translation because Tirelli didn’t know the fight was being filmed from the waist up which meant it was a fake fight. Tirelli ended up holding Lucille’s head under the grape mush and nearly drowned her!

Lucy and Ricky slept in twin beds throughout the entire run of the series. In the first two seasons their beds were pushed together onto a box spring to make it seem like they were sharing a bed. After Little Ricky was born, CBS wanted their beds pushed apart to avoid the idea of any sexual history between the two. The only time their beds are together is when they move into a bigger apartment, but afterwards their beds are pushed apart again.