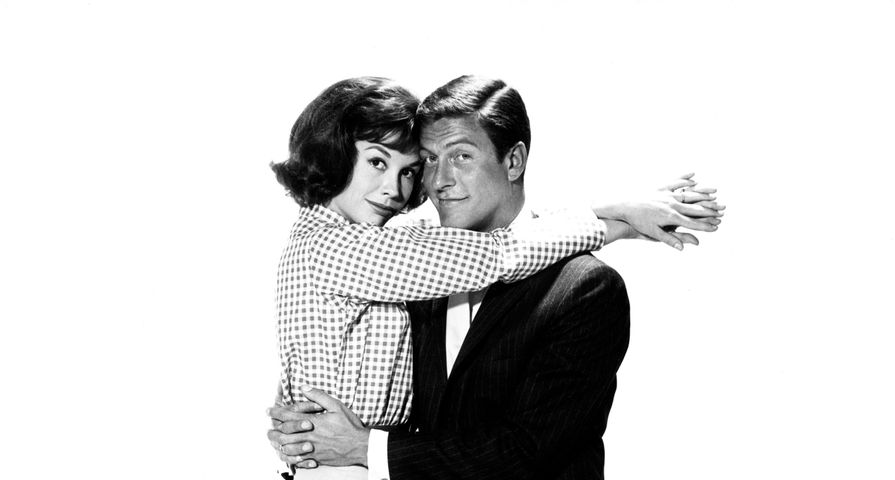 The Dick Van Dyke Show aired on CBS for five seasons from 1961 to 1966. Although the show wasn’t an immediate hit, it became really successful over the course of its five-season run, as it took home 15 Emmy Awards. It’s been over 50 years since the show went off the air, but it’s still considered one of the greatest series of all time, so here are 10 things you didn’t know about The Dick Van Dyke Show:

The 1960 pilot for a series called Head of the Family was the basis of The Dick Van Dyke Show. It essentially had the same characters, but with a different cast. In Head of the Family, Carl Reiner played Rob Petrie, Barbara Britton played Laura Petrie, and Sylvia Miles played Sally Rogers. CBS decided that the main character on the show was too intellectual, too Jewish and too New York, so Carl Reiner was replaced with Dick Van Dyke.

Many of the show’s plots were inspired by creator Carl Reiner’s experiences as a writer for Your Show of Shows and Caesar’s Hour. He based the character of Rob Petrie on himself and then based Rob’s egocentric boss Alan Brady on Milton Berle and Jackie Gleason.

CBS had intended to cancel the show after it’s the first season because the cast and producers wanted to quit while they were still proud of it, but when Proctor & Gamble threatened to pull its advertising, it was renewed and kept its Wednesday night time slot.

The Dick Van Dyke Show was the last show filmed entirely in black and white. It was going to be shot in color after the fifth season, but it never happened because the cast and producers decided to end the show after season five.

Casting for Laura was the most difficult. Over 60 actresses auditioned, including Mary Tyler Moore. She almost didn’t go to the audition, but her agent convinced her to go. Initially, Dick Van Dyke didn’t want Moore to play his wife on the series because he felt that she was too young to play the part convincingly. He changed his mind after the episode “Oh, How We Met on the Night That We Danced” because the characters’ on-screen chemistry became very apparent.

During season two of the show, Kent cigarettes sponsored The Dick Van Dyke Show. Cast members made a series of in-house commercials that touted the virtues of Kent cigarettes as a favor to their sponsor. Dick Van Dyke quickly became uncomfortable about pitching cigarettes on a family show and complained, so the Kent endorsements were eventually phased out.

10 Things You Didn't Know About Dukes Of Hazzard

Although creator Carl Reiner asked network censors for permission to show Rob and Laura sleeping in one large bed together since that is what couples do in real life, the network censors said no, so the Petries were always shown sleeping in nearby twin beds.

When Dick Van Dyke was offered the lead role on the show, he already had a job on Broadway in Bye, Bye Birdie. He initially was reluctant to leave the position in case the show got cancelled because he didn’t want to be another out of work actor, but Carl Reiner’s enthusiasm for the show persuaded him and he agreed to star in the pilot and took a one week break from Bye, Bye Birdie. During rehearsals, Van Dyke was so stressed out that he lost five pounds and developed a cold sore on his lip. The cold sore required additional makeup to cover it up.

Things You Didn't Know About 'The Waltons'

Even though most stay-at-home moms on the small screen were wearing dresses and heels, Mary Tyler Moore’s character, Laura, defied convention by wearing capri pants. “I had Laura wear pants, because I said, ‘Women don’t wear full-skirted dresses to vacuum in,’” she told TV Guide in 2004. “CBS said, ‘You know, we’re afraid that housewives are going to be a little annoyed because she looks so good in pants.’ So they made Carl [Reiner, the show’s creator] promise not to let me wear pants in more than one scene. We went along with that for about three episodes, and then finally, I was just wearing the pants. We got the absolution of men everywhere and women kind of breathed a sigh of relief, too, and said, ‘Hey, that’s right. That’s what we wear.’” Capris became Laura’s trademark and, as a result, a huge fashion trend of the early 1960s.

9 Things You Didn't Know About The Original Charlie's Angels Series

Morey “Buddy” Amsterdam and Richard Deacon — who played Maurice “Buddy” Sorrell and Melvin “Mel” Cooley, respectively – were actually close friends in real life. According to Deacon, they would go out for drinks after work and that is where they would come up with the best insults that Buddy hurled at Mel.