Things You Might Not Know About ‘All In The Family’ 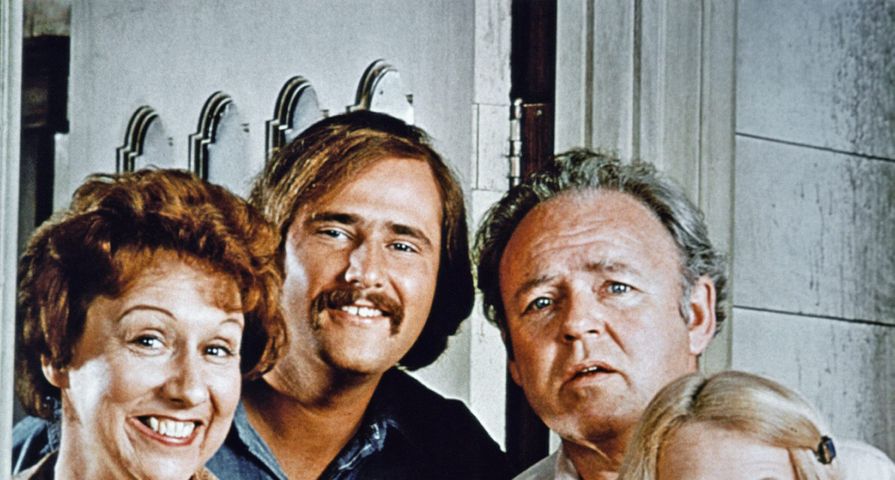 From 1971 to 1979, All in the Family enjoyed a nine season run on CBS before being replaced by Archie Bunker’s Place. The show was unlike anything that American sitcoms had tackled before with the focus on the extremely bigoted Archie Bunker, whose polite wife, daughter and son-in-law constantly try to teach him the wrongs in his thinking. Despite some serious issues and reservations at first, the show became one of the most iconic for that generation and has gone down in TV history! Take a look back at the popular series with 10 things you didn’t know about All in the Family:

Despite reservations, once All in the Family got going it became extremely successful, but getting it going wasn’t as easy as it may seem. Conception for the series began when Norman Lear read about the British sitcom Til Death Do Us Part, prompting him to buy the rights for the show and incorporate his own experiences to create an American version. Lear called his original pilot for the series “Justice For All,” which was a pilot for ABC, and while they approved, they gave money for a second pilot to be shot instead called Those Were the Days. Those Were the Days featured new actors for Gloria and Michael while Caroll O’Connor and Jean Stapleton remained in the lead roles. Unfortunately, after the second pilot, ABC became concerned about having a “foul-mouthed, bigoted lead” and rejected the series entirely. Luckily, CBS immediately bought the rights from ABC and had the final cast set and the pilot for All in the Family filmed.

After its own incredible success, All in the Family lived on with many spin-offs and actually has more spin-off series than almost any other television show. Its spin-off series include Maude which then had the spin-off Good Times. It also had The Jeffersons which spun-off Checking In, and then there were Archie Bunker’s Place, 704 Hauser, and Gloria. The only other series that has a similar amount of spin-offs stemming from one show is the iconic series Happy Days. While The Jeffersons proved to be the most successful All in the Family spin-off, it wasn’t without its drama. In an interview years later, Isabel Sandford, who starred as Louise Jefferson, revealed that she was forced into doing the spin-off because at first she declined the offer and just wanted to stay on All in the Family. With that producers then told her that she would be written off All in the Family if she didn’t agree to the spin-off. “That made my decision easy,” she explained.

When the series was first being shopped by ABC, they wanted Tom Bosley, Jack Warden and Jackie Gleason for the lead role of Archie Bunker. The creator Normal Lear, however, wanted child actor Mickey Rooney to take on the character, but Rooney was deeply offended by Archie and told Lear, “Norm, they’re going to kill you, shoot you dead in the streets.” After his refusal, Carroll O’Connor was asked to read for the part and landed it, but he didn’t have high hopes for the series. When it came to casting Gloria, Rob Reiner had already been cast as Michael, and his then-girlfriend Penny Marshall was one of the last two actresses up for the role of Gloria along with Sally Struthers. Both women were called in to do readings with Reiner, and because of Marshall’s obvious chemistry with Reiner, Struthers thought there was no way she was going to get the role anyway. After landing the part, she asked years later why they chose her and a producer told her that Marshall’s reading had been better, but she looked too much like Jean Stapleton (Edith) and Gloria as a Daddy’s Girl should look like her father, so Struthers got the part because she had “a fat face and blue eyes like Carroll O’Connor.”

CBS, Norman Lear, and the producers were fully aware that many were not going to like All in the Family’s tackling of major issues through the main character of the racist, sexist and homophobic Archie Bunker. Before each episode there was a disclaimer that read: “The program you are about to see is All in the Family. It seeks to throw a humorous spotlight on our frailties, prejudices, and concerns. By making them a source of laughter, we hope to show—in a mature fashion—just how absurd they are.” The series prepared for surefire backlash by hiring dozens of additional operators on the switchboard to deal with outraged callers, but the backlash never came. In fact, to the shock and some horror of the network, fans embraced Archie Bunker instead of being offended by him and the book “The Wit and Wisdom of Archie Bunker” became a bestseller.

Rob Reiner was only 24 years old when he landed his iconic role as Michael “Meathead” Stivic in All in the Family. Despite his young age, Reiner actually began losing his hair rather quickly, and by the time they were halfway through the very first season, he started having to wear a hairpiece!

In the third year of All in the Family, the series ran into trouble when a salary dispute began with their lead star Carroll O’Connor. According to reports, O’Connor stated that he was owed $64,000 of backpay and wanted 12 weeks vacation out of his 24-week work schedule. With the dispute raging, Lear went ahead and filmed three episodes without Archie and began working on a scenario where they would just kill off his character if the dispute wasn’t settled. Lear went as far to create the character of Stretch Cunningham, Archie’s friend, who would move in to the Bunker’s house to be the male leader of the family. When O’Connor did return, however, James Cromwell, who played Stretch, revealed in an interview that O’Connor requested Stretch be written off the show. “I was getting too many laughs. Actually, he did me a great favor, because I might have ended up as another Fonzie, an actor totally identified with one character,” Cromwell said.

Even though everyone involved in the show expected blowback from the audience and Carroll O’Connor was sure it wasn’t going to last and some wouldn’t accept roles because they thought it was doomed, All in the Family completely surprised everyone and is now considered one of the best TV series of all time. From 1971-1976, the series ranked at the top of Nielsen’s yearly ratings, and became the first television series to ever reach the milestone of topping the Nielsen ratings for five years in a row. All in the Family ranked number four on TV Guide’s 50 Greatest TV Shows of All Time, and Bravo named Archie Bunker the greatest TV character of all time. Most recently, in 2013, Writers Guild of America ranked the series the fourth-best written TV series ever.

Of all the seasons, episodes and hilarious moments, it was actually Sammy Davis Jr. who caused the longest laugh from the audience recorded on the series. In real life, O’Connor and Sammy Davis Jr. were close friends and All in the Family was his favorite TV show and Davis Jr. asked O’Connor to get him on the series. In season two he appeared in the episode “Sammy’s Visit” in which he tells Archie that he isn’t prejudiced, and at the very end asks for a picture with his friend Archie and on the count of three he kisses Archie on the cheek! The kiss and Archie’s reaction elicited the loudest and longest laugh in the history of the entire show.

A year after Carroll O’Connor’s dispute, Sally Struthers also had issues working on the show. In 1975, Struthers wanted to audition for the lead role in the film The Day of the Locust, but All in the Family producers would not allow her the time off if she was offered the role. Because of their decision, Struthers took Tandem Productions to court, however it was in her contract that she was prevented from appearing as an actress or celebrity in anything other than All in the Family. As a result, Struthers was only absent from two episodes while the dispute was settled.

While Carroll O’Connor may have stolen the show as Archie Bunker, equal credit is due to Jean Stapleton for her portrayal of his wife, Edith Bunker. What many didn’t know about the star was that even though her poor singing was often joked about as Edith, in real life Stapleton was a trained singer and performed in many musical theatre productions. It also turns out that the series almost happened without her because at the time she was also offered the role of Mrs. Teevee in the classic 1971 film Willy Wonka & the Chocolate Factory, but decided to take the role of Edith instead.