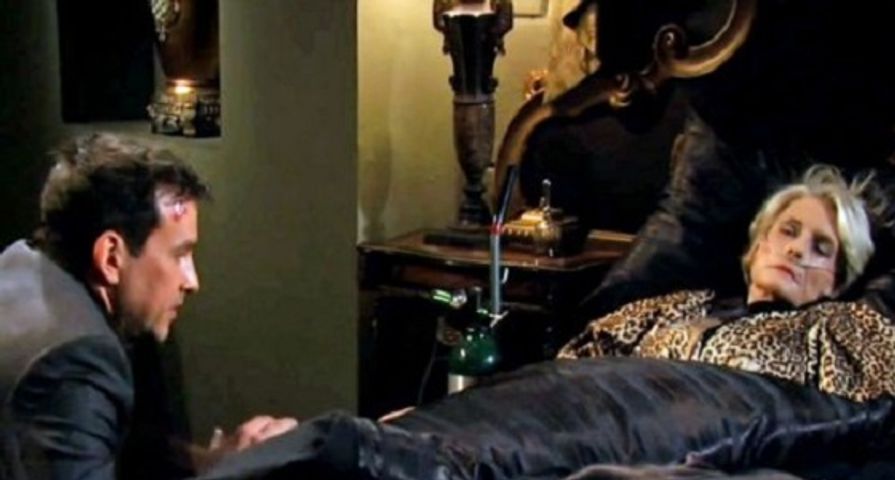 Soap operas can be a little outrageous sometimes. The crazy adventures our heroes and heroines embark on, the romantic settings can be over the top, not to mention outrageous storylines. It is no surprise that soap opera deaths can be quite unbelievable at times … more unbelievable are the ways characters can come back to life. Port Charles is no exception to this rule, and some characters have died in some pretty outlandish ways over the years. As such, below is a list of seven of General Hospital’s (GH) most ridiculous deaths.

Being an eccentric family on their own, the Cassadines hit this list a few times, and you’ll see a couple of entries when it comes to Stavros. The first one to make the list is Stavros death via a bottomless pit. In late 2001, after Helena trapped various GH characters (including Luke and Nikolas) in an underground lab, Luke and Stavros had a bit of struggle and the Greek was left dangling over a bottomless pit. Stavros had his final laugh at Luke by simply throwing his hands in the air, causing him to fall into the abyss. Which leaves a few questions, since Stavros did end up ‘coming back’ from this in 2013. First off, how does one escape a bottomless pit? Secondly … do bottomless pits really exists? Perhaps in the land of daytime drama they do!

In October 2012, GH fans were shocked when Jason Morgan was shot and fell into the water near the docks. Clearly, he should’ve been a goner, but as we learned years later, that wasn’t exactly the case. The most ridiculous aspect of Jason’s death was not how he was killed, but by whom. It was later learned that Cesar Faison was the one who shot Jason Morgan. He had been wandering around Port Charles disguised as Duke Lavery!

How many soap operas have killed off characters being thrown off a cliff? Well, this is one has a bit of a twist. When it comes to GH, Wyndemere Castle can be a deadly place. So many characters have died off cliffs or in that house, it’s ridiculous. Well back in 2003, Stefan carved another notch in the Wyndemere death belt when he had a scuffle with Luke. Luke stabbed him, which should have killed him, but in dramatic fashion, Stefan ended falling off a cliff to his death. In true soap opera style, Stefan whispered some creepy words to Luke right before he plummeted to his death.

Can you imagine dying twice … from the same thing? Well, that’s what happened to Katherine Bell! In 1998 she died when she fell from a parapet. The entire incident shook Port Charles and her fiancé Stefan Cassadine went to trial for her murder. Meanwhile, matriarch of the family Helena took Katherine and gave her an experimental medicine that brought her back to life. Ironically, about a year later, Helena would be the one pushing Katherine down that very same parapet to end her life for good. This was a plot to prevent Katherine from marrying her grandson Nikolas.

Speaking of Helena, while she’s plotted many an evil schemes in her life, her downfall ended up being her overconfidence. During the entire Jake Doe/Jason Morgan storyline, Jason/Jake was desperate to find out who he really was. In turn, Nikolas was desperate to keep his true identity under wraps. He then went and poisoned his own grandmother to ensure she wouldn’t spill the beans. Who knew someone would go to such great lengths to keep a secret all hush-hush.

2. Frozen To Death – The Original

This puts a whole new meaning on the idea of freezing to death. For one reason or another, the Cassadines have always been quite obsessed with freezing things, perhaps the cold never bothered them. Regardless, the Cassadine/Spencer feud began years ago, when Mikkos entered the picture in 1981 with an idea to freeze the globe for world domination. After a struggle with Luke, Mikkos met his fate when he was thrown into his freezer chamber … and left to die. The world was saved, but a new chapter began in the rivalry between the Cassadine and Spencer families … one that still unfolds today.

Sadly, Stavros met the same fate as his father in 2013 when he kidnapped Lulu and hauled her off to Cassadine Island. He was obsessed with Lulu, as she reminded him of Laura and he wanted to start a new life with her. Lulu was frozen in a cryogenic chamber, and thankfully Dante, Laura, and Luke were able to save her, but during the ordeal, Stavros was knocked unconscious by Luke and thrown in a frozen room, while Laura lowered the temperature even more so that Stravros could die.