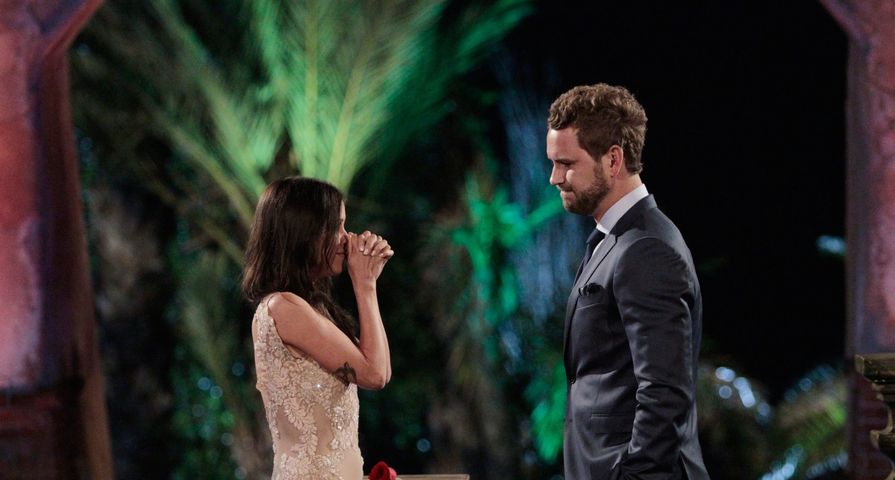 In the 14 years that The Bachelor spin-off, The Bachelorette, has been on the air, fans have been treated to plenty of drama — arguably even more than on The Bachelor. Since every season brings even more drama than the last, we’re counting down the Top 7 Fall-Off-The-Couch Moments in Bachelorette history. Enjoy!

Before there was Nick Viall, there was Chris Bukowski, the original former contestant to show up at the bachelorette pad uninvited. And unlike Nick, Chris really did seem to crash the first cocktail party, unbeknownst even to the producers. As usual, there was a dramatic commercial break, as viewers were forced to wait to find out if Bachelorette Andi Dorfman would let the rejected suitor from Emily Maynard’s season come inside, and in a move that won the approval of most fans, Andi asked Chris Harrison to send Bukowski away without so much as talking to him. Humiliation and rejection — what more can you ask for from reality TV?

6. Country Crooner Wes Hayden Reveals He Has A Girlfriend

The Golden Rule for contestants on The Bachelorette has always been, “Thou Shalt Not Have a Girlfriend Back Home,” and bad boy country singer Wes Hayden was the first to break this taboo on season five (or, at least, the first to admit it on camera). He originally denied his girlfriend status when confronted by Bachelorette Jillian Harris, earning him an extra week in the house, but when Jillian finally came to her senses and kicked him to the curb, Wes let it all out during the cab ride of shame, bragging that he was “the first guy ever on The Bachelorette to make it to the top four with a girlfriend.” And then he tried to promote his music career. Seriously, like that was going to work.

5. Rated-R Wrestler Justin Rego Has Not One But Two Girlfriends Back Home

As if having a girlfriend at home wasn’t bad-ass enough, beefed-up Canadian entertainment wrestler, Justin “Rated-R” Rego was busted for having not one, but two girlfriends back home (one he was cheating with on the other). This was all revealed when season six Bachelorette Ali Fedotowsky received a phone call from Justin’s girlfriend, Jessica, who told her that she’d recently found out Justin was cheating on her with yet another woman. An irate Ali confronted Justin, who denied the allegations, but lovey-dovey voice messages captured by the producers proved Justin had been communicating with Jessica all along, as the three-timing bozo hobbled off (he had a cast on one foot due to a sprained ankle) into most-hated-bachelor-contestant history.

4. Contestant Kasey Kahl Gets A Tattoo For Ali Fedotowsky And Then Gets Eliminated

From slime ball cheaters, we go next to one of the most cringe-worthily naïve contestants to have ever appeared on The Bachelorette, poor Kasey Kahl. The dude had an unbelievably embarrassing date with Bachelorette Ali Fedotowsky, in which he sang off-tune for her and she almost sent him home, so in order to try to redeem himself, he booked it to a tattoo parlor where he got a six-inch wrist tattoo for Ali of a heart being protected by a shield. “I’m wearing my heart and my emotions literally on my sleeve,” he told the other contestants in the house after returning with a Band-Aid over his new ink. Unfortunately for Kasey, Ali was not impressed and sent him packing at the rose ceremony. So, so sad and awesome at the same time.

3. Nick Tells The World That He Slept With Andi

And finally, we arrive at two-time contestant Nick Viall, who has provided Bachelorette fans with more drama than any other contestant in the history of the show. You’ve gotta love Nick, even if you hate him. The first shocking moment courtesy of Nick came at the end of Andi Dorfman’s season when jilted runner-up Nick broke the second major Bachelorette taboo, “Thou Shalt Not Talk About Having Sex In The Fantasy Suite,” by doing exactly that on the live season 10 After the Final Rose episode. “If you weren’t in love with me, then I’m just not sure why you made love with me,” Nick whined as Andi shot death rays at him from her eyes, forever dispelling the illusion that couples use the Fantasy Suite to talk all night long so they can really get to know each other. Audiences everywhere were downright shocked — though hopefully not as much at what he was admitting to than the fact that he would stoop so low as to call Andi out on live TV. Oh, the drama!

When much reviled Nick Viall from Andi’s season showed up midway through Kaitlyn’s season (season 11), hoping to get a chance with Kaitlyn, whom he’d exchanged some texts with before she was cast as the Bachelorette, fans of the franchise couldn’t believe it. It seemed so unfair to the other guys if she let him come on…but let him come on she did. And it didn’t end there. Every time they were together, these two couldn’t keep their hands off each other. Then, when Kaitlyn picked Nick for a One-on-One date, adding fuel to the already fiery anti-Nick sentiment in the rest of the house, she made the most controversial move in Bachelorette history by inviting Nick to come back to her room with her afterwards. The fact that the clearly soused couple forgot to turn off their mics left no question as to what they were doing, and the always frank Kaitlyn admitted on camera that she might have gone too far with Nick the next morning. Tension and drama ensued and Nick was ultimately dumped for a second time, when Kaitlyn chose Ryan Gosling lookalike Sean Booth over him in the end.

1. The Bromance Between Clint and JJ

After watching season 11 contestants Clint Arlis and JJ Lane spend countless hours soaking in the hot tub together, popping each other’s zits in the shower and close-talking at an ever decreasing distance, the other guys in the house were quick to jump on the idea that there might be more to their friendship than just your typical bromance. Then, when Clint went on camera to say, “It’s absolutely insane. I never thought that I’d meet somebody like that,” adding, “Falling in love with a man never crossed my mind,” it was — hands down — the craziest thing fans had ever heard before on the show. No doubt, many grabbed their PVR remotes and rewound the clip just to make sure they’d actually heard what they thought they’d heard. Clint then went on to say, “Kaitlyn’s not the right girl for me. I love JJ, so I need the rose tonight.” Unfortunately for those viewers who wanted to see where things between Clint and JJ might lead, Kaitlyn sent Clint home before The Bachelorette could turn into a slightly classier version of A Shot at Love with Tila Tequila. Sigh. It sure was great while it lasted, though. 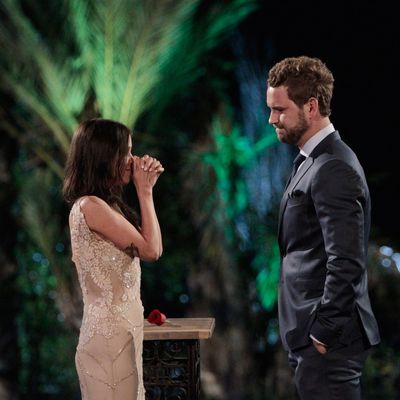