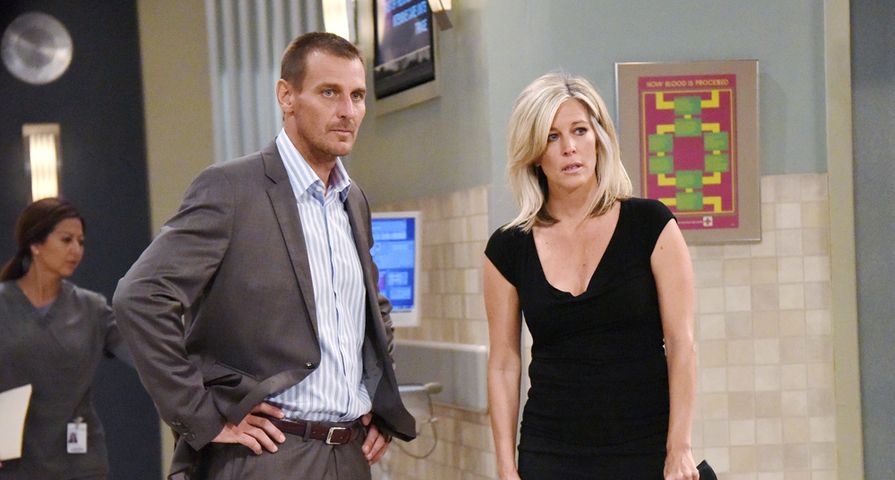 Calling all General Hospital (GH) fans! As Port Charles (and the Corinthos family) gear up to say their final goodbye to Morgan, Nelle continues to be up to no good, Charlotte’s paternity is up in the air (again), and Alexis’ boozing problem almost leads to danger for another character. Read on to find out about these stories and so much more in the GH spoilers for the week of November 7th.

As Morgan’s funeral gets closer and closer, Nelle gives Carly and Sonny a journal she has found that was Morgan’s. The journal gives insight into Morgan’s thoughts during his final days in his own words, and sadly it is disturbing. As Morgan’s funeral gets closer, Carly continues to lean on Nelle. So much so that Nelle approaches Michael with concerns about his mom. It seems that this is just more of an opportunity for Nelle to get closer to the family for whatever she has planned up her sleeve. Kiki continues to feel guilty about Morgan’s death, and Dillon supports her and remains patient. An uninvited guest shows up to Morgan’s funeral causing some drama.

This week, Sonny is inching closer to plans around suicide as Morgan’s funeral nears. He approaches Griffin to confess his sins and Griffin becomes quite worried about Sonny. Griffin goes to Carly … but will she even care? In other funeral news, Josslyn is lined up to sing at her half-brother’s funeral and her dad Jax returns this week to attend these services. Speaking of Jax, he sees something that he finds unsettling this week. Could it be something about Nelle? Or maybe Alexis dipping into the liquor? It’s also important to note that Alexis does turn to the bottle in a bad way this week, placing someone she loves in a dangerous situation.

GH viewers will get more insight on the night Morgan died this week. Curtis has more news on the bomb and JaSam come up with a new theory. Max also give Jason some insight. He re-tells the sequence of events that occurred that fateful night when Julian Jerome’s car exploded and Michael was near it. Speaking of Sam, she continues to worry about Alexis’ drinking habits as of late, and she may have a very good reason to.

Griffin will receive some unexpected news when it comes to Charlotte’s paternity, and it seems that Valentin Cassadine may be able to take the child soon. Speaking of Charlotte, Nathan gets a letter from Claudette that reveals she is gone for good. It seems that Brad Cooper is back to give this DNA news to Griffin that will throw his life into a tail spin.

Lulu and Dante share a romantic night. They also discuss the possibility of remarriage now that their embryo dream is a thing of the past. Word is that Jazmyn Skye Vale is on GH set currently, shooting scenes as Lulu’s embryo baby, Athena. Spoilers indicate that Charlotte is not Lulu’s child, as the timeline is out of whack for that storyline. Speaking of babies though, spoilers reveal that Nina is desperate for some of her own, and she may turn to Valentin for this and soon.

Things get heated with Franco and Liz when she asks him for a favor. Alas, he also comforts her this week when some bad news hits. The person threatening Ava via text will also be revealed this week. It also seems Hayden falls into some danger; however, Liz, Finn, Laura, and Tracy work to help her. In other news, in-hospital fighting worsens an emergency at GH. Dr. Obrecht sets Finn up as a target, again. GH fans will see sparks fly between Jordan and Curtis.