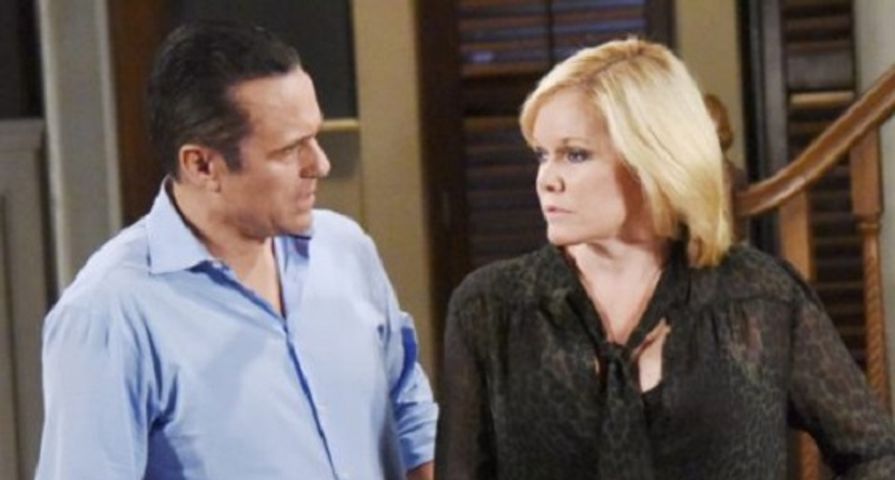 Calling all General Hospital (GH) fans! As we enter the month of February, things continue to heat up in land of Port Charles. Learn more about what will happen to Jason, Sonny, Alexis, Franco, Liz, Sam, and the Jeromes in the below GH spoilers for the week of January 30th.

After Sam finds out that Jason was poisoned, she worries about him and desperately goes searching for him. Jason reaches out to pal Sonny and they devise a plan to trick Julian. Jason wants to pursue the mob case he is on and he decides to hide his very pregnant wife at a safe house while he and Sonny try to pull one over Julian. Sonny has a checkup at the hospital during the same time Julian does, so he and Jason have a “fight” for Julian’s viewing pleasure. Jason says he refuses to do Sonny’s dirty work around the bomb case. Julian takes the fight, hook, line, and sinker.

Speaking of the case, Curtis is back in Port Charles and ready to help Jason with the investigation again. One thing though, he can’t stop thinking about Jordan and how close they got to *almost* making love last week. Jason informs Curtis to keep an eye on Julian. They feel like Julian is the key to finding out who the new mobster is. Sonny has a conversation with Ava and grills her on what Julian is up to and the new mobster. Ava has no clue, but she does worry that Sonny has figured out her role around Morgan and his meds.

Alexis starts to remember a few things from her recent drunken blackouts and she figures out that she did not murder Tom Baker. She is released by the Port Charles police with Julian and BFF Diane by her side. Still, despite this coming to a close, Alexis is still in for some drama. Someone who is up to no good will sponsor Alexis at an AA meeting. Dear old Olivia (Jerome) will focus in on Alexis as a way to punish her brother Julian.

The good news is there will be some resolution around Tom Baker’s death. Bad news is there will be some drama along the way. But the ending to all this does have a silver-lining! Sam saves Franco from the storage unit, but Liz is still missing. While they aren’t together, both Liz and Franco come to the realization that Tom was killed by his brother Seth. Still the problem remains that Seth grabs Liz when he is confronted by her about the situation. Franco leaves the hospital to save Liz, finds her at the Baker home, and beats up Seth. Dante arrives on the scene to take Baker to the station and all’s well that ends well. This Baker situation comes to a close, but not before Liz and Franco have a heart-to-heart and the two finally make love for the first time.

2. Valentin Is Upset At Lulu

No surprise here: Nina is worried about step-daughter Charlotte as the child doesn’t seem right after Lulu told her that she was her mother. Valentine is livid about the entire situation, feeling that she traumatized her before she was ready to hear the truth. Nina just wants to do right by Charlotte and she makes that opinion clear this week. In other Valentin news, Anna has a confrontation with Valentin this week and is horrible to him. Anna also chats with Laura, who is worried about Charlotte and Lulu, too. In other Cassadine news, Nina isn’t too fond of Anna’s ‘interest’ in Valentine and wonders what her motives are.

Someone reaches out with a romantic gesture towards Nelle … could it be Michael? Either way, Bobbie still isn’t too impressed by Nelle and wants her far away from daughter and grandchildren. As such, she calls up an old buddy to figure out what Nelle is really up to. In other news, Olivia (of the Falconeri variety) turns to Carly for advice.