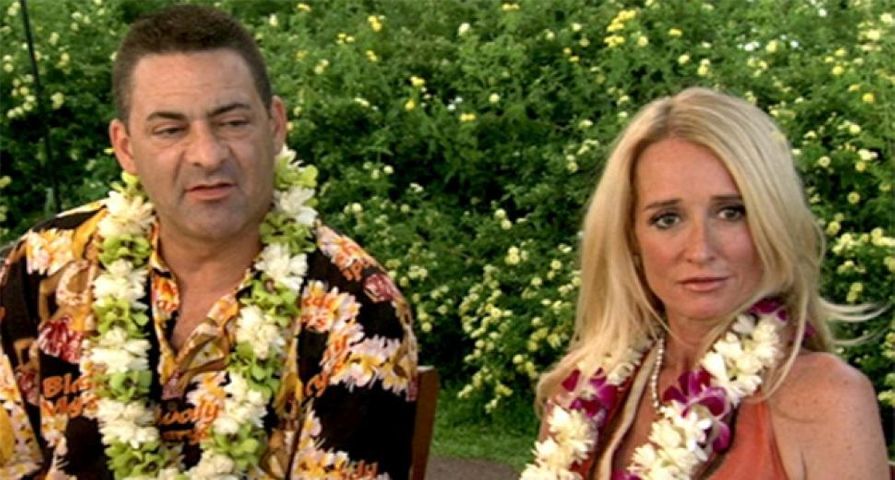 Bravo’s reality television series of Real Housewives has been on the air for over a decade. As a result, we have not only seen a lot of women come and go from the shows and their friendships, but we’ve witnessed the end of a lot of relationships and even some marriages. This list takes a look back at the forgotten relationships that were at one point featured on the show, some of these date all the way back to the first episodes! Here’s a look at the top 10 most forgotten Real Housewives relationships:

Vicki Gunvalson was married to Donn during her first few seasons of The Real Housewives of Orange County. We’ve been so caught up in the Brooks drama that continues to ensue, we almost forgot about Donn! These two had a lot of cringe worthy moments on camera, and a lot of people weren’t surprised when they announced their divorce in 2010 after 16 years of marriage.

Before Kandi married Todd Tucker, The Real Housewives of Atlanta star was engaged to Ashley Jewell (also known as A.J.) who appeared on the show regularly. Kandi’s mother strongly disapproved of their relationship, and it eventually ended on good terms, but he passed away shortly after filming after a tragic bar fight in Atlanta.

One of the nastiest divorces in Real Housewives history was between Tamra Barney and Simon. It’s been a while since we’ve seen Simon, but in the first few seasons he was filmed alongside Tamra as her controlling husband. Their relationship was extremely toxic and continues to be today as she sometimes refers to him on the show and their ongoing custody battles. Simon is no longer filmed on the show and Tamra is now married to Eddie Judge.

We’ve been calling LuAnn the Countess for so long we almost forgot where the title even came from! Before she began flocking around with French men who look like Johnny Deep, she was married to Count Alexandre DeLesseps, the father of her children. The two divorced in 2009 after 16 years of marriage amidst rumors of infidelity. LuAnn then moved on to her boyfriend Jacques Azoulay, but they too split in 2013.

6. Carole Radziwill and the Rockstar

Long before Carole started her fling with the cute, 20-something chef named Adam, she was in a “relationship” with musician Russ Irwin, a member of Aerosmith. He was rarely filmed on the show, but nonetheless the two were in some sort of long-distance relationship.

Lauri Peterson was one of the original housewives of Orange County. If we jog our memory back to to the early 2000s, we remember that Lauri dated Slade Smiley, who is notorious for dating the women on the housewives. Lauri is now married to a man named George, and Slade has been in a relationship with former housewive Gretchen Rossi for many years. Their relationship was brief and happened while he was on a break from another former housewife, Jo De La Rosa. No one is quite sure how long it went on for, but that it ended pretty badly! Yikes!

Before Kim Zoliack married her NFL hubby, Kroy, she was involved in a mysterious relationship with a married man named “Big Papa.” Apparently he was a celebrity who supported her lavish lifestyle while married to someone else. He never appeared on camera and no one ever met him, but he was there! She left the series happily engaged to Kroy Biermann and pregnant. The couple now has their own Bravo spin off show, Don’t Be Tardy.

Slade Smiley has dated three women from The Real Housewives of Orange County, but his first relationship was with Jo. These two dated for the first two seasons — they briefly broke up which is when he moved on with Lauri, but he later got back together with Jo. When she left the show, the couple was offered their own spin off series called Date My Ex, but the show never took off. Jo has moved on and is engaged to Mark Lovette and Slade is now engaged to Gretchen Rossi.

Before Gretchen hooked up with Slade, she was linked to a much, much older man, Jeff Beitzel. When Gretchen first appeared on The Real Housewives of Orange County, she was engaged to Jeff, who has since passed away. Gretchen received a lot of backlash from the other housewives for this relationship. She was deemed a ‘gold digger’ for dating a man who was significantly older than her and was terminally ill.

This relationship was doomed from the beginning and evidently didn’t last very long, but Ken still made it into a number of episodes on The Real Housewives of Beverly Hills. These two had the strangest relationship and it all happened in the midst of Kim’s spiraling down addiction. Ken showed up seemingly out of no where during one episode when Kyle Richards went to her house to help move her things. Kyle was more than happy when the couple split, and in a recent interview with Radar, Ken, who is now engaged said he recently lost touch with Kim, but that he wishes her well.